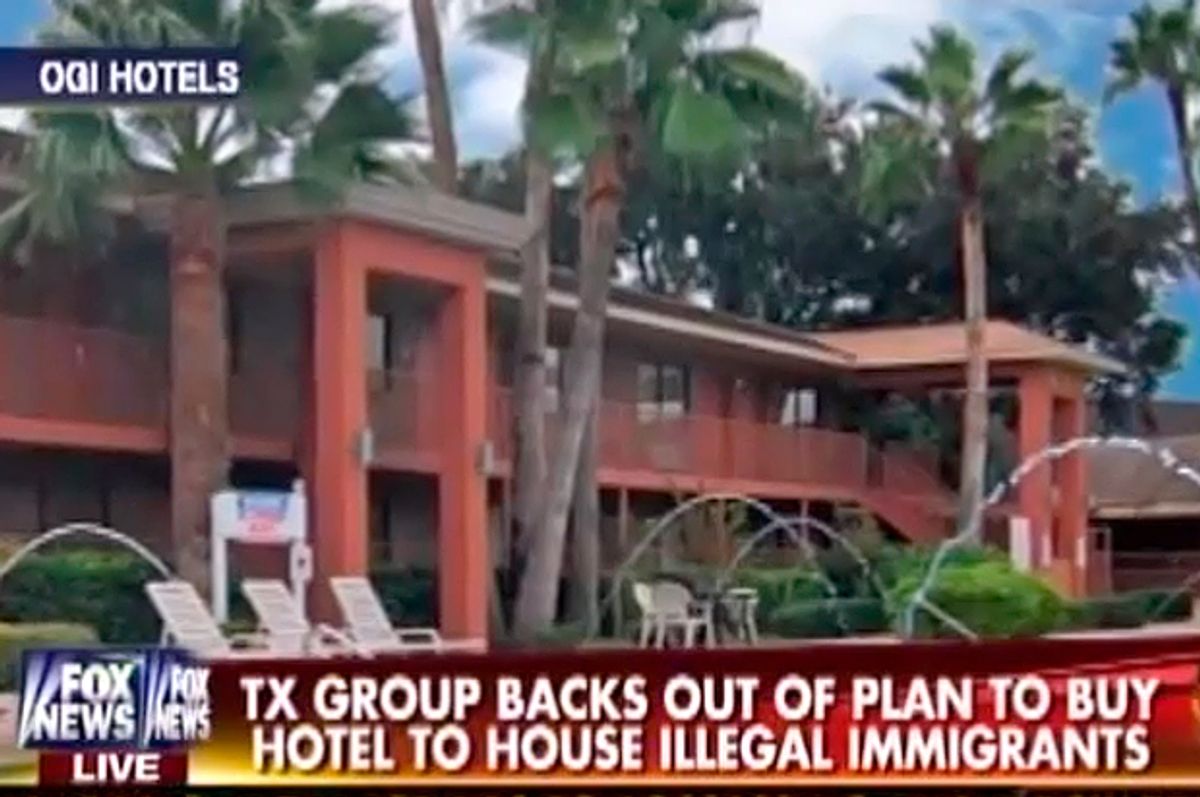 A Baptist charity last week submitted a bid to purchase Weslaco, Texas's Palm Aire Hotel & Suites for approximately $3.8 million in nongovernmental funds. The group, Baptist Family & Child Services, intended to convert the 600-bed facility into a dormitory for child migrants detained at the border, where it would house them for 15-day periods, "providing medical and mental health care, on-site educational programs, recreational programs and case management." As of earlier this week, the group was preparing for a hearing before the city of Weslaco's zoning board in order to secure a conditional permit. BCFS already runs a facility in Harlingen, Texas, but wanted to relocate.

Yesterday, however, BCFS abruptly pulled its proposal, citing "negative backlash caused by information misreported to the public." What misreported information could they be referring to? Maybe stories like these: "FEDS TO OPEN $50 MILLION RESORT FOR ILLEGAL CHILDREN."

Such was a headline on conservative blog The Gateway Pundit, domain of the Dumbest Person on the Internet, Jim Hoft. The guest post in question -- picked up by the Drudge Report -- was written by Kristinn Taylor, who appears to meet the site's quality standards.

The Obama administration has awarded a $50 million contract to a charitable group to buy a Texas resort hotel and transform it in to a 600 bed facility for juvenile illegal aliens.

The beautiful Palm Aire resort and hotel has an indoor Olympic sized pool and an outdoor pool.  Free Wi-Fi and cable TV are included in the simply decorated guest rooms. [...]

The hotel is described elsewhere in conservative media as a "$50 Million Illegal Alien Resort Spa," "multimillion-dollar hotel complex," "luxury lodging" and a "fancy hotel." (Those last two, oddly enough, are from the same story that also describes the Palm Aire as "not exactly Club Med.")

While the Palm Aire is indeed a "multimillion-dollar" hotel -- 600-bed commercial properties typically do run at least into seven figures! -- descriptors such as "resort," "spa," "resort spa," "luxury," and "fancy" do not seem to be the case. Here's a good rule of thumb: If a charity is able to come even close to buying a 600-bed commercial property to turn it into a fenced facility to house migrant children, it's probably fallen into a bit of disrepair and isn't exactly the object of a international bidding war. Steve M. of No More Mister Nice Blog notes that reviews on Google and TripAdvisor suggest the rooms have mold, insect, plumbing and staining problems; those who do find the accommodations acceptable cite such things as proximity to shopping outlets, not black-tie caviar orgies. But hey, it's got internet access, cable TV, and a pool -- fit for the Queen!

Hidalgo County leaders, including Judge Ramon Garcia and Pct. 1 Commissioner A.C. Cuellar, have been proponents of the project.

“I think we could use something like that in Weslaco,” Cuellar said. “Anytime that humanitarian problems happen I’m interested, especially when it involves kids.”

He added that the project, which BCFS said will employ 650 people and have an annual economic impact of some $50 million, would be a major development boon.

BCFS would not have been taking home $50 million in this project. That's not how "charities" work. What they would be doing is purchasing the facility, renovating it to serve its needs, and hiring staff, something county leaders suggest could "have an economic impact of some $50 million." As in, it could spur $50 million in economic activity in the area. Now, of course, it won't.

In her Breitbart story about the withdrawal of the proposal, Debra Heine writes, "Everyone agrees the migrants streaming across the border illegally should be treated humanely and with care before they are sent back to their home countries. But the promise of a two week stay in a resort hotel is precisely the wrong message to be sending the citizens of Central America." What an incredible combination of bad facts, hilarious logic and false premises. It is not a "resort hotel." Parents in Central America are not sending their kids to the United States for two-week vacations.

And we're really not sure that "Everyone agrees the migrants streaming across the border illegally should be treated humanely and with care before they are sent back to their home countries." Conservative media hasn't been doing much to indicate, at all, that it thinks these children should be treated "humanely." Any sort of care that might make a child smile, after all, could intensify The Magnets. Perhaps there's just a different understanding of what qualifies as treating children "humanely." We'd like to think that food, a bed, medical care, legal services, and recreation -- precisely what BCFS was offering -- are the basics. Other people seems to think that if you offer these kids anything beyond a hard floor and (possibly) a roof, we've created a bunch of spoiled little prima donnas. These are not our best people.