I watched the ESPY Awards and hated it: Last night's bizarre carnival of straight maleness

ESPN's manstravganza featured Drake as emcee and Chris Brown calling himself "America's Sweetheart." No thanks! 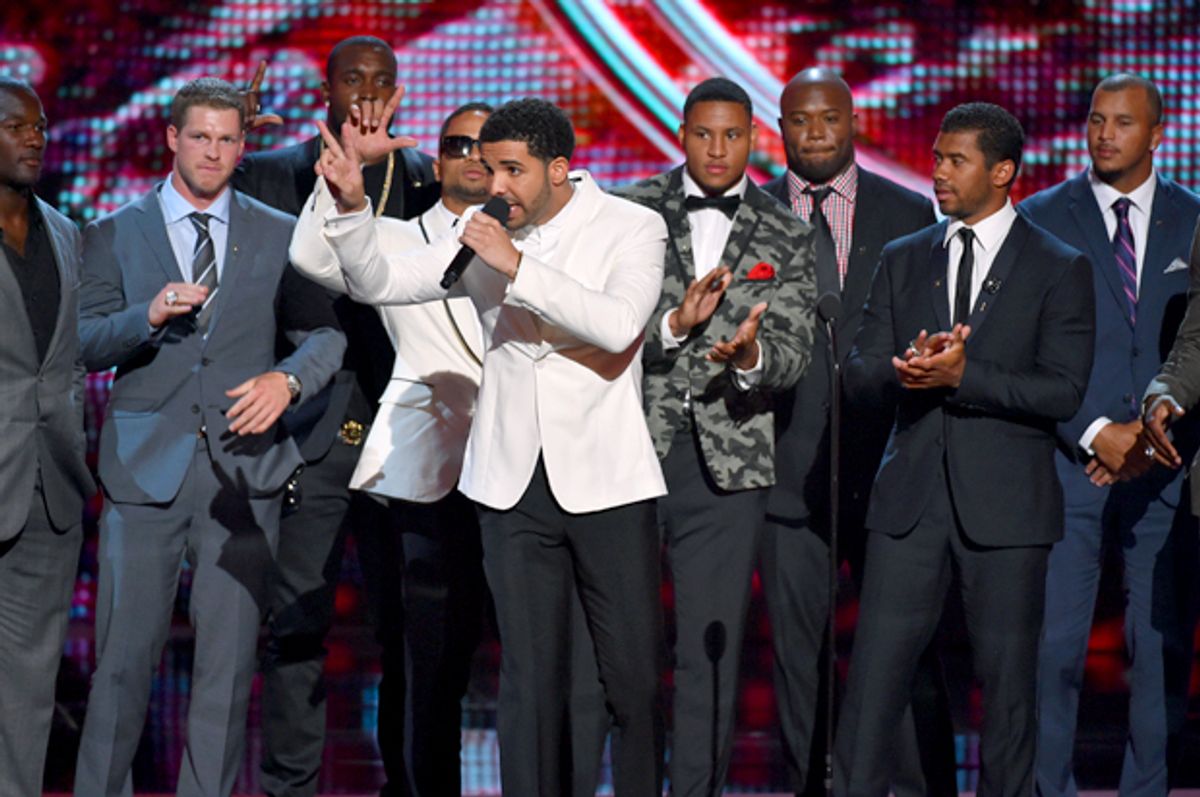 Drake, center, and the Seattle Seahawks at the ESPY Awards at the Nokia Theatre, July 16, 2014, in Los Angeles. (AP/John Shearer)
--

The ESPY Awards on ESPN, a surprisingly venerable TV institution (since 1993!), manage to narrowcast even more than the athletic events they honor. If culture is the map of the earth from space, the Espys are the blacked-out North Korea on that map -- nothing that happens there is going to get out. The ESPYs are so self-consciously a celebration of what it is to be a heterosexual man that they're impossible to parse if you don't fall squarely within that demographic.

The show's presenters last night were of two stripes: Athletes, but not ones in the very top echelon of fame, and performers who one would expect to see very specifically on the cover of Esquire. That means aging wise men like Jeff Bridges, ur-masculine sorts like Dwayne Johnson, and actresses who've been marketed on something other than their acting talents, like Jessica Alba and Jordana Brewster.  Speech-wise, it was like an Oscar ceremony where the majority of the winners are cinematographers. And the winners of awards were notably halting and shy. Two exceptions: Michael Sam and "SportsCenter" anchor Stuart Scott, both the recipients of special awards for, respectively, Sam's coming-out and Scott's struggle with cancer, delivered significantly more thought-out remarks; Sam's presentation, in particular, was laudably detailed about the player's personal history.

The host, Drake, seemed to dominate the proceedings. He may have felt like a slightly incongruous choice before the show -- he can be sharp and biting -- but he softened his edges to the degree that he'd make absolutely no one uncomfortable. He was, for a night, a super-big sports fan, using his monologue to call LeBron James "my brother, my friend, the guy I grew up with" and ask the audience to give a "patriotic American round of applause" for the U.S. soccer team. (Drake is, for the record, Canadian.) He got booed when he made an utterly innocuous joke about the name of Washington's professional football team and seemed thrown -- this is what the audience takes offense to?

Everyone, though, could agree on how hot female athletes are. Introducing Floyd Mayweather and Maria Sharapova, Drake went into farcical detail about Mayweather and then hammily noted he was with "some tennis player." And the rapper's "tribute" to WNBA player Skylar Diggins was a poem about her beauty and a request for a kiss. This, more than anything, was the show's absolute descent into a pitch only straight men can hear -- after hours' worth of awards for male athletes, the honor a female athlete gets is a man telling her how much he'd like to have sex with her. ("What do I want? I can't even say that on TV," Drake told her.) Cool!

That the night also featured a reunion between Chris Brown and Drake, who participated in a brief skit together -- two years after their fight, putatively over pop singer Rihanna, destroyed a New York nightclub -- felt like just part of the "fun." Brown called himself "America's sweetheart," a seeming reference to the legal troubles that began for him after he beat Rihanna in a car in 2009; ESPN, though, was here to help launder his image.

Other aspects of the show were utterly impassable to me: I could not figure out the "Lance Cam" at the show's beginning or what was going on with that "Frozen"/Manny Pacquiao sketch other than a Walt Disney Corporation tie-in. More than anything, though, I couldn't figure out why anyone was there aside from self-promotion. It was boring! The athletes, whose "awards" come in the form of wins and losses for their teams, seemed uncomfortable; the audience in general barely applauded for Drake; the celebrities, I suppose, just wanted to make sure the check cleared.