Yep, ordinary people gave the "Garden State" auteur lots of money. At least he used it to hire Mandy Patinkin 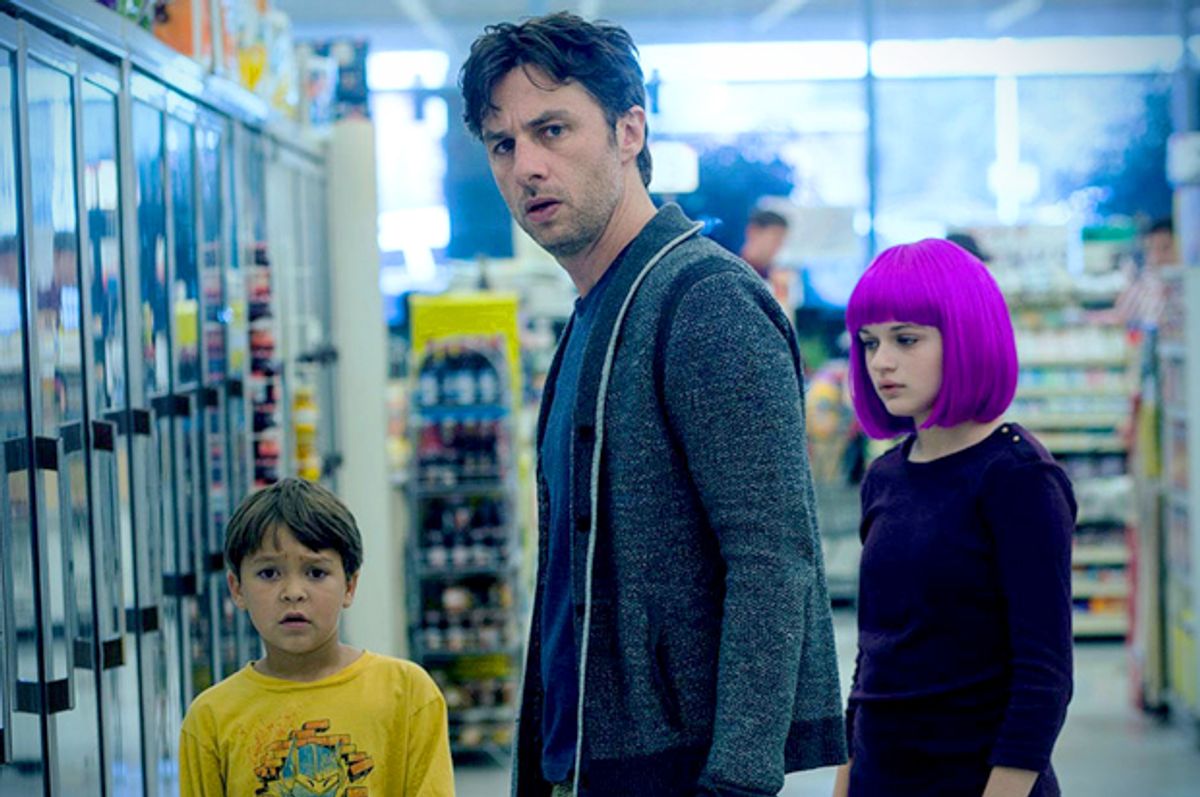 As far as I know, writer-director-producer-actor Zach Braff didn’t murder anyone or embezzle pension funds from senior citizens while making “Wish I Was Here,” the long-delayed, Kickstarter-funded follow-up to his 2004 indie hit “Garden State.” The onetime “Scrubs” star has become something of a lightning rod in the film world, but the reasons why that happened aren’t entirely his fault. A fair number of critics and other cinephile types felt insulted by the fact that Braff went to the public to fund an earnest and sentimental family dramedy that can only be distinguished from a Hollywood movie (or at least from a Harvey Weinstein movie) at the genetic or microscopic level. But that strikes me as missing the point: People who gave him money presumably did so because they wanted to see a Zach Braff movie; it’s not like they were going to fund some dark dystopian masterpiece if he hadn’t come along.

If you liked “Garden State” — or if you hated it, for that matter — you pretty much know what you’re in for with “Wish I Was Here.” (Yes, the quasi-grammatical title kind of bugs me. Doesn’t anybody use the subjunctive mood anymore?) Braff has switched coasts, but embraced his crowd-funded freedom to make exactly the movie he wants to, which is equal parts emo mixtape and post-Woody Allen Jewish domestic comedy. It is sometimes maudlin, sometimes trivial and sometimes very moving, but never less than achingly sincere. Braff’s directing isn’t going to win him the Palme d’Or anytime soon, but he’s a competent craftsman aiming his work at a midsize, middle-class audience that Hollywood largely now ignores. There’s no disgrace in that. (I am severely tempted to compare this film to Allen’s forthcoming “Magic in the Moonlight” — but I’ve sworn a blood oath not to write about that one until next week.)

Braff and Kate Hudson make a pleasant, low-impact pair as Aidan and Sarah, a married couple in a tumbledown tract house in suburban L.A. who are wrestling with a familiar litany of financial distress, parenting issues and early-midlife crisis. There’s a certain generosity at work even in their ordinariness; Braff is smart enough to understand that the movie’s real star is the tremendous Mandy Patinkin as Gabe, Aidan’s irascible, judgmental Orthodox Jewish dad, who has just learned that his cancer has returned and spread. (How and why a religious Jew named his son Aidan is not explained.) Gabe is impossible to like but equally impossible to resist. We understand why Aidan’s dysfunctional nerd brother, Noah (Josh Gad), wants nothing to do with their dad, dying or not, but Patinkin plays Gabe as a demanding, enormous, lion-hearted man who put me in mind of Dylan Thomas’ famous poem about his own father.

I can only assume that Braff has gone through the recent death of a parent in real life, because there’s no mistaking the passion and intensity of this extended portrayal, which might not have been possible even in the notional Weinstein version of this movie. “Wish I Was Here” runs a full two hours, which is definitely too long for a conventional comedy. I guess that’s the point. Unfortunately, almost everything in the movie that isn’t about Gabe feels like a sideline to the main event, and there’s a whole lot of it: Aidan’s acting career has been on the rocks since an oft-discussed dandruff commercial, Sarah’s being harassed by a creepy guy in her office, their daughter Grace (Joey King) is rebelling against her secular parents by embracing Gabe’s Orthodox faith. And there are lots of drifty, moody L.A. landscape scenes set to songs by Cat Power and Coldplay and Bon Iver and Badly Drawn Boy and so on.

Braff simply doesn’t bug me the way he evidently bugs a lot of people, in large part because his movies so obviously fill a niche: You can watch them on a plane or while vacuuming, without missing anything essential. Furthermore, his heart is self-evidently in the right place, and he doesn’t seem half as clueless or solipsistic as a lot of people in the movie business (some of whom are arguably more talented). He never tries to make Aidan seem like the coolest guy in the world, Ben Affleck-style, and his portrayal of the family’s financial problems and Sarah’s workplace predicament — her male co-workers can’t understand why she objects to a guy describing his “half-boners” to her (and speaking in a tiny little half-boner voice) — is nuanced and sympathetic. Other stuff in the movie, like Aidan’s lackadaisical approach to Judaism (he smokes a doobie in the temple parking lot) or Noah’s socks-and-sandals ComicCon existence (sex with a “furry”), is recycled and second-rate, but never mean-spirited. Given that Braff is largely a gag writer, who will build an entire scene toward a moment when an 8-year-old asks, “Can I have some poon tang?” the absence of cruelty is distinctive.

Braff gets full points for being pretty much the first mainstream filmmaker to reference the “secular home-schooling” trend without mockery, even if he knows almost nothing about it. Indeed, being a nice guy who means well ends up defining both the strengths and limitations of “Wish I Was Here” — that is both the film’s subject matter and the essential ground of its existence. It’s legitimate to observe that Braff isn’t a great dramatist, isn’t hellaciously hilarious and is treading well-worn ground. It may be legitimate to grouse about the fact that even the so-called indie audience prefers friendly, optimistic and essentially unchallenging fare like this to, I don’t know, the latest works of Nuri Bilge Ceylan and Apichatpong Weerasethakul. But it’s actually not OK to criticize Zach Braff for declaring his artistic freedom and doing it his way. Even mediocre artists are allowed to do that.

“Wish I Was Here” opens this week in New York and Los Angeles, with wider release to follow.