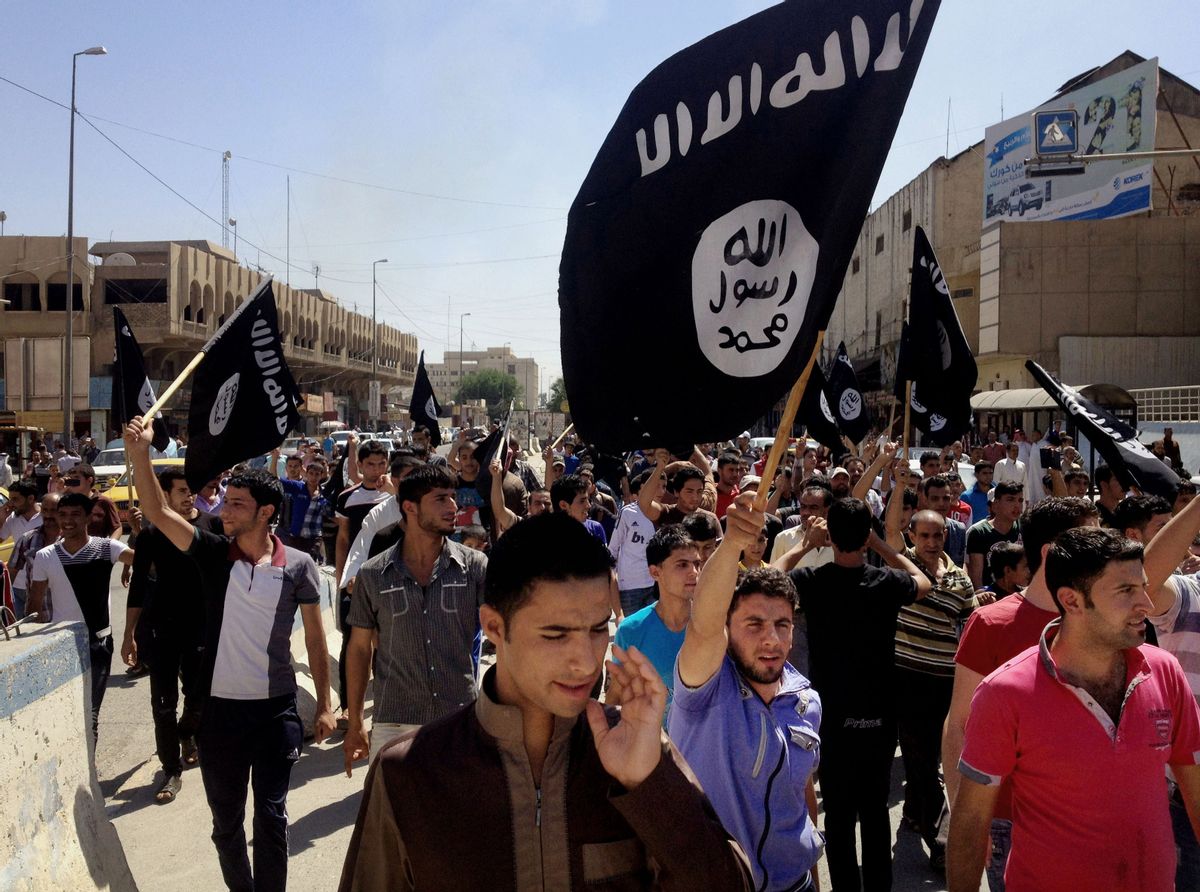 In this June 16, 2014 photo, demonstrators chant pro-Islamic State group slogans as they carry the group's flags in front of the provincial government headquarters in Mosul, 225 miles (360 kilometers) northwest of Baghdad. Flush with cash the the Islamic State fix roads, police traffic, administer courts, and have even set up an export system of smuggled crude from oil fields they control. (AP Photo, File) (AP)
--

Emergency teams, policemen and off-duty coal miners are combing a sprawling area in eastern Ukraine where Flight 17 ended up in burning pieces, killing all 298 aboard, as pro-Russian rebels say they have "most" of the airliner's recorders.

2. PLANE VICTIMS: SOME WERE EN ROUTE TO AIDS CONFERENCE

As the identity of those who perished becomes clear, an outpouring of grief follows the news that a large number of AIDS researchers and activists were on board headed to Melbourne for a 20th anniversary meeting.

3. WHAT THE CURRENT TOLL FOR ISRAEL'S GROUND OPERATION IS

Nearly 20 Palestinians and an Israeli soldier were killed in Gaza on the 11th day of the conflict as Netanyahu says the country is ready for a "significant expansion" of the offensive.

4. IN IRAQ, SYRIA, MILITANTS TRY TO GOVERN AS A STATE

Flush with cash, insurgents from the group known as the Islamic State fix roads, police traffic, and administer courts. But they also run the risk of provoking a backlash from the people they have come to rule.

The company said it would shift future product designs to its Lumia line of Windows phones.

6. WHO EXPANDS INFLUENCE IN U.S. BACKYARD

During overlapping visits to Latin America, the leaders of China and Russia have been welcomed with open arms by governments that are among the most hostile to Washington.

The former intelligence analyst who leaked secret documents has been diagnosed with gender dysphoria, the sense of being a woman in a man's body.

8. GETTING BAKED. AND PICKLED. AND CANDIED

Beyond the more mundane pot brownies, the proliferation of marijuana edibles for both medical and recreational purposes is giving rise to a cottage industry of baked goods, candies, infused oils and cookbooks.

One way to celebrate is to follow on Twitter as the Smithsonian recreates — in 140 characters or less per tweet — the eight-day Apollo flight that took place 45 years ago.

Six times in his last eight tournaments, Rory McIlroy has played poorly each Friday, robbing him of a chance to win.