Can your employer punish you for bathroom breaks?

A labor dispute goes down the drain 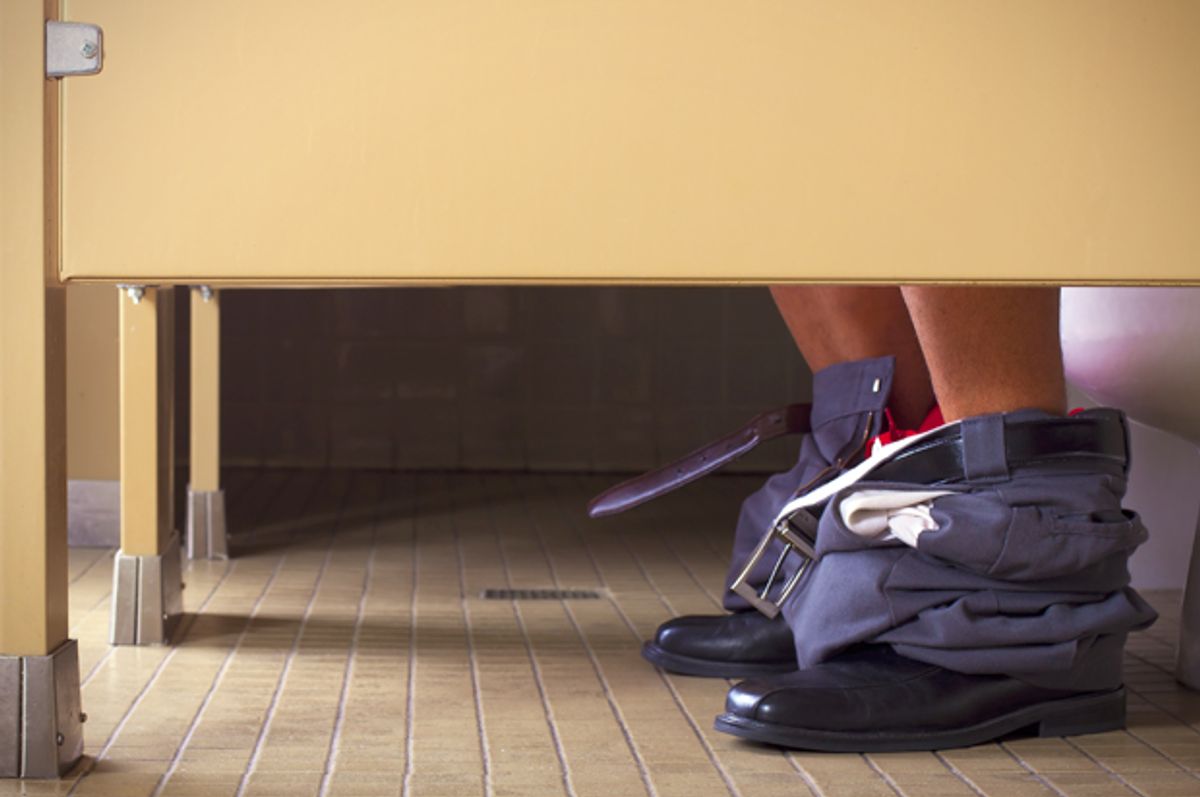 You'd expect a company called the WaterSaver Faucet Co. to care about what happens in the bathroom. But you wouldn't expect this. In one of the most absurd, enraging disputes in recent labor news, unionized employees of Chicago's WaterSaver Faucet Co. protested earlier this month for a new contract -- and for an end to the company's reputed new draconian policy on bathroom breaks.

As ProgressIllinois reported last week, workers are asking for a minimum wage of at least $15 an hour and for paid sick days. Teamsters Local 743 senior union representative and staff attorney Nicholas Kreitman says that workers are also protesting the company's sick leave and disciplinary policy. "People here are basically harassed if every time they take a sick day," he says. "They get a point… and after a certain number of points they're let go. That includes any kind of walking in two minutes late -- you get a point or half point."

But most mind-bogglingly of all, workers say that in response to the union's latest negotiations, the company issued a new bathroom break policy -- replete with a swipe card system located off the factory floor to monitor restroom use. Rudy Dixon, a 33-year veteran of WaterSaver, says, "Right now, you've got to write in and write out to go the bathroom. Then when you go to the bathroom, you've got to punch in and you've got to punch out. That's not right. You can only use the bathroom twice a day." CBS News notes that "The average person urinates at least 8 times each day," and for people with a variety of medical conditions it's even more. Going to the bathroom less often can be a sign of dehydration, and holding it in can lead to health problems including urinary tract infections. It can also lead to a condition known as "This is BS-itis."

Kreitman claims that since implementing the policy the company has written up one third of its workers for "excessive bathroom use," but WaterSaver CEO Steve Kersten says that 120 work hours were lost in May due to "bathroom visits outside of allotted break times." In an affidavit, the company's own human resources department has described the "excessive use of the bathroom as... 60 minutes or more over the last 10 working days" -- or, if you're counting, six minutes a day. Kersten asserts that workers have "unlimited access to bathrooms without the electronic systems" during their one hour of allotted break time per day, but that "Our supposition is that some of the behavior is related to cell phones and texting... although I have no hard evidence." What? No camera in the restrooms to check up on that? I see a wasted opportunity for efficiency monitoring. Those 60 minutes of daily break time, by the way, include lunch and "a 5-minute clean-up period at the end of the day." Nick Kreitman says, "The company has spreadsheets on every union employee on how long they were in the bathroom. There have been meetings with workers and human resources where the workers had to explain what they were doing in the bathroom."

It gets even more like a Terry Gilliam film from there. The company argues that it had "little choice" but to institute the policy after workers were spending too much time in the toilets, but CNN notes "It also implemented a rewards system where workers can earn a gift card of up to $20 each month ($1 a day) if they don't use the bathroom at all during work time." Think of it – just don't perform your natural body functions for half your waking hours and you too can earn a whole dollar! In gift card form! I can't tell which is more infantilizing and degrading – punishing people for using the bathroom or rewarding them for not. I do know that the last time most of us got that much attention for our elimination habits we were toilet training. If you're looking for tips, employers, as a mother, I can say that some kind of smiley-faced sticker system by the toilet has been known to work wonders as a motivating device.

Sadly, this is not an isolated case. Last year, the LA Times reported how Unified Grocers warehouse in Santa Fe Springs had begun tracking how long it does – and how long the company thinks it should – take a worker to navigate through the warehouse, while a nurse at a local hospital wears a badge with a tracking device. Other companies similarly monitor worker phone use and bathroom time.

All of this monitoring may perhaps speed up productivity – with the ultimate end of weeding out those workers whose bladders and bowels are the most troublesome – but it certainly doesn't automatically correlate into how well someone does the job he or she is really being paid to do. Here's a very simple fact – how often you pee is not a reflection of how well you work. More significantly, when companies treat their workers with suspicion and mistrust – even whey admit they have "no hard evidence" of abuse of their time – it violates their privacy and creates a toxic culture. And there's a better way to be a water saver than trying to control your staff's bodily functions.