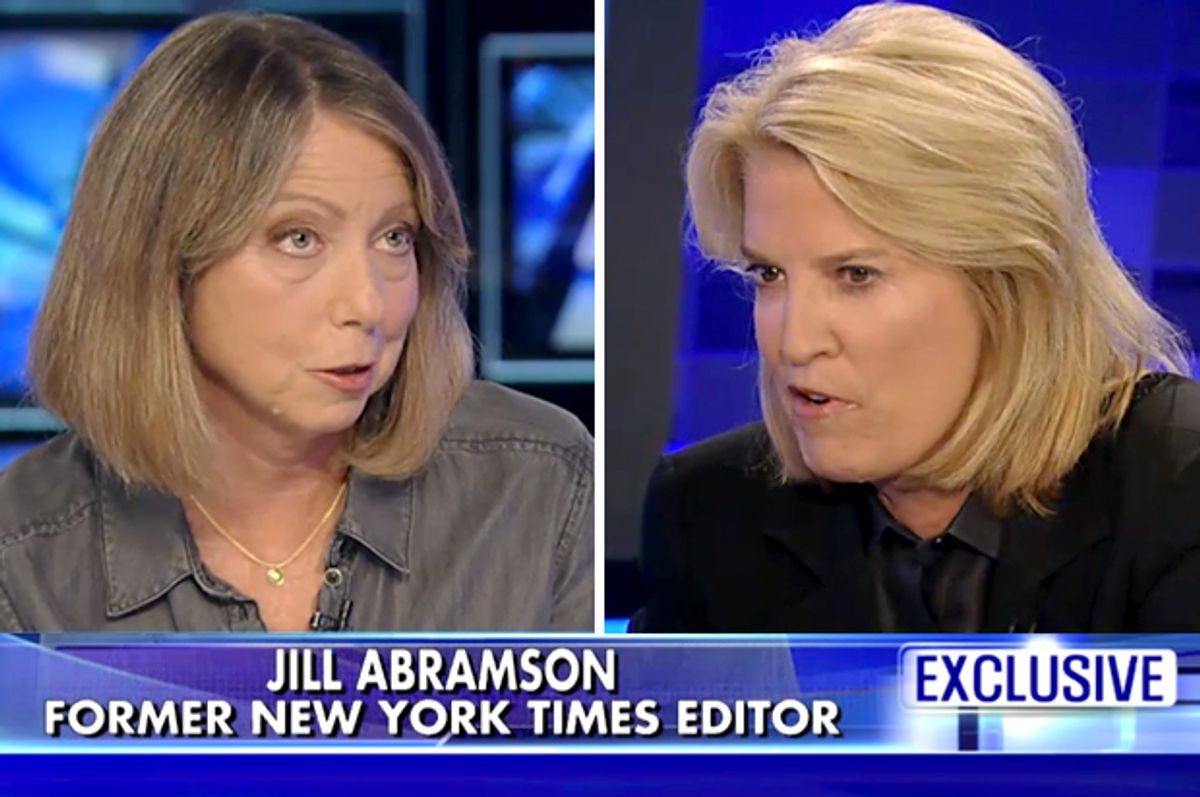 After her spectacular high-profile ousting as executive editor of the Times in May, Jill Abramson broke her post-NYT silence this week with a series of media appearances. First it was announced that she’d be opening up first to Katie Couric on Thursday; then Greta Van Susteren swooped in and scooped Couric with a Wednesday interview. Abramson struck an appropriately unrepentant pose as she made the rounds, telling young women not to “feel stigmatized” after losing a job.

"I was fired,” she told Greta Van Susteren flatly. “I’ve devoted my whole career to truth-telling, so why hide that?” The appearance on Fox News’ "On the Record" was sandwiched between an interview in Cosmopolitan and another online with Katie Couric for Yahoo News. In her interviews with both Van Susteren and Couric, she was on a clear mission to work the popular gendered media angle. Each successive appearance revealed a sharp and knowledgeable Abramson who pulled no punches. But with Van Susteren, she probably revealed more about our media environment—and the state of women in media—than anyone expected.

The Van Susteren interview, as awkwardly posed as it was to, ah, attack President Obama, was more pointed than Couric's. (The Obama dig might make more sense in light of the strongly worded support for Hillary in 2016 in Abramson's Cosmo interview.) With Van Susteren she seemed to be engaged in semi-debate with a savvy, politically engaged peer. Couric’s questions were hesitant and clumsy—particularly when reading from a screen about whether or not there was a gender bias in media, which is a question she should probably be familiar enough with to not have to read from a screen. Some responses seemed to test Couric’s smiley, straight-faced composure. For example, on the subject of her conversations with higher-ups about compensation, Couric asked for clarification, the walls came up. “I’m not gonna talk about my pay,” Abramson said and paused before adding, “On your show.”

If there were a person in the universe most capable of effectively criticizing the Times right now, it might be its ousted executive editor. But Abramson is not one to question whether the Times' armor has chinks. She still claims to view the Times as unassailable. (And professes to reading it, cover to cover, every day. Also, has a "T" tattoo. ) To Couric, Abramson even expressed a desire to make sure the public remains focused on “the issue” and not her firing: The issue being: is the Times still putting out quality content?

But this casting of “the issue” obscures what seems like the real issue here: the paper's handling of news reported by, edited by, or experienced by women. And the Van Susteren interview did a better job of making it clear that the gender issues at stake here are unavoidable--even when gender isn't being directly discussed.

In Cosmo, Abramson notes that she was the first to hire enough women to top editorial positions to give the masthead a 50-50 split. She also knows that this solution wasn’t permanent: “A couple of times I had to explain [it] to men. I think there was some surprise at the speed at which some women got promoted,” she says.

But she and Van Susteren also had a conversation that was far more wide-ranging. “Before I was fired, I spoke every day to the national security team in Washington,” Abramson explained to Van Susteren, describing the difficult environment journalists—her journalists, so well paid, well-placed, well-connected, well-off journalists— face trying to report facts in this day and age. “I never felt, either with this administration or the Bush administration before it, when a top official would call me and express concern that a story would jeopardize national security, I never felt that was a dishonest request, or a disingenuous request. It always caused me to pause, hear the argument, think it through,” she told Van Susteren. (Who, for her part, was delighted: this means Obama is bad.)

The Fox reporter, though, wasn't so interested in Abramson's nuanced take on media submission to government: she wanted blood. When she tasked Abramson to answer for the oft-repeated assertion that the New York Times is a hotbed of liberalism, Abramson scoffed. “The Times is a cosmopolitan newspaper,” she answered. “There are many times where that characterization [of the paper as liberal bias] is dead wrong.” When Van Susteren was skeptical, Abramson invoked their personal relationship: "You’ve known me a long time," she added, "and I’m telling you it’s true."