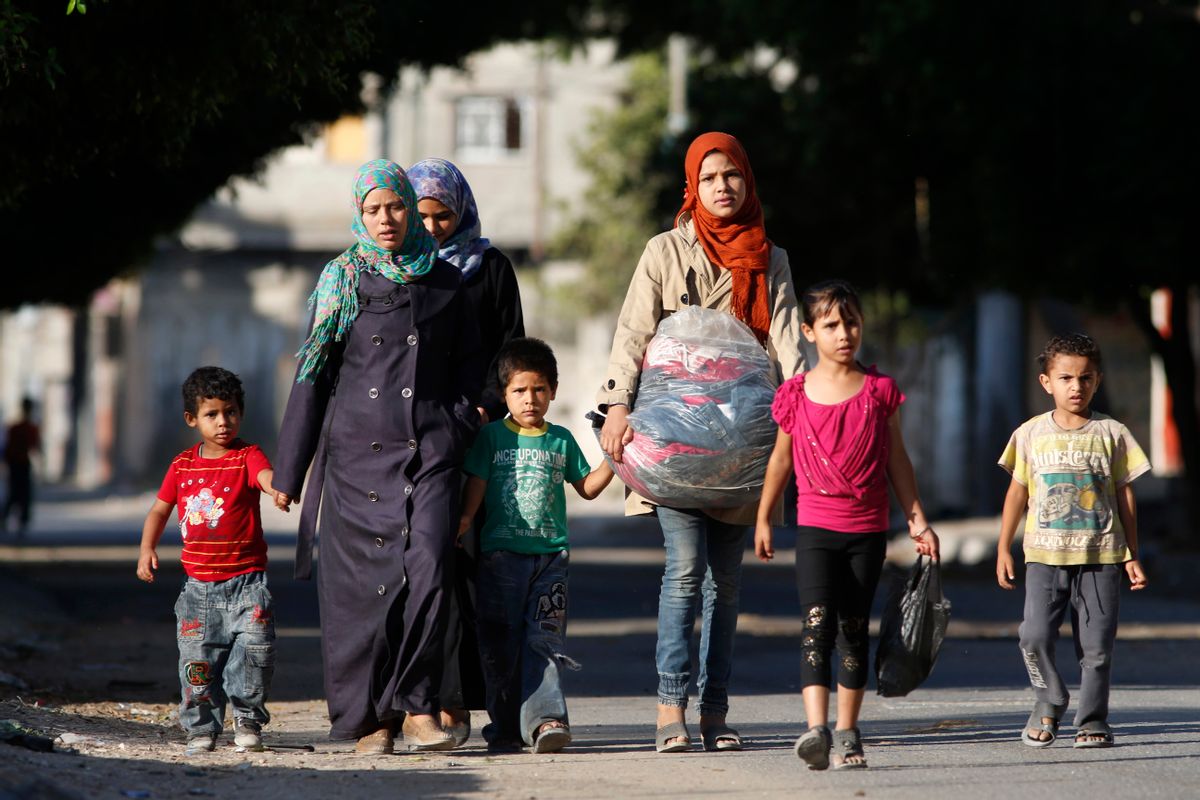 Palestinians flee their homes in the Zeitoun neighbourhood of Gaza City, after Israel had airdropped leaflets warning people to leave the area, Wednesday, July 16, 2014. (AP/Lefteris Pitarakis)
--

How commonly is the alleged moral superiority of the Israeli military invoked? So commonly that if you type "the most moral army in the world" into Google, you'll immediately get a bunch of articles discussing the Israeli "Defense" Forces. Just last week, Slate’s William Saletan argued that while Hamas fires rockets at civilians, Israel takes "pains" in its “exemplary” efforts to avoid harming Palestinian civilians. The New York Times’ Steven Erlanger didn’t “argue” that Israel takes major precautions to avoid harming civilians, he seemed to be taking it as a given when he wrote Gazans were anxious about airstrikes “no matter how carefully Israel tries to target them.”

Despite the fact that the Palestinians are an occupied, besieged and oppressed population that lacks the capability to defend itself against systemic and daily Israeli violence, Hamas’s insistence that Israeli civilians are legitimate targets is morally indefensible, and should be condemned by all people of conscience. But according to what evidence is Israel’s conduct better? And how can it possibly be better when Israel has advanced surveillance capability and laser-guided weaponry, but has still managed to kill more than 150 Palestinian civilians (including 40+ children) in Gaza, compared to just one Israeli death in this latest round of violence? Instead of taking Israel at its word, let’s look at the take of credible observers.

After conducting an investigation, Human Rights Watch (HRW) issued a report on Wednesday accusing Israel of carrying out “unlawful” strikes in Gaza, ones that “either did not attack a legitimate military target or attacked despite the likelihood of civilian casualties being disproportionate to the military gain.” It noted that “Such attacks committed deliberately or recklessly constitute war crimes.” HRW Middle East Director Sarah Leah Whitson also added that Israel’s actions raise “serious questions as to whether these attacks are intended to target civilians or wantonly destroy civilian property.”

The report also said that “Human Rights Watch has documented numerous serious violations of the laws of war by Israeli forces in the past decade, particularly indiscriminate attacks on civilians,” and criticized Israel’s preposterously inadequate efforts at “warning” civilians of impending strikes. Now, which part of all that fits with “exemplary” efforts at avoiding killing civilians? Still, some may buy into Israel’s allegation that Hamas’s use of human shields is what’s responsible for the high civilian death toll. Let’s look at the evidence.

While human rights organizations haven’t yet addressed “human shields” allegations in the ongoing round of Israel-Gaza violence, they did after the 2009 round when Israel killed at least 773 Palestinian civilians, compared to three Israeli civilian casualties (a ratio of 257:1), and used the same “human shields” argument to deflect responsibility for those deaths. When the dust settled, Amnesty International investigated the matter and concluded that there was “no evidence that [Palestinian] rockets were launched from residential houses or buildings while civilians were in these buildings.” More attention-worthy was the report’s note that,

in the cases of [Israeli] precision missiles or tank shells which killed [Palestinian] civilians in their homes, no fighters were present in the houses that were struck and Amnesty International delegates found no indication that there had been any armed confrontations or other military activity in the immediate vicinity at the time of the attack.

Israel’s Use of Human Shields

By contrast, the same report found that “in several cases Israeli soldiers also used [Palestinian] civilians, including children, as ‘human shields’.” Going back in time just a little further to put this into context is important: when the Israeli Supreme Court ruled in 2005 that the Israeli military had to stop using Palestinian civilians as human shields, the Israeli “defense” establishment objected to the ruling. The appeal against the ruling failed, and the practice remains technically illegal, but Israel implicitly encourages it to continue by offering an “inadequate … slap on the wrist,” as Human Rights Watch put it, to Israeli soldiers caught using this reprehensible tactic.

This reveals two important things: the first is the moral hypocrisy and chutzpah on display when Israel ignores its own use of human shields as it accuses its enemies of using them. The second is Israel’s self-contradicting logic: If Palestinian militants had such disregard for Palestinian civilian lives, why was the Israeli military so invested in maintaining the ability to use Palestinians as shields? The fact that the Israeli army wants to use Palestinian human shields actually proves that they believe Palestinian militants prefer not to endanger their own civilians.

When Intentions Are Clearer

There may be more discipline among Israeli leaders in how they talk about the war on Gaza this time, but that wasn’t the case in previous conflagrations. In the 2012 assault, Israeli Interior Minister Eli Yishai said the "goal of the operation is to send Gaza back to the Middle Ages." Gilad Sharon, son of former Israeli prime minister Ariel Sharon, said "we need to flatten entire neighborhoods in Gaza. Flatten all of Gaza." And if you think that’s just rhetoric, consider that Amnesty International previously documented Israel had "flattened ... busy neighborhoods" into "moonscapes."

And it wasn't just human rights organizations that were exposing Israeli war crimes in Gaza, but Israeli soldiers whose conscience could not bear to remain silent about the atrocities they had committed were also coming forward. And in the 2006 assault on Lebanon, one Israeli commander referred to the dropping of more than a million cluster bomblets over Lebanon like this: “What we did was insane and monstrous, we covered entire towns in cluster bombs.” Is this the most moral army?

Imbalance of Power Shapes the Conflict

While the 2009 Amnesty International report found no evidence that Hamas used human shields, it did acknowledge the obvious reality that Hamas does operate in (and fire rockets from) residential areas, adding “although this would be difficult to avoid in the small and overcrowded Gaza Strip.” Beyond the size and overcrowding of Gaza, Hamas also has no real army which could confront Israel on a traditional battlefield. As Yousef Munayyer recently argued on MSNBC, “Palestinians would certainly prefer to have precision-guided missiles and F-16s, and the kind of defense establishment that an independent, sovereign state would have to defend itself.” But in the absence of such capabilities, any fighting militia would be forced to use guerilla tactics that involve operating in inhabited areas.

As Andrew Sullivan put it,

Yes, they conceal armaments and rockets and weapons in civilian areas — and that undoubtedly increases civilian deaths. But what alternative do they have exactly, if they wish to have any military capacity at all? Should they build clearly demarcated camps and barracks and munitions stores, where the IDF could just destroy them at will?

Violence against civilians does not suddenly become more legitimate just because it is carried out by a state actor, and one that doesn’t fit our biases and preconceptions of who commits terrorism. And leading human rights organizations get that, which is why they call for ending military support not just for Hamas and other militant groups, but also for Israel.

Israel’s ground incursion in Gaza is now underway, and while it will almost certainly cause more casualties and destruction, it won’t contribute to resolving the conflict in the long term. Ultimately, this conflict will only be solved when the side holding virtually all the power, the one imposing displacement, occupation, and apartheid on the other side, is pressured in a meaningful way to allow Palestinians to exercise self-determination. Heeding the calls for a suspension of military aid to Israel would be the beginning of such meaningful pressure, and through it we could hopefully see a process that puts us closer to the ending the needless killing of innocent Israelis and Palestinians.