"You gotta deal with it!": The TV writers behind the powerful female character no one is talking about

"The Legend of Korra" may be a cartoon, but its female protagonist is one of the toughest, most complex on TV 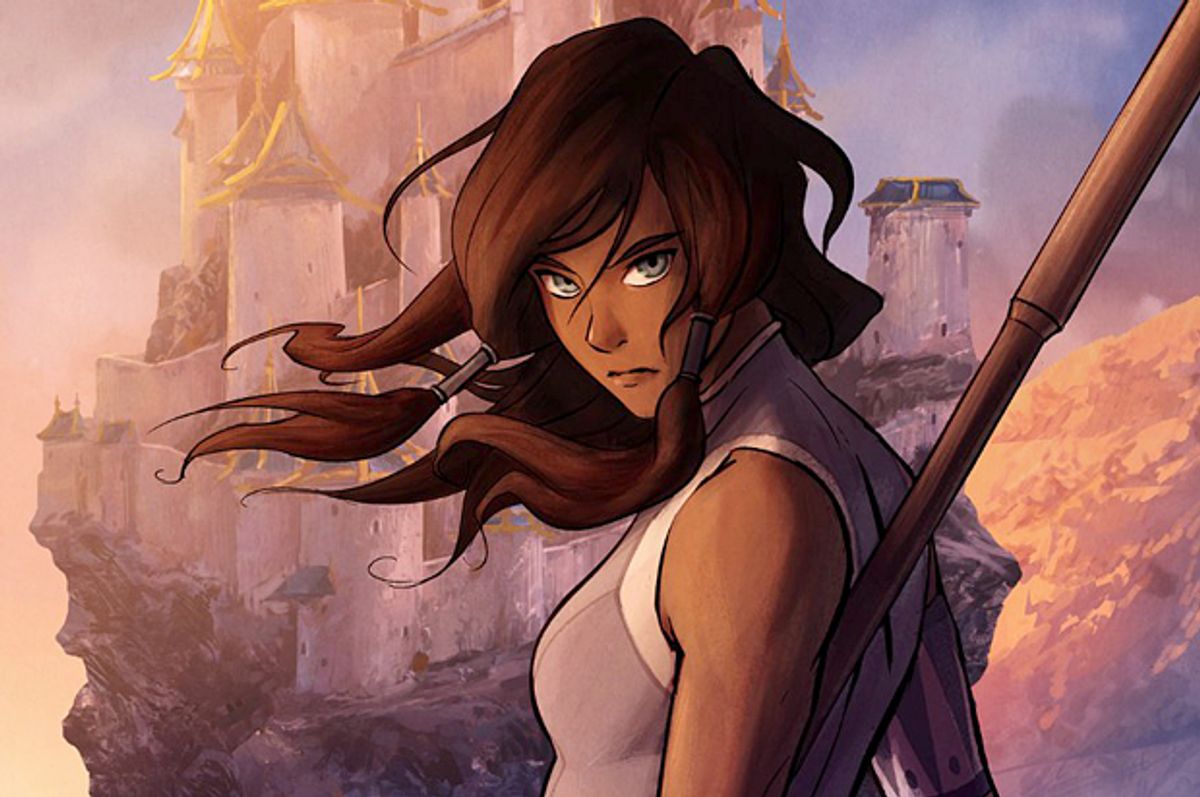 "I'm the Avatar and you gotta deal with it!" the toddling superheroine Korra, still in diapers, blasts in the very first episode of Nickelodeon's surprisingly intelligent cartoon "The Legend of Korra."

Like Aang from "Avatar: The Last Airbender," The Legend of Korra's transformative prequel series, the athletic, stubborn Korra is an elemental demigod who can harness, or "bend," the energies of earth, air, water and fire to bring her planet's warring natural and human worlds into balance. (Sometimes whether they like it or not.) As such, the singular Korra, voiced by Janet Varney, also may be one of the toughest female characters currently on TV.

"I am certainly proud to add Korra to the pantheon of TV characters, which is perpetually sorely lacking in multifaceted female characters who aren't sidekicks, subordinates or mere trophies for male characters," writer Bryan Konietzko said in an interview.

In a TV landscape filled with banal horrorcore that airs our darkest destructive impulses rather than our brightest aspirations, "The Legend of Korra" lastingly and accessibly critiques power, gender, extinction, spirit and more — all wrapped up in a kinetic 'toon as lyrical and expansive as anything dreamt up by Hayao Miyazaki or George Lucas, on a network known mostly for its so-called children's programming, in a format once considered too infantile for minds of consequence.

Older and more mature than the still fiercely smart "Avatar: The Last Airbender," "The Legend of Korra" is a surreal, lovely sequel. Salon spoke to co-creators Konietzko and Michael Dante DiMartino about the critical bias against animation, the hyperviolent escapism of "Game of Thrones" and why Korra appeals to adults as well as kids.

Do you think a bias against animation still exists? Or have we grown up enough to admit it can compete against non-animated TV?

DiMartino: I do think there is probably a too-low expectation of what a children's TV animation program can look like, and the types of stories it can tell. We're constantly trying to push the envelope with the sophistication and depth of both the storytelling and artwork in Korra. My hope is that people who love interesting stories and entertaining TV programs will check out the show, whether they normally watch animation or not. We've heard many times over the years that "Avatar: The Last Airbender" and "The Legend of Korra" have converted even the most skeptical of viewers.

I actually think Korra may be the most powerful female character on television. And I'm not just talking about her peerless superpowers, but also her cultural power as a positive, complex heroine.

Konietzko: Although I like the sentiments, it's difficult from this vantage to quantify Korra's cultural power, especially since the audience has only seen half of her story so far. The impact of our first series seemed to grow bigger in the years after it was finished, due to reruns and digital streaming, and it still keeps finding new audiences every year.

I am certainly proud to add Korra to the pantheon of TV characters, which is perpetually sorely lacking in multifaceted female characters who aren't sidekicks, subordinates or mere trophies for male characters. The notion that she is the most potent female character you can think of, and no other comes to mind, in a time when I hear there are more TV shows in production than ever before, is pretty depressing. Hopefully, Korra and our many other dynamic female characters, including the new ones we will be introducing in Books Three and Four, will help inspire kids and adults alike, open doors for more main female characters in all media.

Horrorcore, or at least hyperviolent escapism, dominates on TV, from "The Walking Dead" to "Game of Thrones."

DiMartino: I do enjoy "Game of Thrones," though "Walking Dead" is too scary for me! I'm not interested in horror or escapist violence at all. I'm not going to pretend I don't watch some violent shows, "Game of Thrones" among them, but I have been finding myself as of late questioning why I'm watching some of these more extreme offerings. For me, as long as there is some kind of point to it all, and it isn't mere escapism, then it keeps me coming back for the next episode.

Should we, like J.R.R. Tolkien, a World War I vet who witnessed the horrors of the Somme, spend more time trying to re-enchant instead of disenchant? To me, that's what "Korra" does.

DiMartino: I totally agree that today's stories have a great opportunity, and responsibility, to help us evolve as individuals and as a society. I'm fascinated by some of the neuroscience research that's being done on how stories affect our brains. The studies are pretty young right now, but there is some evidence showing that we are what we watch, or read. Stories really can have a positive or negative influence on the brain and our thoughts. Through Korra's character, we're trying to show a change as she evolves from an aggressive person into a more enlightened being. Hopefully, she will inspire some viewers to follow their own path of self-improvement.

"The Legend of Korra"'s first two apocalyptic seasons intelligently critiqued the uses and abuses of power. And its new comic book even has a rogue refinery! How does your show reflect the concerns — geopolitical, environmental, etc.—of our own era?

Konietzko: We have a lot to say about that, especially in Book Four, so I will have to stay mum on that for now. But you can always be sure in our stories that we rarely present anything as a one-sided issue. It seems to me virtually any ideology, no matter how intrinsically benign, can be used to oppress. And any group with power, no matter how well-meaning, ultimately corrupts and ends up exploiting its advantage to some extent. Mike and I are interested in examining how different characters act on various sides of these issues. We have always put the quest for balance at the center of our storytelling, whether it is the struggle to find it within one character, between a character and society, between disparate cultures or between humans and their environment.

DiMartino: One of the biggest questions running through "The Legend of Korra," and to some extent "Avatar: The Last Airbender," is how do you balance humanity and modern technology with nature, spirituality and tradition? I try to do it in my life every day. It's not easy. Technology definitely has a seductive lure and it's easy to get sucked in. And at the same time, I love to be out in nature, away from all that. Is the solution to totally unplug and live off the grid? Maybe on an individual level, but it's impossible on a global scale at this point.

"Korra" is a foundational postmodern mythology that manages to appeal to adults as well as kids. Is that hard to do?

Konietzko: For making these types of shows for the "four quadrant" demographic, our not-so-secret recipe has always been to make sure the show is something we would like to watch, something worth all the time and energy it takes to make it. Luckily, Nickelodeon has given us a great platform to do that, and people all over the world have connected with it. We try not to water down the content. When I watch a show, I want to feel like it is coming out of someone's head, not out of a boardroom.

Finally, is this the end for "Korra"?

Konietzko: "The Legend of Korra" will wrap with the finale of Book Four. Just like Aang's journey came to a close in "Avatar: The Last Airbender," Korra's arc will reach its conclusion then. One of the things that make these two series so potent is that they are designed to end. TV series get stale when their main objective is to run indefinitely, which just results in watering down the plot and drawing out the character arcs too long. Korra is here now, she'll kick your butt and then she's moving on with her life. Deal with it!