Al Gore is the single-issue candidate we need

Maybe he wouldn't win, but Al Gore could still make climate change one of the biggest stories of 2016 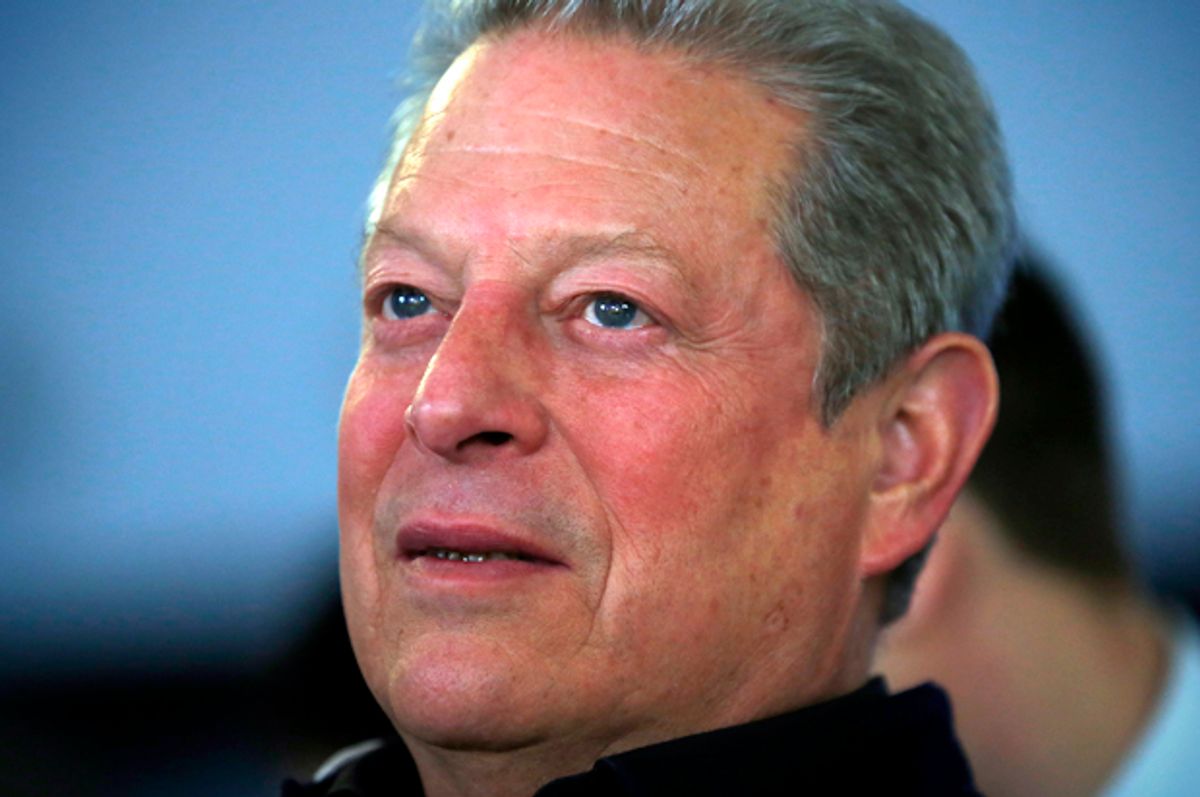 With Republican pundits speculating on the possibility of a third Mitt Romney bid for the White House, I think it’s appropriate to mention another two-time presidential candidate whose moment has come in 2016 — Al Gore.

Allow me to explain.

I have never met Gore, nor am I connected with anyone who has a professional interest in seeing a renaissance for Gore’s political career. Similarly, I am not writing this article in my capacities as a political columnist, graduate student or local Pennsylvania politician, but as a concerned citizen — not only of the United States, but of the world. Like President Obama, who made news this week by pointing out that the climate change crisis threatens every aspect of America’s future, I want to make sure my children will grow up in a strong country, one that is safe and secure on a healthy planet. And America needs Al Gore to make a bid for the White House because of his unique credibility on anthropogenic global warming.

As the EPA explains on their website, a failure to reduce greenhouse gases in our atmosphere will have a devastating effect on “our food supply, water resources, infrastructure, ecosystems, and even our own health.” In addition, as former Navy Rear Admiral David Titley explained in a recent Op-Ed to the Pittsburgh Post-Gazette, the confluence of violently unpredictable changes in our weather patterns and drastic reduction in vital resources will destabilize the international political scene, as the countries that stand to gain or lose the most from climate change will be compelled to overhaul their economic and foreign policies accordingly. As Titley somberly put it, “Climate change is an accelerating threat to national security.”

Yet even though a recent survey of more than 12,000 peer-reviewed climate science papers found that 97 percent of climate scientists agree that global warming is man-made, a CBS News poll last May found that only 49 percent of Americans accept that climate change has been caused by human activity, with 33 percent attributing it mainly to natural patterns, 11 percent claiming it doesn’t exist, and 6 percent either saying that they don’t know or that it is caused by both. Moreover, climate change has long struggled to be taken seriously as a major national priority, a problem reinforced last month when a Bloomberg National Poll found only 5 percent of Americans ranked it as the most important issue facing the country today (placing it seventh).

The good news is that, as Berkeley psychology professor Michael Ranney demonstrated in a 2012 study, people can change their minds when the dynamics of climate change are broken down for them in a straightforward and easily digestible manner. To quote snippets of the 400-word explanation that Ranney found was most persuasive:

Since the industrial age began around the year 1750, atmospheric carbon dioxide has increased by 40% and methane has increased by 150%. Such increases cause extra infrared light absorption, further heating Earth above its typical temperature range (even as energy from the sun stays basically the same). In other words, energy that gets to Earth has an even harder time leaving it, causing Earth’s average temperature to increase – producing global climate change…

(a) Earth absorbs most of the sunlight it receives; (b) Earth then emits the absorbed light’s energy as infrared light; (c) greenhouse gases absorb a lot of the infrared light before it can leave our atmosphere; (d) being absorbed slows the rate at which energy escapes to space; and (e) the slower passage of energy heats up the atmosphere, water, and ground.

Unfortunately, the simple science has been obscured in our political debate. While special interest groups can make some headway by lobbying, no weapon comes remotely close to the potency of a high-profile presidential campaign when it comes to mobilizing large sections of the population and transforming public opinion. Even an Academy Award-winning movie that became part of our pop culture zeitgeist — I’m referring, of course, to Gore’s iconic documentary "An Inconvenient Truth" — had a limited effect because it was viewed as the pet project of a supporting character in the ongoing American story. For better or worse, we live in a society that is over-saturated with issues and advocates; as a result, anyone who is not an active main character on today’s political stage quickly finds his or her cause lost in the noise or, at best, championed only by a static niche of activists and casual policy junkies. The people running for president, however — and in particular someone like Gore, who has the unique distinction of having won the popular vote in a general election, even if he lost the war — are never just supporting characters.

This brings me to the critical detail of a hypothetical Gore candidacy: It would have to be a single-issue campaign. In part this is a fail-safe measure; while a strong case can be made that Gore would make an excellent president (a premise with which a plurality of American voters agreed in 2000), the primary objective would not be to promote Gore the man, but to guarantee due attention is paid to the threat of climate change. While other campaigns on both sides would continue the practice of focusing on several issues in the name of advancing a name brand (i.e., the individual candidate), Gore would have the advantage of representing not his own cause, but the cause of creating an environmentally sustainable future. Indeed, he wouldn’t have to actually win in the primaries to achieve his goal. As long as he consistently received a large enough percentage of the primary vote to be considered a “major player,” he would (a) keep climate change in the national headlines; and (b) force the other candidates to prioritize climate change in the hope of winning over his supporters.

I don't want to oversell what a Gore candidacy can accomplish to save our planet. Obviously it would be a game-changer if he were elected, but should the Democrats instead nominate, say, Hillary Clinton or Joe Biden, Gore could force them to take a hardline stand on the issue. Even though most Democrats agree that global warming needs to be addressed, it is usually prioritized below other matters like the economy or foreign policy. This is no doubt because it is viewed as a distant threat rather than an immediate one — a perspective that may be the luxury of baby boomers, but, alas, not for the millennials who will inherit the ecological disaster they leave behind.

Gore's goal should be to force them to commit to a proactive and emphatic position on this matter, making the fight against climate change one of their top priorities, similar to what Ross Perot did for both parties on balancing the budget in 1992; Eugene McCarthy did for Democrats to mobilize opposition to the Vietnam War in 1968; or President John Tyler did to pressure the (still Jacksonian) Democrats to nominate a candidate who would annex Texas in 1844.

Although there have been plenty of single-issue candidates in the past, few have had Gore’s eminence or name recognition. As such, this approach — if executed correctly, especially from a PR standpoint — could come across as refreshingly novel, helping Gore stand out from the pack. This is where the argument that Gore has a civic duty to run comes into play: If he truly believes that we are running out of time to effectively address man-made climate change, then he must appreciate the importance of elevating the issue in our national debate.

While most people associate Gore with the tragedy of the 2000 presidential election, his greatest political campaign occurred more than a decade earlier, when he ran against the likes of Michael Dukakis, Dick Gephardt, Paul Simon and Jesse Jackson for the 1988 Democratic presidential nomination. Aside from Jackson, Gore was the only Democratic candidate in that race who associated himself with a clear cause, not only calling attention to the urgency of addressing global warming but striving to make it one of the central issues of the election — to no avail. As he later recalled, “I made hundreds of speeches about the greenhouse effect, the ozone problem, that were almost never reported at all. There were several occasions where I prepared the ground in advance, released advanced texts, chose the place for the speech with symbolic care — and then nothing, nothing.”

Thanks in no small part to Gore’s own efforts, public awareness of this important issue has dramatically increased in the twenty-six years since that first campaign. While Gore would have probably had a better chance of beating George H. W. Bush than any of the other Democratic aspirants (his reputation as a Southern centrist made him the least vulnerable to the Bush team’s dirty tactics, which were ultimately successful against Dukakis, the eventual nominee), he simply lacked the fame and clout to force global warming onto the national radar. Today he is a former vice president, a Nobel Prize and Academy Award-winner and an elder statesman; his name and reputation alone will make him a major contender as soon as he announces his candidacy (something true of no other Democrat in 2016 except for Clinton).

I know that I am asking a lot of him. Of the four Americans who were denied the presidency despite winning the popular vote, he is one of only two to have never made another bid for the White House (Andrew Jackson and Grover Cleveland both ran again — and, it’s worth noting, won). The other one, Samuel Tilden, was satisfied knowing that he would famously “receive from posterity the credit of having been elected to the highest position in the gift of the people, without any of the cares and responsibilities of the office.” While only Gore knows for certain why he has retired from electoral politics, I would imagine Tilden’s reasoning at least factors into Gore’s rationalization of his decision … to say nothing of his legacy in history.

Under normal circumstances, I would agree. As Gore knows better than anyone else, however, we are running out of time to address global warming, and no weapon would be as effective in fighting it as a Gore presidential candidacy. If ever a man and a moment have met, Gore is that man and the 2016 presidential election is his moment.