Conventional wisdom says the GOP congressman is a failure. But the latest IRS news reveals his true motives 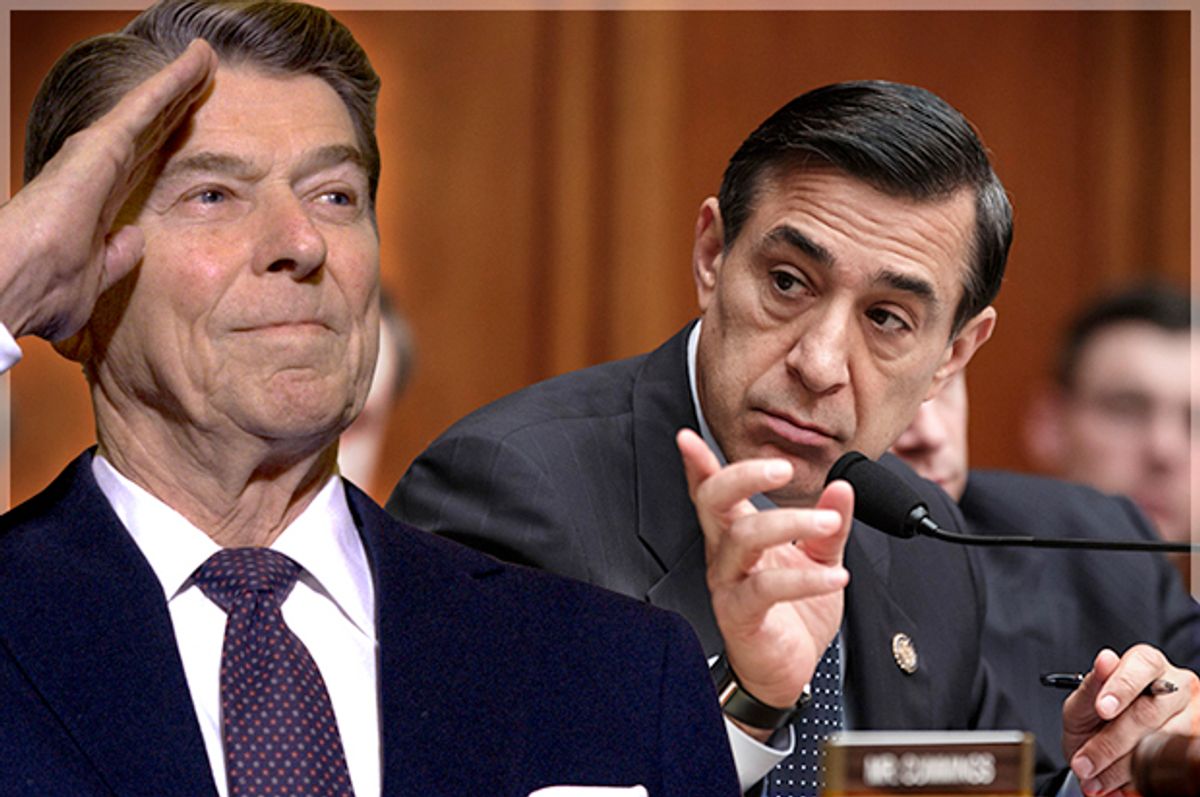 If you dig a little beyond the surface, you’ll find that within the world of liberals ridiculing conservative’s #Benghazi obsession, there is a sub-genre devoted to singling out Republican congressman and self-proclaimed “chief watchdog” Darrell Issa in particular. Besides the de rigueur mockery of a partisan foe, these barbs focus on Speaker Boehner’s decision earlier this year to effectively fire Issa as the lead investigator into the Benghazi affair and replace him with a “select committee,” led by Rep. Trey Gowdy, that will theoretically do a better job of finally unearthing proof that President Obama valued an election-year talking point about al Qaeda in retreat over the lives of four American citizens. Issa was reportedly unhappy about the committee’s formation and, with evident schadenfreude, progressives could see why.

Yet as tempting as it may be to deride Issa for his Benghazi blunders, an under-appreciated development from earlier this week shows that when it comes to the second of Issa’s dual obsessions, the supposed partisan bullying of conservatives by the Obama IRS, the House Oversight Committee Chairman has been a smashing success. Not in regard to uncovering evidence of a concerted plot to thwart right-wingers, of course — as is the case with Benghazi, there’s no “there” there for Issa to find — but in terms of the Republicans’ ultimate goal, weakening the besieged agency’s ability to regulate campaign finance to the point of near-nonexistence.

The story is told in a report released on Tuesday by the Center for Public Integrity, a left-leaning investigative journalism nonprofit. In brief, the CPI’s research finds that the IRS, never quite capable of keeping up with political activists and donors’ efforts to circumvent campaign finance laws through tax-exempt “social welfare” nonprofits, all but declared it wouldn’t even try after Republicans said the agency was making conservative groups jump through hoops while giving liberal ones the go-ahead. They were wrong on both counts — liberals and conservatives, both, were asked to provide further information (while also being allowed to continue their work as if they had already been approved) — but it hardly mattered. The coverage of the disproven allegations dwarfed that of their refutation and Democrats — already loath to defend most individual government agencies, much less the never-popular IRS — concluded it would be better to just move on than go to bat for the taxman.

Thinking in the short-term, as politicians are wont to do, letting what Paul Waldman cleverly called the IRS “scandalette” fade from the front-pages made sense. Democrats were already facing a tough election, and there was little reason to believe that talking about the IRS instead of jobs or wages or contraception would be the best way to inspire Democratic voters — who are notoriously uninterested in midterm contests — to hit the polls. But as the Los Angeles Times’ Michael Hiltzik noted in a recent Op-Ed, what makes sense for Democrats in 2014 is very different from what makes sense for progressive politics in the years to come.

As we can see in the IRS example, the process works on at least two levels. More obviously, when Democrats refuse to push back against Republicans’ demonization of vital government agencies — and, contrary to what Sen. Ted Cruz says, the IRS is certainly that — they implicitly signal to voters that what GOPers say must be, at least to some degree, the truth. If the IRS is targeting its political enemies already, who’s to say conservatives are wrong when they warn that Obamacare will lead to IRS “thugs” harassing the American people? If the government is lawless and predatory in this case, why wouldn’t it be the same in another? Pretty soon the IRS becomes a stand-in for government itself, and then glib one-liners like Reagan’s infamous quip that no sentence is scarier than “I’m from the government and I’m here to help,” sound that much less stupid.

Less conspicuously, but more importantly (because, let’s face it, no one is ever going to be able to turn the IRS into a popular symbol of government authority) is the way that the demagoguery over the IRS and agencies like it can lead to cuts that, in the end, bolster the argument that government simply cannot get the job done. Returning once again to Reagan, one could quite reasonably argue that his greatest legacy — at least in terms of governance, if not politics — is to kick off a process by which government is asked to do more with less until, inevitably, a mistake that could have been prevented with more resources is cited as proof that any amount of money sent to Uncle Sam is going to waste. That’s the story of the FDA and the VA for most of the past 30 years. With Republicans now using the scandalette as justification for further cutting its budget, it’s the story of the IRS, too.

Join the government-as-bogeyman and government-as-incompetent tropes together with the equally troubling reality of the “submerged state” (a word political theorists use to describe all manner of policies that help regular people but are designed to go unnoticed) and you end up with a status quo in which many people, quite reasonably, believe government is either an alien usurper of the popular will or, at best, a necessary evil. If Democrats and liberals are focusing their energies on culture war issues — same-sex marriage, universal contraception, immigration reform, etc., — then this is not necessarily an insurmountable hurdle. But if those on the left are interested in promoting equality and reining in the power of the one percent, and until someone figures out a way to do those things without the use of government, this state-of-play makes the likelihood of progress a whole lot more dicey.

Just something to keep in mind next time you hear a lefty snark that Darrell Issa doesn’t know what he’s doing.