Israel's harshest critics and most ardent defenders agree on one thing: The battle is really about America 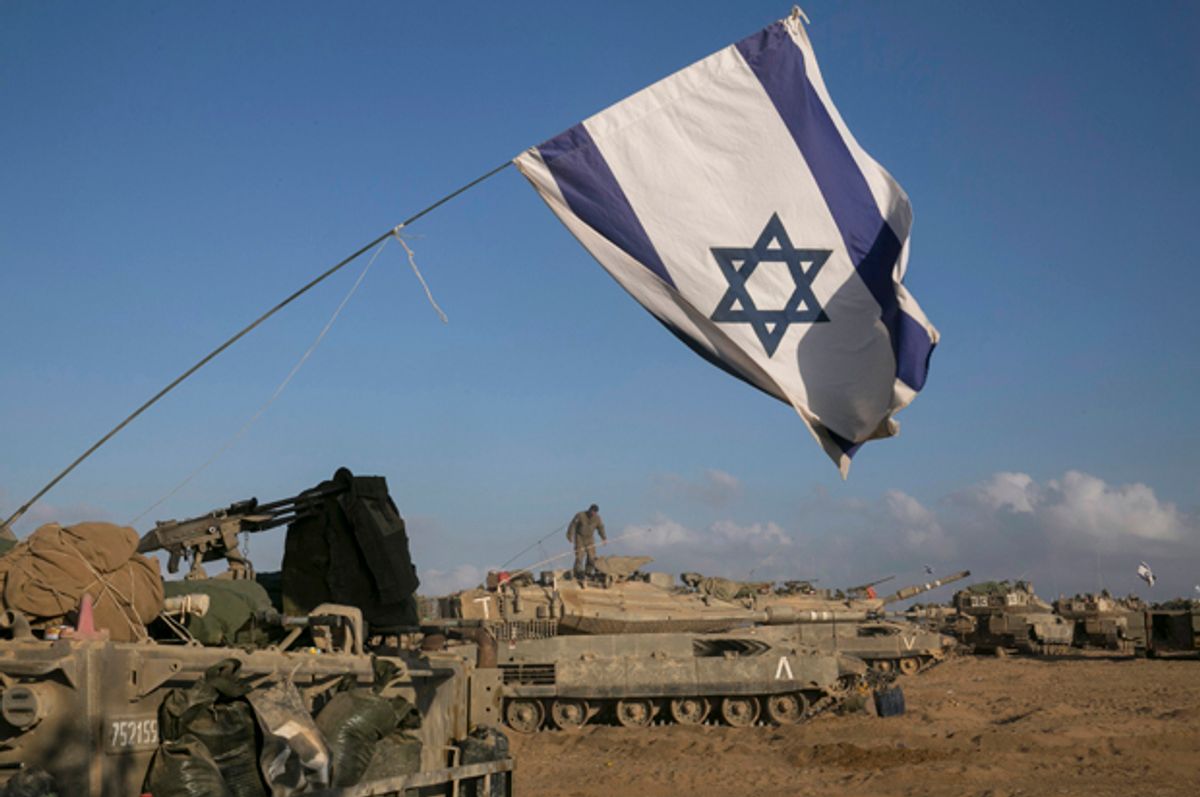 With Israeli tanks rolling into the Gaza Strip and Hamas fighters firing dozens of rockets into Israel every day, the two sides in the endless Middle East standoff appear to be replaying scenes from a recurring nightmare, with real-world tragic effects. I don’t mean to suggest that the conflict is in any sense symmetrical. As we have already seen, the worst price for this latest round of violence will be paid by the civilian population of Gaza, almost 2 million people fenced into a slice of arid seacoast with roughly the same land area as the city of Detroit. But for those of us in the West, and especially in the United States, the Israeli-Palestinian conflict plays out in public discourse, over and over again, as a drama of rhetoric and propaganda, accusation and counter-accusation.

Both in the real conflict on the ground and the ideological conflict for hearts and minds, both sides feel misunderstood and unfairly stigmatized – and if you’re willing or able to take the long view, they both have a point. Along with every other American journalist, I received emails this week from Arab-American groups complaining about the pro-Israeli bias of the mainstream media, and from Jewish activists eager to elucidate President Obama’s “pro-Muslim agenda” and his long-term campaign to undermine Israel. Within the American left, which for generations has been closely allied with the Jewish intellectual tradition, this ideological combat can often be intensely personal and painful. I’ve managed to stay out of the angry debates between friends and acquaintances in my Facebook feed – about whether Rachel Maddow is an Israeli shill, or whether American progressives are hypocrites for weeping over Gaza but ignoring the death toll in Iraq, Syria and Egypt – and I don’t even want to know what kinds of insults people are hurling at each other on Twitter.

What do we talk about when we talk about Israel? Perhaps this is an index of our bottomless narcissism, but the not-so-secret subtext of both pro-Israel and anti-Israel arguments is that they’re really debates about America and its role in the world. Israel is of course closely tied to the U.S. in military, economic, cultural and psychological terms, and in all likelihood would not exist if not for six-plus decades of staunch American support. Although it’s a distinctive society in many ways, Israel is also a familiar kind of place – a Westernized consumer democracy of yoga classes, designer cocktails and gay pride parades – in a way no Islamic Middle Eastern country even approaches. Israel can be read as an American proxy state, a wayward bastard child or (in the paranoid view) as a sinister force behind American politics, pulling the superpower’s strings. However you understand this “special relationship,” the genetic kinship is unmistakable.

Everything about the politics of the Israel-Palestine debate – which are mostly the politics of guilt, victimhood and mutual, purposeful incomprehension – is distorted and exacerbated by the gravitational effect of America. As I said earlier, both sides have valid points to make about the nature of that distortion. But I don’t mean to retreat to some journalistic posture of false equivalency and despair: Everybody has done bad things, and it’s just dreadful. Can we get back to watching HBO? That only fuels the hapless status quo, as captured so memorably in Mitt Romney’s phrase about kicking the can down the road, in which the U.S. appears subservient to the Israeli right wing while continuing to advocate for a two-state solution that will never happen. I have no solution to that dilemma, but it’s useful to understand that pro-Israeli and pro-Palestinian forces are responding to the same phenomenon – Israel’s inextricable relationship with the United States – and interpreting it in different ways.

First of all, Israelis and their American allies are justifiably outraged when leftist critics compare Israel to Nazi Germany or apartheid South Africa. It is not excusing Israel’s policy misdeeds or the racist excesses of Israeli settler culture to insist that such comparisons are intellectually lazy and dishonest, and serve only to pour gasoline on an already inflammatory situation. Now, there are specific areas, such as the tormented relationship between the Israeli military and Palestinians under occupation, where those analogies may come much too close for comfort. This was famously observed by no less an authority than former Shin Bet head Avraham Shalom (in the mesmerizing documentary “The Gatekeepers”), a man who had been born in Vienna and once saw Adolf Hitler speak in person.

But in the bigger picture, the differences are more striking than the similarities: For all its flaws, Israel is a functioning Western-style democracy that pays lip service to the rule of law and (like most other democracies) occasionally lives up to those promises. Dissent and free speech are generally tolerated, and more than 20 percent of Israeli citizens are Palestinian Arabs, who at least in theory possess full political rights. A dozen Arab Israelis hold seats in the Knesset, and an Arab judge has sat on the Israeli Supreme Court since 2004. There is unquestionably anti-Arab discrimination and ethnic tension between the Jewish and Arab populations, but it is ludicrous to compare that situation to Nazi Germany or South Africa. How many Jews hold similar positions in Muslim-majority nations? For that matter, how many African-Americans served as judges or cops or state legislators in the Jim Crow South?

So Israelis feel they have been unfairly demonized by American and Western progressives who ought to see the essential similarities between their societies, and also feel themselves (again with some justification) surrounded by enemies who would rather they disappeared. While Hamas’ rockets have been militarily ineffective – at this writing, only one Israeli civilian has been killed – they have engaged the semi-permanent condition of national PTSD resulting from decades of border wars and occupations and intifadas and suicide-bombing campaigns and all the rest of it. Now the Israeli military is certain to inflict many times the amount of damage on Gaza that the ragtag guerrilla bands of Hamas could ever inflict on Israel, while insisting the whole time that it is behaving honorably and that every atrocity that makes clear how cheaply it holds Arab lives (children killed on the beach, children killed in their bedrooms) is a regrettable accident for which the other side is to blame.

One Facebook post I saw from an old friend raised an argument I mentioned earlier, originating from the pro-Israel lobbying group UN Watch: If you’re outraged by the deaths of civilians in Gaza but didn’t say a word about thousands who died in terrorist attacks in Iraq, the slaughter of street protesters in Egypt or massacres in South Sudan and Nigeria, then you are motivated not by human rights concerns but by bigotry against Israel (and by extension by anti-Semitism, although that accusation was left unspoken). It’s a provocative argument, and anybody who tries to tell you there is no anti-Semitism on the pro-Palestinian or anti-Zionist left is lying. But the response is simple enough: Americans don't feel implicated in those other crimes, or at least not to the same extent. (One could argue that the U.S. is profoundly implicated in everything bad that happens in Iraq or Afghanistan.)

Like everything else about the grossly asymmetrical Israeli-Palestinian conflict, the current invasion of Gaza involves American guns, American money and the unswerving support of the American political elite and the mainstream media. If left-wing supporters of Palestine draw outrageous comparisons between Israel and murderous autocratic regimes, that is both a veiled claim that America itself is sliding toward fascism and an attempt to shock American liberals into decoupling from the Israeli cause. Despite voices like Noam Chomsky and Amy Goodman on the leftward fringe of the discourse, it doesn’t seem to be working. The American establishment – and most of the American public, if polls are to be believed – continues to identify strongly with the Israeli point of view, and views the marginalized, oppressed and displaced Palestinian population as an unmanageable Other, Islamic “militants” or “terrorists” who practice inhuman methods in pursuit of irrational goals. When we see those soccer-playing boys dead on the beach, who look surprisingly like individual human beings for whose deaths we bear some ultimate responsibility, the contradictions become exceedingly painful.

What ties together those who forcefully support Israel and those who forcefully oppose it is that both groups see the essential kinship between Israel and the United States, and interpret that historical legacy in different ways. Supporting Israel has become a benchmark of American patriotism -- which means that no major presidential candidate of either party can ever question that support -- while those who oppose Israeli belligerence and expansionism are generally the same people who see U.S. foreign policy as a baleful influence around the globe. Viewed this way, discussions about Israel and Palestine in the U.S. are really metaphorical debates about America’s role in world history – about whether we are a good or a bad nation in the end, and whether our mystical sense of national purpose can be redeemed.

Of course there’s more to the history of the modern State of Israel than its fraught relationship with the United States. Israel’s roots extend back to 19th-century European Zionism, and before that deep into the peripatetic story of the Jewish people. But in the decades since Israel was born out of the global guilt and shame of the Holocaust, America has become its adoptive parent, banker and principal benefactor. From the American perspective Israel looks something like Frankenstein’s monster, a morally dubious and arguably unnatural creation that was stitched together with the noblest of intentions but not much foresight, and that produced a painful litany of unintended consequences. In that analogy we are Victor Frankenstein, who can never unmake his wayward creature, control it or untether himself from it. If I remember the story correctly, they destroy each other in the end.