Superhero switch-ups: A history of race and gender switches in comics 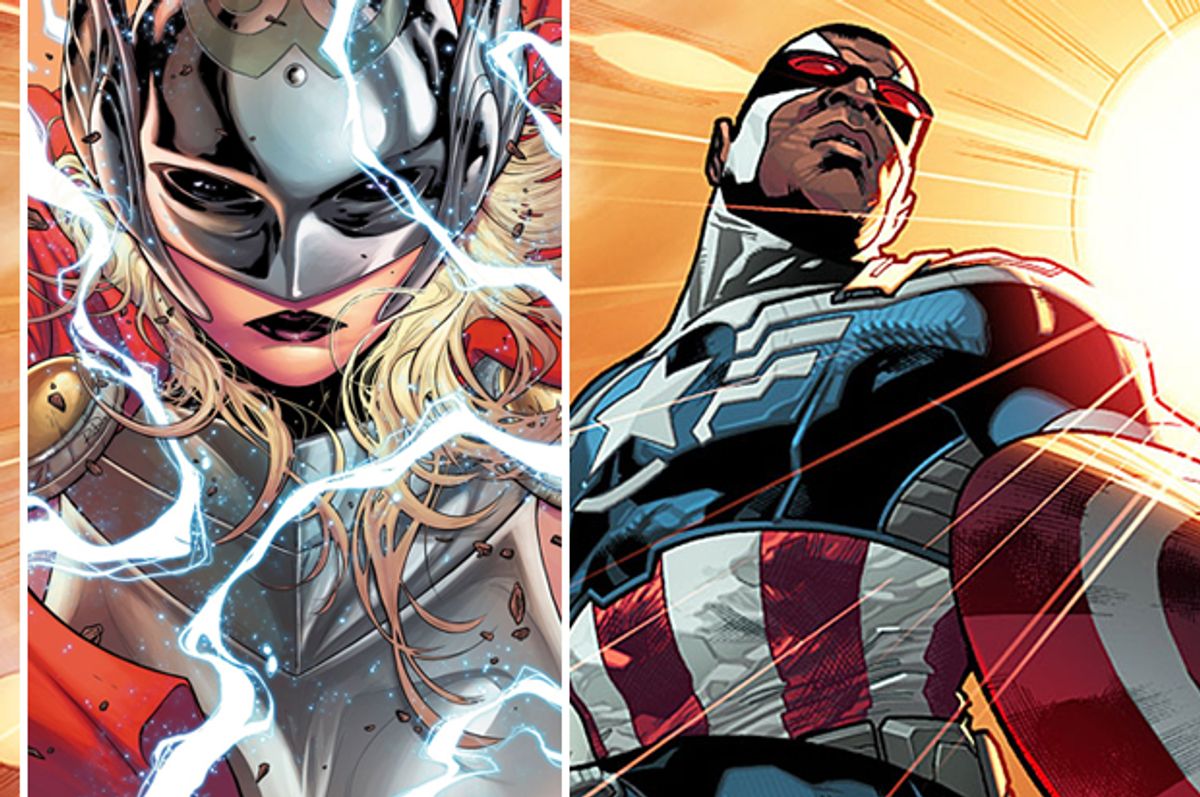 Marvel Comics turned heads this week with the announcements of a black Captain America (Cap’s old pal Sam Wilson, the Falcon, will be taking up the shield) and a female Thor (an unknown woman will be wielding Thor’s hammer Mjolnir after something happens to make the son of Odin unworthy of his mystical weapon). Though women have picked up Thor’s hammer before, and Wilson is not the first black Captain America, the geek-fueled media storm went nuclear thanks to the prominence of the Avengers, the ever-outraged Internet and announcements on “The View” and “The Colbert Report.”

Fans of increased diversity in the incredibly influential world of comics have praised the changes. Pinheaded geeks who can’t handle change, even for a couple years (which, let’s be real, is how long these switches typically last) have pitched online hissy-fits. White dudes who feel like they are a persecuted minority have been predictably outraged. Such reactions are common when the pasty white, overly testicular casts of old properties are updated. Remember the hubbub when the reimagined “Battlestar Galactica” turned Starbuck into a woman? While changing the gender or race of a character, much like killing a character, is definitely part publicity stunt, it’s nice to see publicity stunts that also feel like progress while pissing off jerks.

In comics, there’s a major tradition of new heroes taking up an existing character's mantle, especially at DC: Jay Garrick, Barry Allen and Wally West have all been the Flash. A metric boatload of guys (and aliens) have been Green Lantern. For most of the past couple of years, villain Dr. Octopus took over the mind of Peter Parker and was Spider-Man. When Batman and Captain America were apparently dead, their former sidekicks Dick Grayson and Bucky Barnes took over.

But while Captain America and Thor aren’t the only white, male flagship characters to be temporary replaced, they also aren’t the only ones who have changed gender or race. There’s a small but clearly growing tradition in comics of embracing diversity. Here are a few examples of heroes who, over the years, have made the fanciful universes of superheroes look a little more like the world we actually live in.

This character has nothing to do with the classic FX series. The Shield is an American-themed hero who debuted in 1940 (over a year before Captain America) and features the same star-spangled outfit, a very similar super-soldier origin, and the same type of Nazi-fighting early adventures. In fact, the reason Captain America carries a round shield is that his original triangular shield looked too much like the symbol on The Shield’s chest. In addition to Marvel’s recent switcheroos, Archie’s Dark Circle line announced this week that a new version of the character will be a woman, which is a pretty cool development for one of comics’ most obscure yet influential characters.

In 2000, Marvel launched their Ultimate Universe as a place to reinvent their characters, make them more contemporary, and take more chances than in the regular Marvel Universe. The standout comic from the Ultimate line was Brian Michael Bendis and Mark Bagley’s “Ultimate Spider-Man,” which created a new Peter Parker who was fresh yet completely in the spirit of Stan Lee and Steve Ditko’s original. When Peter Parker died — he took a bullet for Captain America — the death stuck, unlike deaths in the regular universe. Peter was then replaced by Miles Morales, a half black, half Hispanic kid who was also bitten by a radioactive spider. Miles has been Spider-Man ever since in the Ultimate Universe, and let’s hope the brain trust who make the Spider-Man films decide to use him. After the abysmal “Spider-Man 2,” that franchise needs helps fast.

Miles wasn’t the first Hispanic Spider-Man. Back in 1992, Miguel O’Hara debuted as Spider-Man 2099, a scientist who gained his powers through — what else? — a laboratory accident. These days, Miguel is stuck in the Marvel present due to some time-travel shenanigans, and he headlines a new series.

In “Invincible — “Walking Dead” creator Robert Kirkman’s long-running, awesome superhero series from Image — just about every trope of corporate superhero comics is trotted out in some way, including the replacement of the lead character. When Mark Grayson temporarily lost his powers due to a “Scourge Virus” (long story), young black hero Bulletproof stepped into Invincible’s blue-and-yellow spandex.

Before Samuel L. Jackson played Nick Fury, he was the model for a new Nick Fury in the Ultimate Universe. Those comics — particularly the first few volumes of the Avengers-like “Ultimates” by Mark Millar and Bryan Hitch in 2002 — provided a blueprint for the Marvel Cinematic Universe. Due to the success of the MCU, the black Nick Fury is far more well-known among the general public, and the regular Marvel Universe has added a version of him in the form of Nick Fury Jr. who also looks a lot like Jackson.

Back in the 1980s, drinking enthusiast Tony Stark went further off the wagon than usual, losing his company, his friends and his Iron Man armor. The armor was taken up by Stark’s longtime friend James “Rhodey” Rhodes, who has been played by Terrance Howard and Don Cheadle in the “Iron Man” movies.

The first two Green Lanterns — Alan Scott and Hal Jordan — are boring white guys, but DC has since given the ring to John Stewart (who is black, and has been around since the seventies) and Simon Baz (who is Lebanese American, and debuted in 2012). The Atom — a character with the ability to shrink — has also been a vehicle for diversity at DC, with Ryan Choi from Hong Kong filling Ray Palmer’s subatomic shoes.

The original Captain Marvel — real name, Mar-Vell — was an alien and a Kree warrior. He died in one of the most realistic and (probably) irreversible deaths in the history of comics: Mar-Vell died of cancer in a very moving graphic novel by legendary creator Jim Starlin. There have been a few female Captain Marvels since then (including Monica Rambeau) but the most prominent is pilot Carol Danvers, whose current series written by Kelly Sue DeConnick is witty and swashbuckling and fun, adding to speculation that this Captain Marvel could be headed to the big screen before long. To bring this article full circle, many folks have suggested the perfect actress would be Katee Sackhoff — TV’s female Starbuck. She looks right for the role and is an expert in playing a badass pilot.

Since Carol Danvers originally went by Ms. Marvel, the current Ms. Marvel Kamala Khan is another example of a hero switching race, since she is a Pakistani-American. Ms. Marvel is part of a wave of recently launched female-centric series and guess what: the first issue is headed for a sixth printing.

When good comics, good sales and greater diversity all line up, even sad, hammer-less, old-school Thor has to tip his winged helmet and smile.