Blood in the streets: More than 500 dead in Gaza 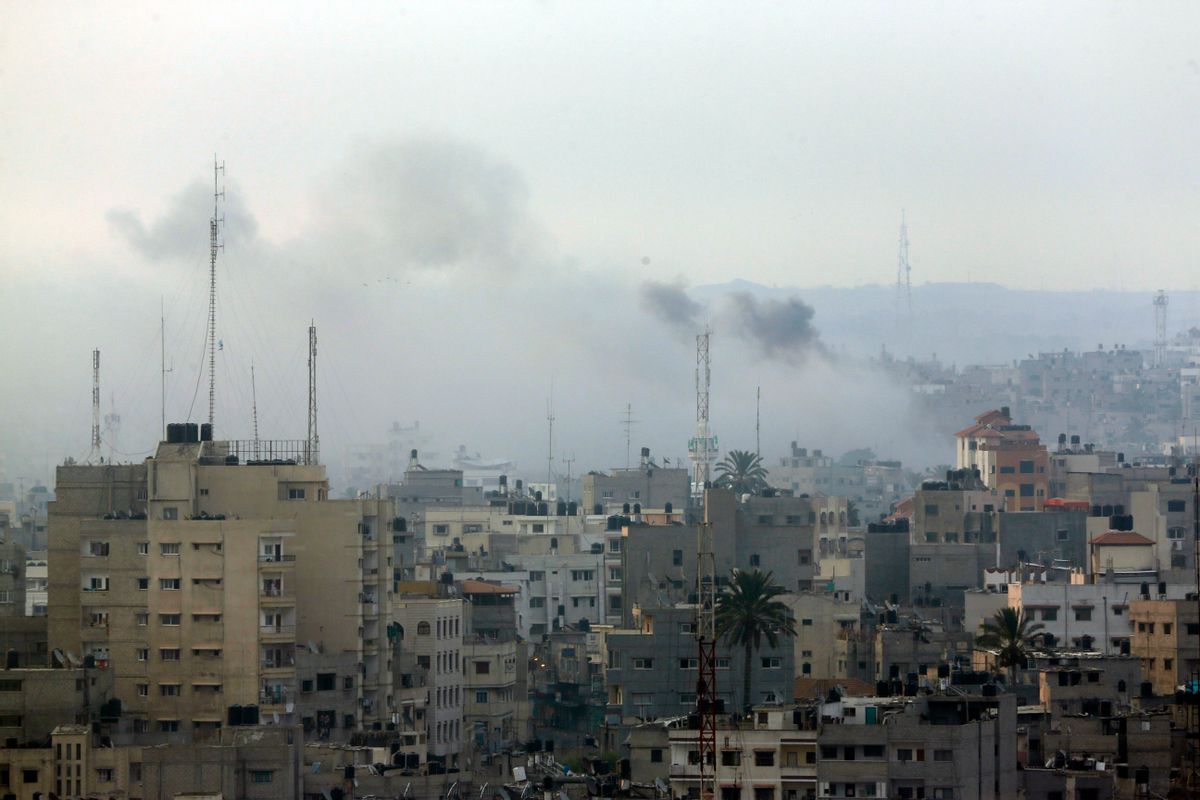 Smoke from Israeli strikes rises over Gaza City , northern Gaza Strip, Sunday, July 20, 2014. Israel said it widened its ground offensive early Sunday, sending more troops into Gaza after demolishing more than a dozen Hamas tunnels and intensifying tank fire on border areas. Since the start of Israel-Hamas fighting almost two weeks ago, over 300 Palestinians were killed and 2,700 wounded in Israeli air and artillery strikes, according to Palestinian health officials. One-fourth of the deaths were reported since the start of the ground offensive late Thursday, the officials said.(AP Photo/Lefteris Pitarakis) (AP)
--

GAZA CITY, Gaza Strip (AP) — The U.N. chief and the U.S. secretary of state headed to Cairo on Monday for the highest-level attempt yet to end two weeks of Israel-Hamas fighting that has killed at least 510 Palestinians and 20 Israelis and driven tens of thousands of Gaza residents from their homes.

Despite the new cease-fire efforts by U.N. Secretary-General Ban Ki-moon and U.S. Secretary of State John Kerry, Israeli aircraft continued to strike homes in Gaza while Hamas fired more rockets and tried to infiltrate into Israel.

In one Israeli strike, 25 people were buried under the rubble of a home in the southern town of Khan Younis, including 24 from the same family.

Hamas militants, meanwhile, tried to sneak into Israel through two tunnels, the latest in a series of such attempts. The Israeli military said 10 infiltrators were killed after being detected and targeted by Israeli aircraft.

Hamas also fired 50 more rockets at Israel, including two at Tel Aviv, causing no injuries or damage. Since the start of the Israeli operation, Hamas has fired almost 2,000 rockets at Israel.

Despite the rising death toll, there was no sign of a let-up in the violence.

Israeli Defense Minister Moshe Yaalon said Monday he is prepared to continue the offensive "as long as necessary" to halt rocket fire and other attacks from Gaza on Israelis.

Israel accepted an Egyptian call for an unconditional cease-fire last week, but resumed its offensive after Hamas rejected the proposal.

Hamas says that before halting fire, it wants guarantees that Israel and Egypt will significantly ease a seven-year border blockade of Gaza.

"The resistance (Hamas) will not respond to any pressure," Hamas spokesman Sami Abu Zuhri said in a text message, in a reference to the renewed cease-fire efforts. Kerry is also pushing for an unconditional cease-fire.

Sunday marked the single deadliest day in Gaza since the conflict erupted on July 8, with more than 100 Palestinians killed, according to Palestinian health officials.

In response to the escalation, the U.N. Security Council expressed "serious concern" about the rising civilian death toll and demanded an immediate end to the fighting.

Early Monday, an Israeli airstrike hit the home of the Siyam family in southern Gaza, near the town of Rafah, said the Palestinian Center for Human Rights. The strike killed 10 people, including four young children and a 9-month-old baby girl, said Palestinian health official Ashraf al-Kidra.

The attacks came a day after the first major ground battle of the offensive, in the Shijaiyah neighborhood of Gaza City.

At least 65 Palestinians and 13 Israeli soldiers were killed in Shijaiyah, while thousands of terrified Palestinian civilians fled the devastated area, which Israel says is a major source for rocket fire against its civilians.

Large sections of Shijaiyah were pulverized by a barrage of Israeli tank and artillery bombardments and repeated Israeli air strikes that buffeted the densely populated neighborhood for most of Sunday.

On Sunday afternoon, rescue workers making a last sweep through Shijaiyah had heard the voice of a woman under the rubble, pleading for help.

The team left because it deemed the situation too dangerous, but returned later Sunday with a bulldozer to rescue the three people trapped underneath.

Seven-year-old Bissam Dhaher, her face bruised and bandaged, was recovering Monday at Gaza City's Shifa Hospital. Relatives watched over her as the girl slept. Her uncle remained hospitalized, while an aunt — the one who had called out for help — was released, relatives said.

On Sunday evening, Hamas spokesman Mushir al-Masri in Gaza claimed his group had captured an Israeli soldier. An announcement on Gaza TV of the soldier's capture set off celebration in the streets of West Bank.

But there was no official confirmation or denial of the claim in Israel.

For Israelis, a captured soldier would be a nightmare scenario. Hamas-allied militants seized an Israeli soldier in a cross-border raid in 2006 and held him captive in Gaza until Israel traded more than 1,000 Palestinian prisoners, some of whom were involved in grisly killings, for his return in 2011.

Palestinian officials said at least 510 Palestinians were killed and more than 3,100 wounded since July 8. On the Israeli side, 18 soldiers and two civilians were killed during this period, and dozens wounded, including soldiers.

Kerry said Sunday that the U.S. supports the Egyptian proposal for a halt to the hostilities that Israel accepted and Hamas rejected last week.

Hamas remains deeply suspicious of the motives of the Egyptian government, which has banned the Muslim Brotherhood, a region-wide to which Hamas also belongs.