"Long slide into the abyss": Cheney's old pal Ahmed Chalabi is back 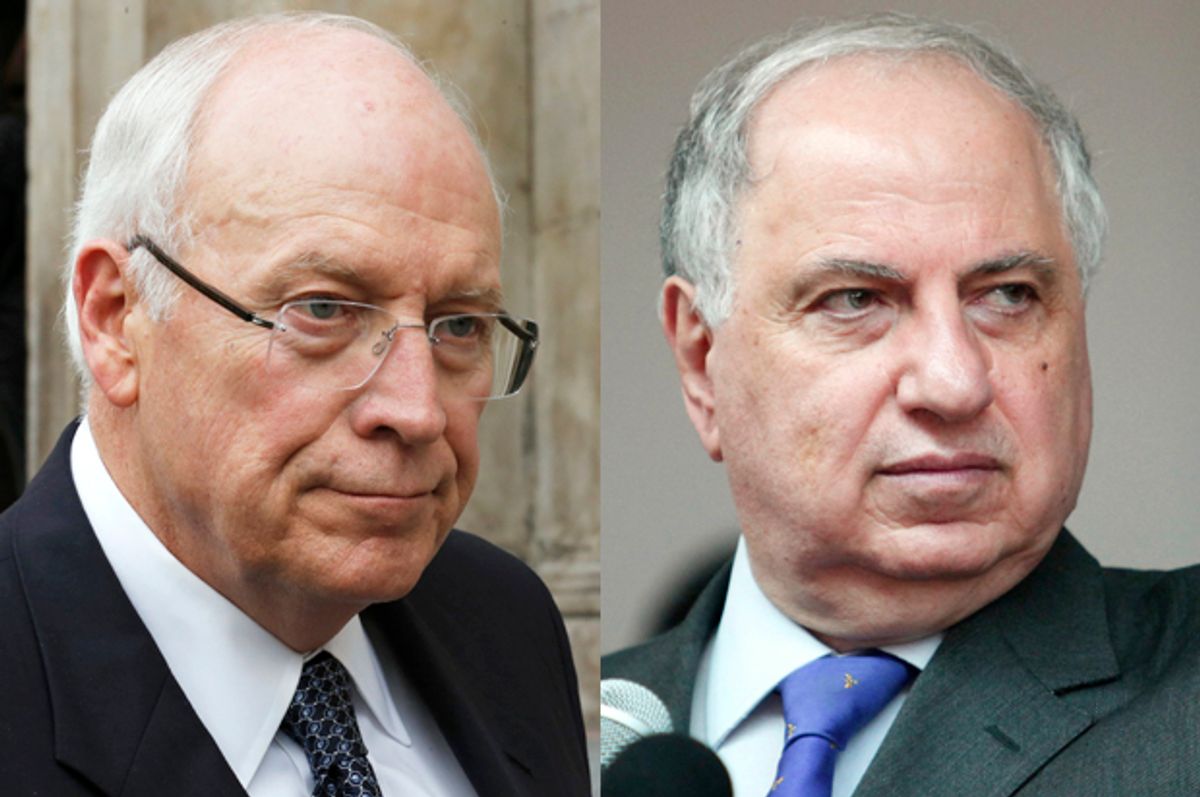 One of the iconic images of the early days of the Iraq invasion was the picture of the neocon George Washington, former banker and conman Ahmed Chalabi going back to his homeland as part of a brilliant plan to airlift exiles into the country to create the "new Iraqi army" under the auspices of his front group the Iraqi National Congress.

U.S. Marine Gen. Peter Pace explained that "these are Iraqi citizens who want to fight for a free Iraq, who will become basically the core of the new Iraqi army once Iraq is free." It was just one of many farcical elements of the Iraq invasion. (Recall the Jessica Lynch debacle as well as virtually everything that happened under Paul Bremer and the Coalition Provisional Authority.) But then the group that planned and executed that war were very silly people, and Chalabi had their number from the beginning. Jane Mayer in the New Yorker had his number. In her seminal piece from July 2004, she traced back his involvement to the 1990s when Chalabi was cut loose from his long association with the CIA and then went hunting for new patrons. He's a clever fellow:

Chalabi set out to win these people over. Before long, Chalabi was on a first-name basis with thirty members of Congress, such as Trent Lott and Newt Gingrich, and was attending social functions with Richard Perle, a former Assistant Secretary of Defense, who was now a fellow at the American Enterprise Institute, and Dick Cheney, who was the C.E.O. of Halliburton. According to Brooke, “From the beginning, Cheney was in philosophical agreement with this plan. Cheney has said, ‘Very seldom in life do you get a chance to fix something that went wrong.’”

Wolfowitz was particularly taken with Chalabi, an American friend of Chalabi’s said. “Chalabi really charmed him. He told me they are both intellectuals. Paul is a bit of a dreamer.” To Wolfowitz, Chalabi must have seemed an ideal opposition figure. "He just thought, This is cool—he says all the right stuff about democracy and human rights. I wonder if we can’t roll Saddam, just the way we did the Soviets,” the friend said.

Chalabi shrewdly understood how Washington works and realized that he needed to leverage some serious state power in his favor. And so he befriended the Republicans in congress who, during the Clinton years, had done their usual hypocritical posturing and turned into situational peace loving isolationists in the face of a Democratic Commander in Chief. Mayer reported that the GOP loved the idea, with right wing extremist Jesse Helms being particularly receptive to the concept of putting Clinton into a box over Iraq. Nobody cared at the time that Chalabi had been convicted in abstentia for being responsible for the collapse of Jordan's biggest bank or that the CIA found his "information" to be unreliable. Why would they?  Their crusade against the president was always based upon lies and misrepresentations. They were brothers in arms.

The night Chalabi arrived in Iraq having enabled an invasion of his own country was a triumph surely very few have experienced. It reached a high point when he sat next to Laura Bush at the 2004 State of the Union but unfortunately, he had betrayed his patrons by doing a little double dealing with their true mortal enemy: Iran. (You know the old Neocon saying: Wimps go to Bagdad, Real Men go to Tehran.) He was accused of forging Iraqi currency with stolen plates from the Iraq mint. And they believed him to have sent his Iranian friends some very sensitive information. These charges were never proven but after a brief stint in the Iraq government in 2005, in which he was held (rightly) responsible for his influence on the U.S. government to institute "de-Bathification" and even more charges of corruption, Chalabi withdrew from the scene.  The last we had heard he was holding salons in his basement with various Iraqi experts on finance and government.

So why bring all this up now? Well, heeee's baaaack. Since the eruption of violence and the emergence of the terrorist group ISIS in Iraq last month, the beltway and the press have made the belated observation that Prime Minister Maliki's government has failed. And who should turn up as a prime candidate to replace him but good old Ahmed.  This piece in Foreign Policy magazine by Jane Arraf gives a fine flavor of his current situation:

He sits surrounded by Iraqi paintings -- at Baghdad's declining number of art galleries, his purchases alone help keep some artists afloat. In the garden in the evening, fans with water reservoirs spray a cooling, rose-scented mist. He is renovating his swimming pool, where neoconservative American officials used to swim when he was still a darling of President George W. Bush's administration. Now, the U.S. Embassy across town is evacuating its nonessential staff, and the remaining Foreign Service officers aren't allowed even to cross the street.

A full rationale for his campaign follows that introduction, mostly consisting of reasons as to why nobody should believe anything they know about Ahmad Chalabi. But it's a fascinating fantasy of a political career that doesn't actually exist except in his own mind. Certainly, the idea of him becoming prime minister seems to be a bit exaggerated. After all, he isn't exactly popular. Last April Iraq had an election and Prime Minister Maliki's slate got three quarters of a million voets. Chalabi's got a whopping 10,000. The groundswell will need to be an earthquake off the richter scale for him to win election any time soon.

But that hasn't stopped him from getting up to his old tricks, and this one's a doozy, harking back to his days of giving misinformation to the CIA about Saddam's non-existent weapons of mass destruction. It's bold and it's sexy and it sure got everyone's attention. Remember that $430 billion that was stolen by ISIS from a bank in Mosul? Enough money to finance a terrorist jihad from hell that would make Osama bin Laden look like a small time crook? Apparently Chalabi is among those who've been peddling the story. And according to Iraqi bankers and the governor of Ninevah province where Mosul is located, there's no evidence this ever happened. And perhaps most telling is the fact that ISIS never took credit for this alleged heist while taking full credit for the huge stockpile of American military equipment they looted.

It's always possible that Chalabi and his cohorts are telling the truth this time. But considering his history, skepticism is probably called for. In fact, if Chalabi were to proclaim that the sun is going to come up in the morning, skepticism is probably called for. Sadly, as one anonymous Western diplomat quipped, Chalabi's reemergence is part of "Iraq's long slide into the abyss." If he somehow ends up running the country after all this it will be the ultimate joke on the United States. Unfortunately, the Iraqis are unlikely to think it's very funny.