Dinesh D'Souza's laughable embarrassment: A review of "America: Imagine the World Without Her" 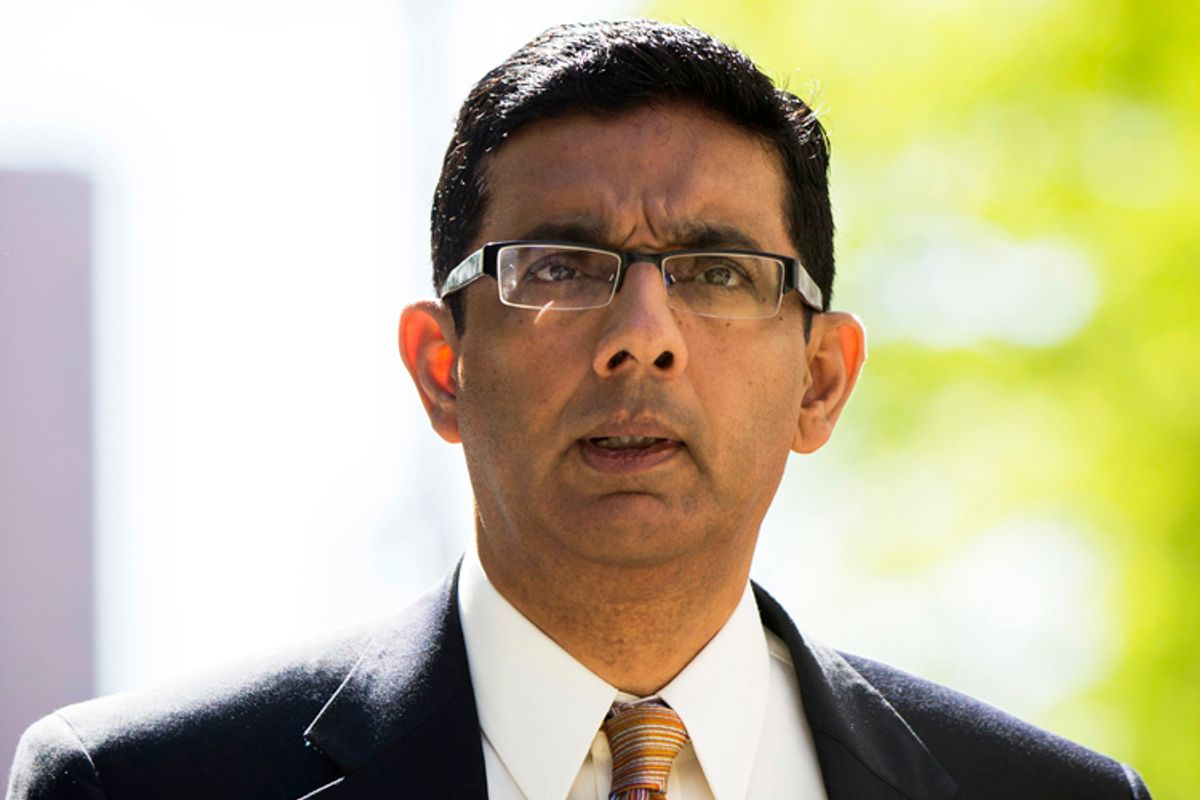 If you’re reading a review of Dinesh D’Souza’s "America: Imagine the World Without Her," the film isn’t for you. "America" isn’t a film to be considered; it is not even a persuasion piece. The argumentation, such as it is, is far too thin and weary to even properly earn the label of propaganda, and the entire project drips with a vaguely self-aware déjà vu. The audience "America" is intended for has seen all of its tricks before, in so many Bill O’Reilly “history” books and weekend Civil War reenactments, where good ol’ boys swinging Stars 'n’ Bars roleplay a win Dixie couldn’t quite pull out in real life. It’s a movie designed to confirm the things a person already believes, with a little Rand Paul stumping thrown in for good measure – an all-time low of infotainment associations even for a dude named "Rand."

"America" has been billed as a movie about what the world would be like without the United States of America, sort of like 2004’s "A Day Without a Mexican" in reverse. And at the top of the film, as D’Souza’s weepy narration tracks over the computer-generated dissolution of a number of American monuments, it does seem to flirt with the idea of being such a film. But it’s not. Instead, a sharp right turn takes D’Souza’s narrative to Howard Zinn’s "A People’s History of the United States," from which he draws five theses he claims are insidiously peddled by Alinsky-inspired pinkos. Why would such pinkos peddle such theses? D’Souza argues that redistributive economic policies are only ever styles of reparations, and rely upon shame narratives to build up political support; to combat the specter of evils like welfare and universal healthcare, therefore, D’Souza must defeat the five-point myth of American suckdom.

The lies D’Souza must disabuse us of, in order: First, that the genocide of Native Americans happened in relation to the conquest of their land; second, that African slave labor was exploited to build the American economy; third, that Mexican territories were conquered to form the U.S. Southwest; fourth, that U.S. wars abroad have involved imperial motives; fifth, that capitalism is bad. He goes to the trouble of listing these myths in text on what appears to be a massive parchment-esqe Powerpoint slide, and the structure of the film is a methodical treatment of each in turn.

A generous assessment would be that what follows is more heat than light. In reality there is neither heat nor light, because D’Souza styles himself as an inquisitive but unbiased neocon Sherlock on a quest for the truth rather than a bullshit-busting insult comic a la libertarian superheroes Penn & Teller. He dissembles and equivocates, sure, but in a mealy-mouthed monosyllabic way that must appeal to conservatives too dumb for Douthat. There’s something a little limp and depressing about propaganda that can’t even pump you up; "America" falls into that category of squishy grease-soaked hype that’s spent too long under the heat lamp.

The argumentation itself is bad, laughably bad. Native Americans were bad treaty-keepers who were already killing each other, the brutes, a claim D’Souza curiously follows up with the assertion that they all died of disease anyway – just naturally, just like that, out of nowhere. As for African slaves, D’Souza is content to point out that some whites were indentured servants and some blacks owned slaves themselves; in the wacky world of Dinesh, racism has no legacy, only a distant past. Were Mexican territories conquered? Yeah, D’Souza submits, but then he gets a Mexican-American to say that’s cool with him, and Ted Cruz shambles briefly on to bemoan the status of Texans under Mexican rule, which I guess coalesces into a weird unspoken just war theory. Watching "America" in an empty theater in Dallas (literally empty, only my husband and I on a Friday night) I couldn’t help but recall Ted’s stint as Texas solicitor general, a job he’d honored by trying to secure schools’ right to force the pledge of allegiance on kids, and wonder if I would’ve preferred Santa Anna instead.

As for U.S. wars abroad, D’Souza supposes the torture of a Vietnam POW in the Hanoi Hilton made the whole thing even, and glosses over Iraq and Afghanistan in a couple of slick asides: we gave them democracy! His discussion of American capitalism is even stranger and more schizophrenic, dashing between clips of Michael Moore and Occupy and alighting briefly upon a black woman who used to be on welfare but then got off it because her friends told her it was ungodly. She then muses that she didn’t even know there were churches while she was on welfare. Just didn’t even know the Christian religion had institutional meeting places, no idea what all those buildings with crosses on top were, and D’Souza nods gravely along: this is what welfare does, the viewer intimates.

There are a handful of eccentricities per segment that I have no space to report, chief among them the assertion that Alexis de Tocqueville is a better historical source on Vietnam than Howard Zinn, that Saul Alinsky literally worshipped the Devil, that you just can’t trust Matt Damon. The climax of the film is a sad parade of D’Souza shamed and martyred in handcuffs for a crime he admits he committed, but suggests he was especially targeted for because, he claims, most people commit three felonies a day.

The film sputters out to some stock shots of blonde kids playing at Fourth of July parades interspersed with aerial shots of purple mountains majesty and amber waves of grain, all set to some Mumford & Sons. What did I just see, one wonders, and maybe the confusion is intentional, like a magician’s wild gesticulation to conceal sleight of hand. Because at the end of the day "America" isn’t really about history or narratives, it’s about arguing that any change in economic policy favoring the poor can only be traced back to people hating the United States of America. Keep your eye on the ball, and that’s what D’Souza is batting at.