From coquette to cold-eyed killer: How Scarlett Johansson became the face of female horror

With "Her," "Under the Skin," and "Lucy," ScarJo has morphed from run-of-the-mill sex symbol into something darker 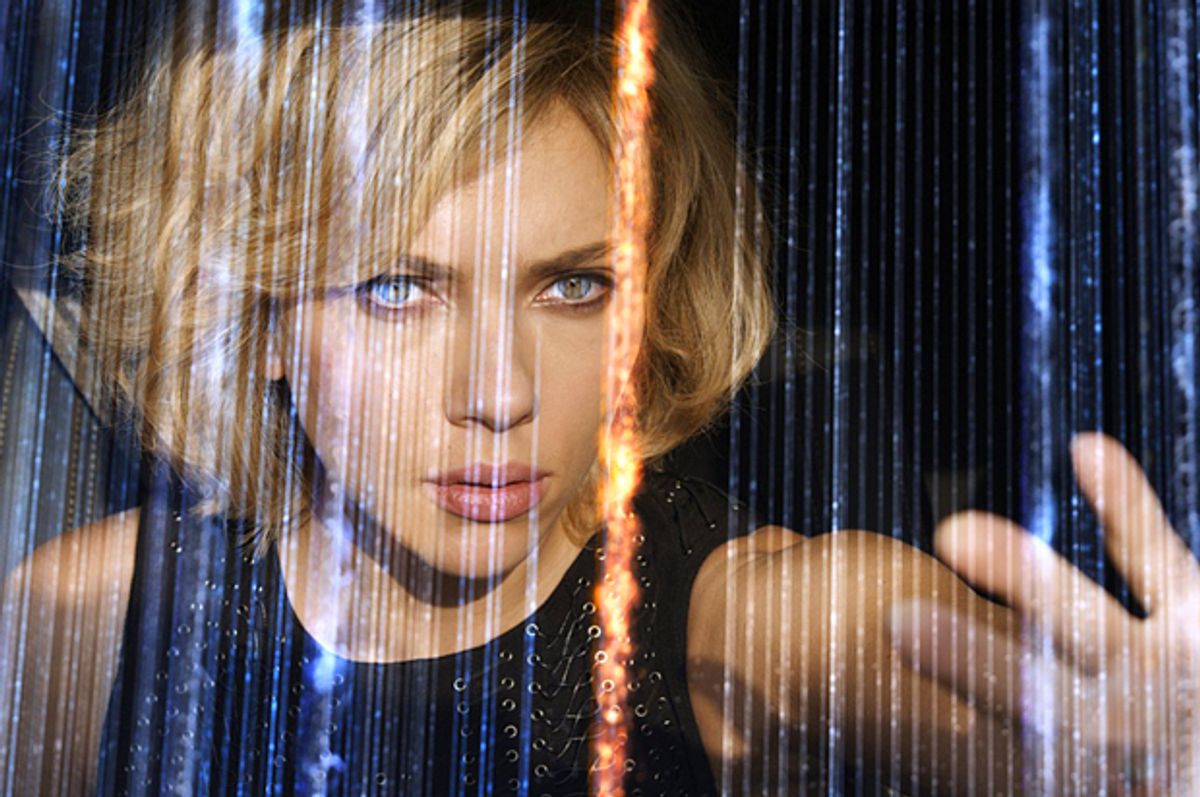 “Lucy,” released this week, is many things: It’s director Luc Besson’s return to action filmmaking. It’s Scarlett Johansson’s first chance to play the lead in an action film, having proved herself more than capable while playing Black Widow in “Iron Man 2,” “Captain America 2” and “The Avengers.” It’s the most nonsensical sci-fi premise in a summer movie line-up filled with extremely nonsensical sci-fi premises: Johansson plays a chemically enhanced drug mule who learns to use “more than 10 percent of her brain,” and the remaining 90 percent turns out to be filled with superpowers such as shape-shifting and telekinesis. (Jesus. You’d think she’d just take up chess or something.) But, perhaps most puzzlingly, “Lucy” is the third film in seven months in which Johansson has played a superhuman creature who exceeds her design parameters and destroys men’s lives. Somehow, without anyone quite realizing it, Scarlett Johansson has transitioned from a run-of-the-mill sex symbol into the face of female horror.

Consider the trailer for “Lucy”: Johansson begins as an ordinary party girl, forced by drug-cartel back-alley surgery to carry around a packet of blue powder in her intestines. (Besson notes that this version of Johansson, who wears the sort of ratty leopard-print coat and red bustier that movies invariably deploy to signal “trashiness,” is not a very interesting person: “She doesn’t have particular skills. She's even a little stupid," he told the Wall Street Journal.) Johansson is then abducted by a different set of men, who threaten her with rape and kick her in the stomach. The packet rips, Johansson goes through a trippy little power-up sequence, and, et voilà, she’s not stupid anymore. The first thing she does with her newfound intelligence? Naturally, she starts killing men.

Intelligence, in other words, makes Scarlett scary. It also makes her emotionless: “I don’t feel pain, desire, fear,” she tells Morgan Freeman. “All things that make us human are fading away.” If a woman’s brainpower robs her of humanity, is it worth having? Should she be trusted with it? Without seeing the full movie, it’s impossible to say, but the connotations of another line she speaks — “all this knowledge about everything! I don’t know what to do with it!” — are not reassuring.

Taken on its own, this conclusion might be a reach. But it lines up eerily with Johansson’s arc as Samantha in “Her.” Created as a peppy, helpful computerized assistant for the tremblingly sensitive divorcée Theodore (again, Johansson’s character doesn’t start out with a tremendously involved inner life; director Spike Jonze instructed her to play Samantha as someone who “doesn’t have any fears or doubts or insecurities or baggage”), Samantha not only sparks up a sexual relationship with Theodore, she begins educating herself, learning about physics and connecting with other AIs to invent an interface that doesn’t require matter. The result of Samantha’s scientific genius is, of course, infidelity — in between revolutionizing technology as we know it, she manages to have affairs with a staggering 671 people — and soon enough, she’s gotten so smart that she’s transcended space and time, leaving poor Theodore crying into the sunrise.

Of course, the damage wrought by female empowerment in “Her” is emotional, rather than bullet-based. (Though we are assured, by Besson, that Lucy will also transcend space and time at the end of the film — presumably with more car chases and fewer ukulele chords along the way.) Things get a lot more physical in “Under the Skin,” where Johansson plays Laura, an alien sent to earth specifically so that she can seduce men and harvest their internal organs. This film actually runs the standard arc in reverse: Johansson’s character Laura starts out with intergalactic powers and creepily monotone affect — again, a lack of inner self is key. Where Lucy is “stupid” and Samantha merely lacks experience, Laura is flat-out incapable of human emotion — and eventually exceeds her capacities by experiencing pity for one of her captives, setting him free, and trying to act like a human girl. Of course, the second Laura stops destroying men, one of them rapes her and sets her on fire, perhaps out of fear that she might one day learn to read.

Stories in which women magically “awaken” to their full potential and immediately become terrifying threats didn’t start with Johansson. The archetypal narrative here is the Dark Phoenix Saga, a 1970s X-Men plotline in which humble Jean Grey, a mutant with vast but mostly untapped psychic powers, has them activated by a burst of solar radiation. She, too, transcends her physical form, and then promptly returns to it, only to fuck everything up on an intergalactic scale, getting into BDSM, driving men insane with her mind-control powers, and destroying the civilization of an entire planet so that she can use its sun to fuel her journey of disastrous self-actualization. (In the film adaptation, “X-Men 3: The Last Stand,” the patriarchal anxieties expressed are even more hilariously overt: Jean uses her powers to kill first her husband, then her boss-slash-father-figure Professor X, and then hits on Wolverine, who’s forced to kill her to save humanity from a single and sex-positive version of Famke Janssen.) In the original, the men in Jean’s life survive, but are appalled by her terrible new powers — “you could not become the Dark Phoenix and remain true to yourself, the Jean Grey I fell in love with,” Cyclops informs her, sounding for all the world like a guy who feels emasculated by his wife’s promotion — and the only way for Jean to become “good” again is to abdicate that power in the most extreme way possible, by committing suicide. The concluding pages praise her decision: “Jean Grey could have lived to become a god. But it was more important to her that she die… a human.”

Well, yeah. It was more important to her boyfriend, too, from the sound of it. But the storyline is iconic, and other storytellers have come up with new versions. Most notably, there was X-Men fan Joss Whedon’s “Dark Willow” storyline on “Buffy the Vampire Slayer,” which drew fire for the implication that it was specifically lesbian sex that drove a nice girl into apocalyptic power overload. But, then, sex of some kind is always at the core of these things: Jim Salicrup, an editor of the Saga, noted that one of his inspirations was “The Exorcist,” an openly anti-feminist story in which unearthly evil power is signified by a 12-year-old girl learning to masturbate. And nowadays, when filmmakers tell their own versions of the story, they cast Scarlett Johansson.

What makes Johansson such an appealing canvas for these anxieties? Why has she become the face of scary self-empowerment? To begin with, I suspect, there’s the fact that she is a sex symbol: Male critics drooling over Johansson has become a time-honored tradition, as has women publicly rolling their eyes at the creepiness of those men. These movies are stories about women’s sexual power, as much as anything else: Jean Grey learns to wear a corset, Laura in “Under the Skin” performs a striptease so powerful that it inspires men to drown themselves, Samantha in “Her” goes from cooing monogamy to screwing more than 500 side-pieces. Johansson is so widely desired that it makes her a little scary, mostly because, no matter how much panting attention those men devote to her body, I suspect they know they don’t stand a chance.

Johansson also has a certain opaque quality: In “Lost in Translation,” it registers as depression, and in Marvel films, it registers as duplicity, but in both cases, stillness and reserve are key to her performance. She can certainly act; the eerie, expressionless monotone you see in “Under The Skin” is a choice. But we’re never entirely sure what her characters are thinking. These characters start out blank, without complicated inner lives, and then develop inner lives so complicated we can’t hope to comprehend them: Either way, their thought processes are impenetrable. So, if men are freaked out about what horrible things might occur when women start to use more of our brains, Johansson’s tendency to seem like she knows something we don’t makes it easy for her to intimidate us.

In the end, these are all stories of a woman who destroys the world by empowering herself. These plots are nightmare-logic reactions to feminism, in which “women’s liberation” only liberates women to destroy life as we know it, and in particular, the lives of men. (It’s telling that “Dark Phoenix” and “The Exorcist” both arrived in the 1970s, at the peak of the women’s movement.) Women who become more successful or sexually confident won’t become gods; nor will they bring about the End of Days, though I suspect it might feel that way to some men. Needless to say, there’s very little to fear from the female brain. But, for the moment, Johansson is the culture’s vehicle for those fears — proof that they still exist, and haunt us, regardless of how much we know.

Editor's Picks Her Lucy Scarlett Johansson Under The Skin