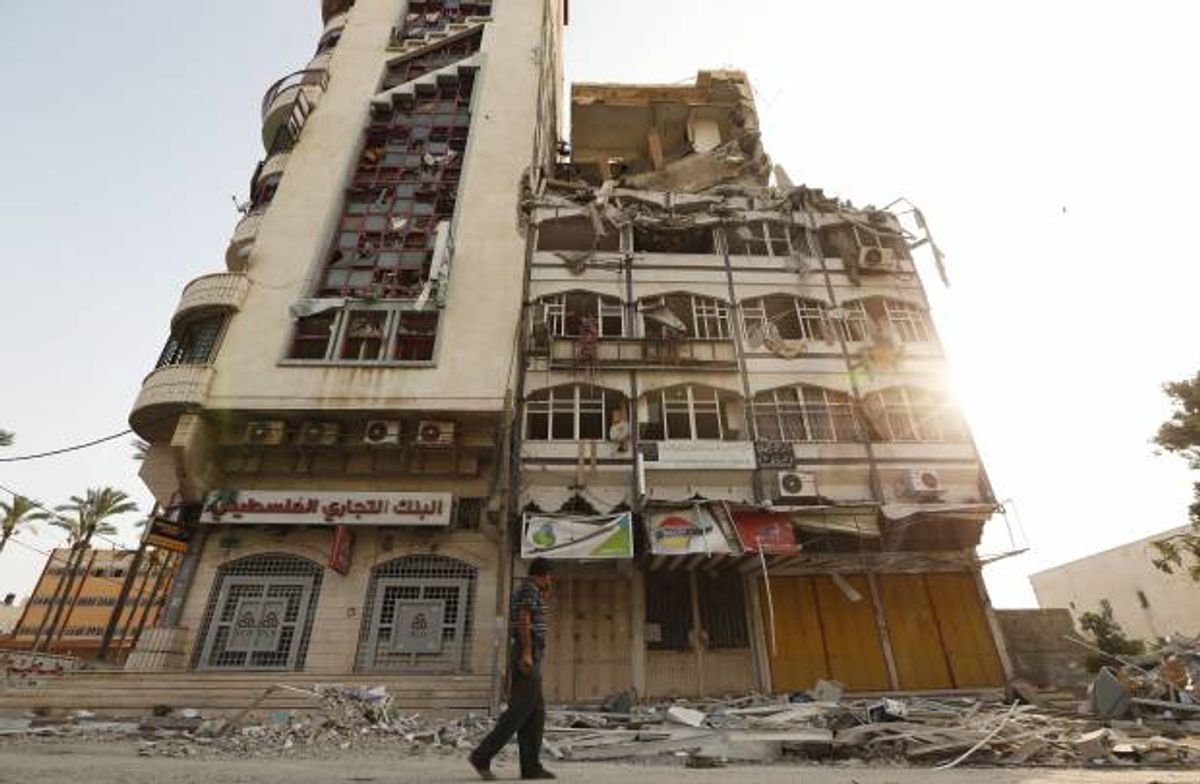 A Palestinian inspects the damage of the Al-Shalam (Peace) tower, destroyed by an overnight Israeli strike. (AP Photo/Lefteris Pitarakis)
--

Speaking at this year's Christians United for Israel gala, Israeli ambassador to the United States Ron Dermer claimed that, contrary to what human rights groups and the United Nations have claimed, the Israeli Defense Force (IDF) has conducted its assault on Hamas in Gaza with such caution and care for civilian lives that it deserves a Nobel Peace Prize for "unimaginable restraint."

"Some are shamelessly accusing Israel of genocide and would put us in the dock for war crimes," Dermer said during a speech that was repeatedly interrupted by protestors. "But the truth is that the Israeli Defense Forces should be given the Nobel Peace Prize … for fighting with unimaginable restraint."

Dermer went on to compare Israel's warfare with that of the United Kingdom during World War II, arguing that while he had no interest in criticizing Winston Churchill for his decision to repeatedly bomb civilians in Germany, the nearly 70-year-old historical example was a reminder that, when it comes to protecting civilian life, Israel could be doing much worse.

"[N]o one should accept criticism of Israel for acting with restraint that has not been shown and would not be shown by any nation on Earth," Dermer continued. "I especially will not tolerate criticism of my country at a time when Israeli soldiers are dying so that innocent Palestinians can live."

After claiming that the IDF was risking Israeli lives in order to protect "innocent Palestinians," Dermer noted that Israel "did not have to send its soldiers into many of the places they are fighting today" and could have instead "bombed from the air all the buildings that were being used by fighters to store and fire weapons" (after giving civilians living in the area a warning).

Dermer went on to rail against human rights organizations and other international bodies that have criticized Israel for its attack on Gaza. "They attack the good. They attack Israel for its legitimate actions of self-defense,” Dermer said, before arguing that these groups and those like them are objectively aiding Hamas by criticizing Israel.

As of this writing, the conflict in Gaza has resulted in well more than 600 casualties, with as many as 630 suffered on the Palestinian side. Estimations are that nearly 4,000 Palestinians have been wounded, and that somewhere between 70 and 80 percent of all Palestinian losses have been civilians. An estimated one-third of these casualties were children under the age of 18.

On the Israeli side, at least 28 soldiers have died in the fighting — the most Israel's suffered since its 2006 war in Lebanon against Hezbollah. Two Israeli civilians have also been killed.