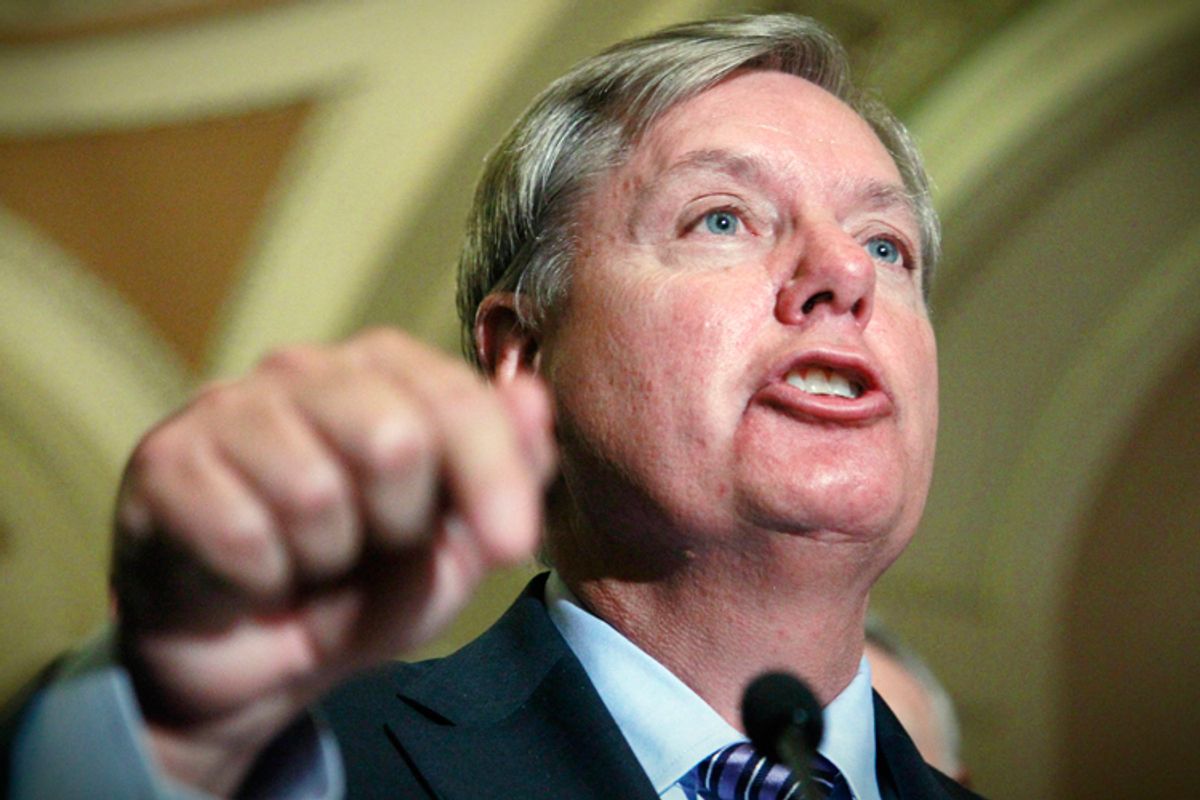 On Sunday's "Meet the Press," Sen. Lindsey Graham, one of Congress' few and most vocal Republican advocates of comprehensive immigration reform, shared the line that he's apparently decided to lean on through the rest of the 2014 election cycle: "There'll be no immigration reform because of the crisis on the border. I blame Obama for this moment."

Graham has a long history of seizing on an issue of possible bipartisan compromise, watching hard-liners in his party kill that possibility, and then abandoning hope of the compromise because Obama didn't manage the "optics" or the schedule or something insignificant. He knows perfectly well that climate change legislation didn't move forward in Obama's first term because the Republican Party conveniently stopped believing in its existence, that nascent immigration reform hopes stalled in Obama's first term because Mitch McConnell's Senate minority staked out a path of total, filibuster-happy obstructionism, and that comprehensive immigration reform legislation died in Obama's second term because the Republican House of Representatives refused to act on it.

He knows these things because they are facts. But hey, he's being a team player ahead of the elections, so sure, it's Obama's fault that House Republicans long ago decided it wasn't in their political interest to pass a CIR bill and conference it with the Senate version and are vaguely using the border crisis as cover.

Graham continued: "But in 2015, if we start over, and the Republican Party doesn't get immigration reform right in 2015 and the House should lead, not the Senate, our chances in 2016 of winning the White House are very low."

There's a slim, slim chance that the House could take up immigration reform in 2015. We'll be in a new election cycle, a presidential election cycle, and perhaps the cold hard practicality of we need to do this to stop Hillary Clinton will be strong enough to overcome the other objections and bring members in line. But those "other objections" -- such as how GOP House members will be just as susceptible to primary challenges in 2016 as they would have been in 2014 -- aren't anything to sneer at. The national Republican Party and members of Congress have different electoral incentives that take them on different courses.

And those courses could clash in another way, just as presidential primary campaigning gets going next year. What will be the Republican reaction to President Obama's presumably forthcoming executive order to defer action on certain deportations? Ron Brownstein, in a smart piece at National Journal, muses on how hot-headed House members could once again act in their interest and thereby against the party's presidential interests:

Such a move would infuriate Republicans, both because the border crisis has deepened their conviction that any move toward legalization inspires more illegal migration and because the president would be bypassing Congress. They would likely challenge an Obama order through both legislation and litigation. Every 2016 GOP presidential contender could feel compelled to promise to repeal the order.

Those would be momentous choices for a party already struggling to attract Hispanics and Asian-Americans. Alfonso Aguilar, executive director of the Latino Partnership initiative at the conservative American Principles Project, warns that if Republicans "again fall for the trap" and try to overturn an Obama legalization plan without offering an alternative path to legal status, the party will condemn itself to another lopsided deficit among Hispanics — and to a likely defeat — in 2016. David Ayon, senior adviser to the polling firm Latino Decisions, says that if Republicans erupt against an Obama legalization initiative, it "could turn the Latino vote as ruggedly anti-Republican as the black vote."

It's a good point that, yes, in another year or so, Republicans will do yet another thing that actively discourages "the Latino vote" from voting for Republican candidates.

But is it even necessary to look that far? The GOP response to the border crisis, the likely GOP response to Obama's immigration directive -- these are all distractions from the seismic event that happened only a few weeks ago and has thus far been relatively successfully dismissed from the press by the GOP: when John Boehner told Obama that the House wouldn't be holding any votes on comprehensive immigration reform this year!

Whatever nitpicks the GOP may have with Obama's executive orders or border legislation before Congress pale in comparison to the abandonment of immigration legislation for pure short-term political gain. Even if House Republicans don't "again fall for the trap" and let Obama's executive order through without much of a formal hissy fit, "another lopsided deficit among Hispanics" for the GOP in 2016 will already be in the pipeline because of when it abandoned comprehensive immigration reform.

Graham's statement on "Meet the Press," translated, is, Okay, House GOP, I'll go along with you for the rest of the year, but next year, you've really got to pass a bill. It's good advice. Because the only thing that begins to get the GOP out of "this trap" is passing comprehensive immigration reform -- not just not suing the president over his impending executive order.