It's the modern-day bread line: Hundreds wait in line for $20 voucher for vegetables -- as cops look on, of course 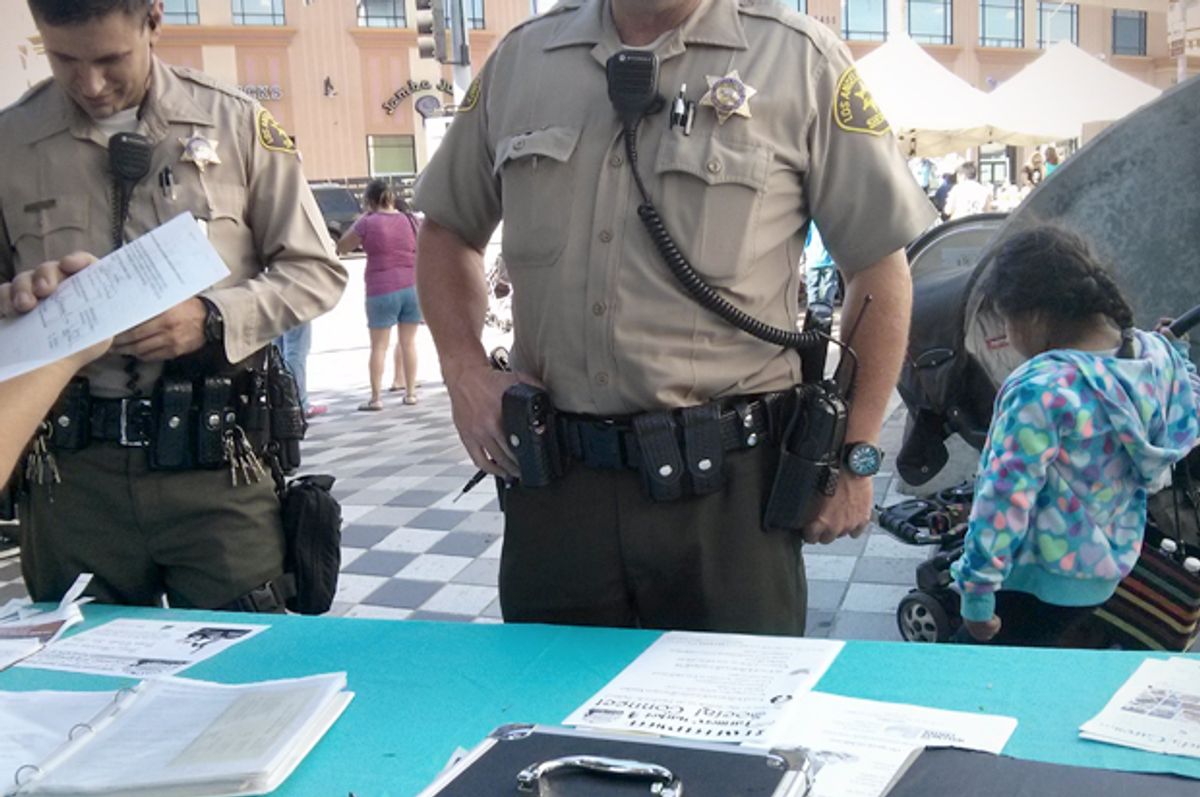 This post originally appeared on the author's web site.

During the Great Depression, poor Americans would line around the block waiting for a bit of bread, photos of which are taken as evidence of just how bad things got during the 1930s. Today, there is still poverty in the United States – about 50 million Americans are poor, according to the official account – but we don’t have breadlines (too much gluten); instead, as I saw Thursday at a farmers’ market in Los Angeles, we have “WIC” lines, in which hundreds of women with young children waited nearly 2 hours for just $20 in vouchers to buy fresh fruit and vegetables.

At first, I thought maybe I’d stumbled across some sort of radio promotion or, this being LA, the taping of some mediocre television. There was a crowd of around 200 people outside the East Hollywood subway station when I got there and the crowd kept growing, a stark sight at 3 in the afternoon, a time when, if people had jobs, they would probably be at them. But jobs are hard to come by these days, particularly in this part of town home to a large number of immigrants from Thailand and the Americas but very few employers – and even fewer willing to offer more than $9 an hour for a retail job.

What I came across was the modern equivalent of the breadline. Minutes after arriving, I noticed there were several women making their way through the crowd wearing bright orange shirts emblazoned with “WIC” on the front; as it turns out, they were setting up a table not to give away a Kia, but to distribute vouchers for the adjacent farmers’ market as part of the federally-funded “Women, Infants and Children Program,” an initiative to provide poor mothers with healthy food. The program has nearly 1.5 million participants in California alone, most of whom appeared to be in East Hollywood that day.

The striking thing about it all, the thing that made me realize yet again that things are much worse than portrayed on the evening news, is that these impoverished women with young children waited in line for hours for just $20. Speaking to one of the women, I learned she had actually been promised $40 in vouchers: $20 from WIC and another $20 from a program called “Market Match,” which had a table right next to the women with orange shirts. Unfortunately, the Market Match program only had $260 to hand out, which meant just 13 out of the hundreds of women who came got the full $40. “Come back next week,” they were told.

About an hour after I arrived, two deputies from the Los Angeles County Sheriff’s Department showed up; someone had called to complain about the sizeable crowd and so the armed wing of the government dutifully came looking to see if the actually-doing-some-good arm of the state had all the proper permits.

“Don’t you actually have any real crime to investigate?” one of the young mothers waiting in the WIC line asked the deputies, who were polite enough – a little apologetic, actually – but certainly not a welcome sight to those who are part of communities that the police traditionally like to harass. The deputies pretended not to hear the question, which was probably for the best (one of the young questioner’s friends told her to quiet down, pointing out she couldn’t take care of her kid if she were in jail).

The proper permits had been obtained, so the police soon left and money for the farmers’ market continued to be handed out. It was encouraging to see some good being done, even if it was only $20 worth of good, and reassuring to see that people actually do want to eat fresh fruits and vegetables – if they can afford them. Of course, the discouraging thing about it all was that any of it was necessary; that women were being forced to wait hours for a paltry amount of money to feed their babies. But such is life for the millions of poor in this, the richest country in the world.