The right apes Osama?! How an attack on Gazans went off the rails 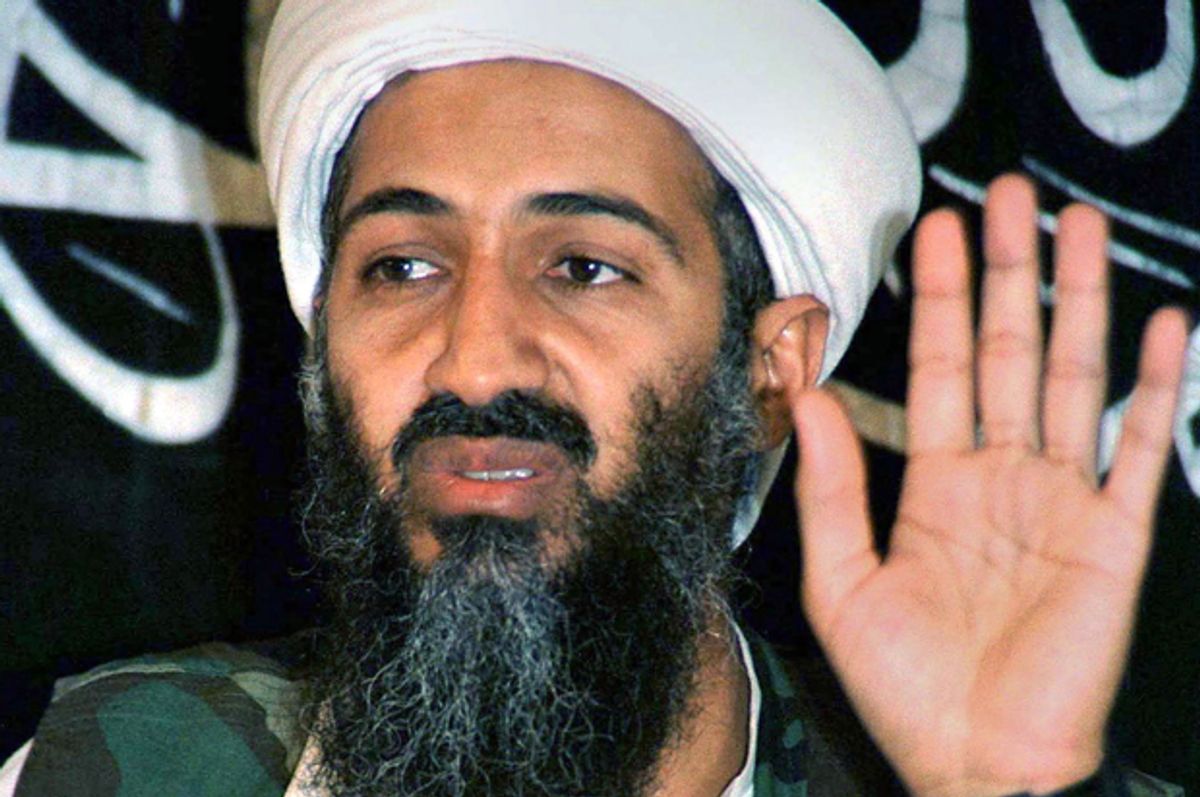 Professor Thane Rosenbaum took to the pages of the Wall Street Journal on Monday to argue that Gazans dying and suffering from Israeli bombardment are not truly innocent civilians in the normal sense of the word. This is because, as Rosenbaum tells it, they support the Hamas government in Gaza, which is militantly opposed to the Israeli occupation. In his effort to wish away the civilian atrocities in Gaza, Rosenbaum has inadvertently made the argument of a terrorist.

About one year after 9/11, Osama bin Laden wrote a letter to America in which he explained, among other things, why it was legitimate to target American civilians in the al-Qaeda attack:

Shortly after the 9/11 attacks, the Rosenbaum-Laden argument for stripping away civilian immunity from military attacks also received support from University of Colorado professor Ward Churchill. In a controversial essay about the attacks, professor Churchill called the victims of the World Trade Center attacks “little Eichmanns” because of their participation in the overarching American imperial machine. The right-wing media exploded into a frenzy over Churchill’s comments and he was eventually fired for them, a professional fate that almost certainly will not befall Professor Rosenbaum despite his essentially identical comments about Gazans.

When people — whether bin Laden, Rosenbaum, Churchill or others — defend slaughtering civilians, they rarely intend to apply their arguments universally. Do you imagine, for instance, that Rosenbaum thinks that it would be legitimate to bomb his house, killing him and his family, because he is a loyal of the American government that fought an unjust war of aggression in Iraq? I suspect not. Do you imagine that he thinks Israeli civilians are legitimate targets of war because they continue to vote for the parties that they do? Again, one suspects not.

People who push the Rosenbaum-Laden argument do not seek to make a serious plea for a new category of quasi-combatant that it is legitimate to brutalize in war. Few if any people are willing to take any such argument to its logical and grisly conclusion. Instead, they seek simply to provide one-off cover to specific instances of civilian killings that they want to justify for other reasons. The “those civilians deserve it” point almost always comes unsheathed as a desperation move when the side you are deeply loyal to has done the indefensible.

None of this is to say that there is no merit to the idea that civilians can affect the military decisions of their governments. Often they can’t, but sometimes they really do. In Spain in 2004, for instance, pre-election polling indicated that the majority of the electorate intended to vote for the incumbent pro-Iraq-war government. But then, shortly after the deadly Madrid train bombings, the electoral tide turned and the socialist anti-Iraq-war party won the government and pulled Spain out of Iraq. It seems, then, that the civilians of Spain possibly could have helped get the country out of the war of aggression in Iraq.

But most people don’t think those bombings were justified, even if they concede that Spanish civilians, through their voting choices, had some control over the unjust military escapades of their government. This is because trying to determine when civilians inherit derivative culpability for the military actions of their government and thus become legitimate targets for military attack is a bloody one-way road to massacres that nobody wants to see. Terrorists and Thane Rosenbaum dabble in that game, but right-thinking people do not.