“The more the dead, the better”: Israel’s crumbling media war

As the world watches in horror at the massacre of Palestinians, Israel’s propaganda war is being challenged 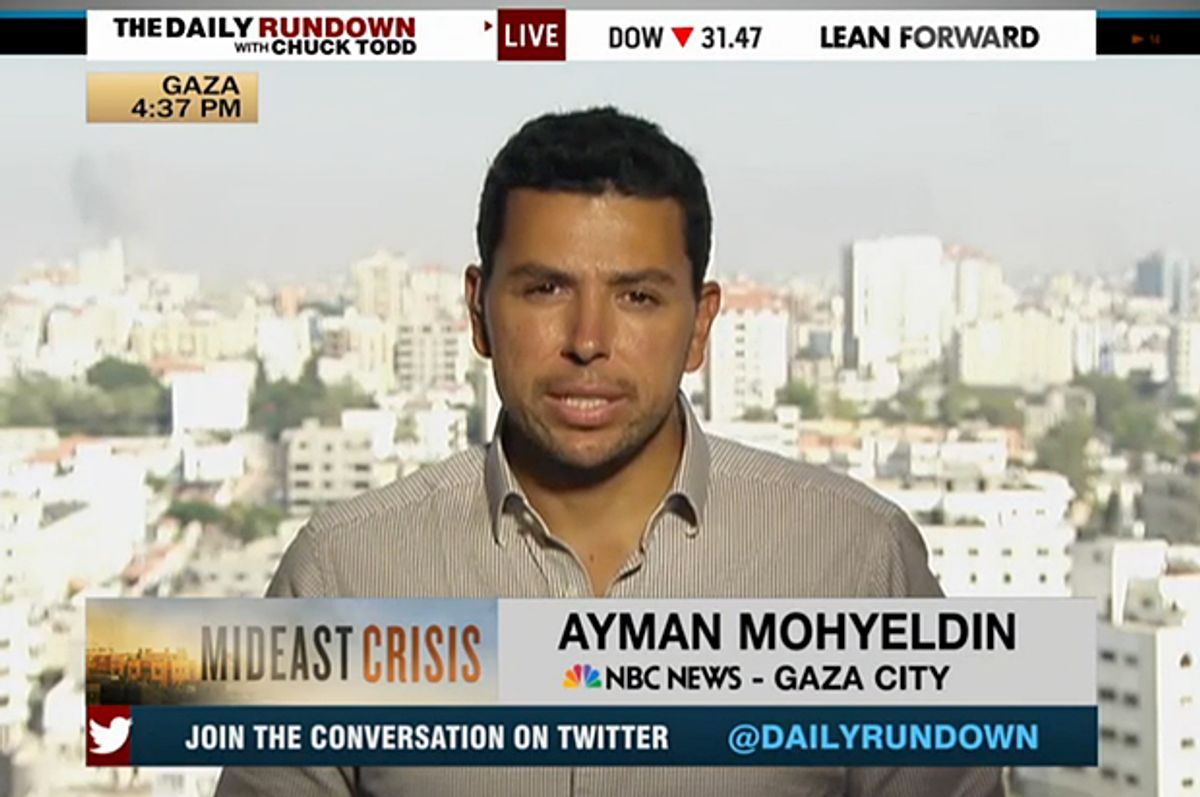 Israeli propaganda has hit a new low. While the world was still trying to come to terms with the mass deaths in Shejaiya, Benjamin Netanyahu went on CNN to state that Hamas uses the “telegenically dead” to further “their cause.” He added that for Hamas: “The more the dead, the better.” Even while Netanyahu followed the propaganda script, which is to first show sympathy and express remorse, by reducing dead Palestinians to a photo-op he showed how his own mind works.

There is a standard script for how to deal with Palestinian casualties. After Israel killed four boys on the Gaza beach on July 16, the U.S. establishment media fell in line behind Israel’s PR framework: acknowledge the tragedy but blame Hamas.  This is exactly what Israeli spokesperson Mark Regev said on Channel 4 News when grilled by the anchor Jon Snow. It is also how the U.S. State Department spokesperson Jen Psaki responded, using the same word-for-word talking points.

This framework, developed in 2009, can be found in The Israel Project’s 2009 Global Language Dictionary. The Orwellian manual provides a detailed outline on how to “communicate effectively in support of Israel.”

One of its first instructions is that pro-Israeli propagandists need to show empathy. The manual insists that they should “show empathy for BOTH sides” (caps in original) as a way of gaining credibility and trust. To make sure that the point is understood, the manual repeats again (in bold, and underlined this time) the instruction “use Empathy”—the suggestion being that empathy is an important tool to be used in the propaganda war.

When innocent Palestinian children and women are killed, the first response should be to show empathy; the next is to reframe the issue stating that Israel is not to blame and that it is only defending itself and further that it only wants peace. Even when it is raining death and destruction on Palestinians, the manual is clear: “Remind people—again and again—that Israel wants peace.”

Developed after the 2008 Gaza war, when Americans began to show greater sympathy for Palestinians, this propaganda manual tries to address some of the shortcomings during Operation Cast Lead. Among the various shifts it suggests, the manual notes that it is important to distinguish between the Palestinian people and Hamas. Ayman Mohyeldin, one of the few international reporters who covered Cast Lead, noted that Israel sought to “portray everyone in Gaza as a Hamas sympathizer, as a terrorist sympathizer” as a way to justify its indiscriminate killing.

The 2009 manual counters this strategy, stating that while Americans “get” that “Hamas is a terrorist organization. . . if it sounds like you are attacking the Palestinian people. . . you will lose support.” It carefully emphasizes again: “Right now, many Americans sympathize with the plight of the Palestinians, and that sympathy will increase if you fail to differentiate between the people from their leaders.”

In other words, in order to decrease sympathy for the Palestinian people new tactics were needed to augment older ones.

Israeli propaganda has a long history. In 1982 the Israeli invasion of Lebanon was met with international condemnation. In particular, the massacre of Palestinians in the refugee camps of Sabra and Shatila damaged its public image. Israel then instituted a permanent PR establishment that would work to cultivate good media coverage in the U.S. The Hasbara project involved training Israeli diplomats and press officers on how to speak in ways that ensured favorable media coverage. The media watchdog group Committee for Accuracy in Middle East Reporting in America (CAMERA) was formed to monitor and respond to “unfair” media coverage of Israel.

But pro-Israeli coverage isn’t simply the product of good talking points; rather it stems from the “special relationship” between the U.S. and Israel and their mutual interests in the Middle East. It is not a coincidence that Psaki would use the same language as Mark Regev. Or that John Kerry would echo Netanyahu.

The U.S. political elite, the elite in Israel and the owners of the corporate media share a set of common economic and political interests that ensures that pro-Israeli propaganda dominates in the establishment media. Should journalists and media organizations break from the script, various pro-Israeli groups, such as CAMERA, generate flack and bring enough pressure to bear on editors and reporters that they are brought back in line.

As Glenn Greenwald noted recently, media figures and executives are more “petrified” of covering Israel than any other issue. Jon Stewart comically made the same point in his segment “We Need to Talk about Israel.”

Cracks in the Propaganda Machine

But something new has been happening in the establishment media, particularly since the July 16 tragedy. Ayman Mohyeldin, now working for NBC, witnessed and covered Israel’s cold-blooded murder of four young Palestinian boys playing soccer on the beach. Mohyeldin’s coverage was gut-wrenching but it was carried by NBC nevertheless.

However, NBC immediately recalled Mohyeldin, giving no explanation for why its best journalist on this topic (Mohyeldin has covered Gaza before, speaks Arabic, and has a good understanding of Middle East politics) might be pulled out of Gaza.

This is standard establishment media protocol. But what happened next is anything but standard.

Following Glenn Greenwald’s article on this at the Intercept, large numbers of people, primarily through social media, held NBC’s feet to the fire. In contrast to standard patterns where the only pressure comes from well-funded pro-Israeli groups, this time ordinary people who were reeling from the Palestinian death toll organized their dissent.

The result was that Mohyeldin was reinstated. He tweeted: “Thanks for all the support. I’m returning to #Gaza to report. Proud of NBC’s continued commitment to cover #Palestinian side of the story."

Similar outrage at ABC’s Diane Sawyer, who misidentified the devastation and suffering of Palestinians as Israeli, prompted a rare apology from the pro-Israel corporate media.

The dynamic at work is as follows: First, independent media have played a crucial role in countering Israeli propaganda and offering alternative accounts. Second, social media have provided a forum from which independent journalism, as well as first-hand reports from Palestinian people in Gaza, are circulated. Third, in these spaces Israel is losing the propaganda war, despite its vast resources of misinformation experts. Fourth, grassroots activists using social media have been able to bring pressure to bear on the establishment media. Fifth, this climate has enabled establishment journalists on the ground to be more forthcoming about the horrors of what is happening in Gaza.

Thus, Tyler Hicks, a photojournalist for the New York Times, who also witnessed the Israeli attack on the beach, was allowed to contribute a story in the Times about his experience. Calling the lie to Israel’s claim that it only bombs Hamas targets, he wrote: “A small metal shack with no electricity or running water on a jetty in the blazing seaside sun does not seem like the kind of place frequented by Hamas militants, the Israel Defense Forces’ intended targets. Children, maybe four feet tall, dressed in summer clothes, running from an explosion, don’t fit the description of Hamas fighters, either.”

At the beach when this tragedy occurred, Hicks asked: “If children are being killed, what is there to protect me, or anyone else?”

Ben Wedeman, CNN’s veteran foreign correspondent, found out first-hand that nothing can protect journalists. He was hit in the head by an Israeli rubber bullet. Following this, he filed a report of a family in Gaza who were evacuating their neighborhood in anticipation of an Israeli attack. The scream of horror and panic of a little girl hearing a missile strike close to her location filled the screens of CNN viewers.

And how can it not? When the actual experience of journalists contradicts the propaganda narrative, if they have a heart or a brain, they cannot help but see Zionist propaganda for what it is. This is possibly why Israel kept out foreign journalists during the 2008 Cast Lead operation.

Another journalist, CNN’s Diana Magnay, hearing the cheers of Israelis as Palestinians were being bombarded, and somewhat horrified by it, said spontaneously on the air—“it is really astonishing, macabre and an awful thing really to watch this display of fire in the air.” As a trained journalist, she seems to have self-censored and substituted the words “fire in the air” for what she actually thought about the people cheering on: “scum,” the word she would later tweet.

Magnay wrote: “Israelis on hill above Sderot cheer as bombs land on #gaza; threaten to ‘destroy our car if I say one word wrong.’ Scum."

Despite the serious intimidation faced by journalists, in this case to bomb Magnay’s car if she got even “a word wrong,” such pressure seems to be working less and less. While Magnay was called away from Gaza by CNN, a vigilant social media sphere combined with mass protests around the world has created a climate where if media institutions are to retain their credibility they have to at least appear to be balanced.

This is the opening that Palestinian rights activists and supporters need to harness in order to reframe the debate. While they lack lobby groups, media watchdog outfits, paid trolls, disinformation experts and the vast financial resources of the Israeli side, they do have one thing going—the truth.

Deepa Kumar is a professor of Media Studies at Rutgers University. She is on Twitter @ProfessorKumar. She is the author, most recently, of Islamophobia and the Politics of Empire. You can follow her work at Deepakumar.net.