"Lucy": The Eurotrash "2001" ScarJo action sequel you've been waiting for 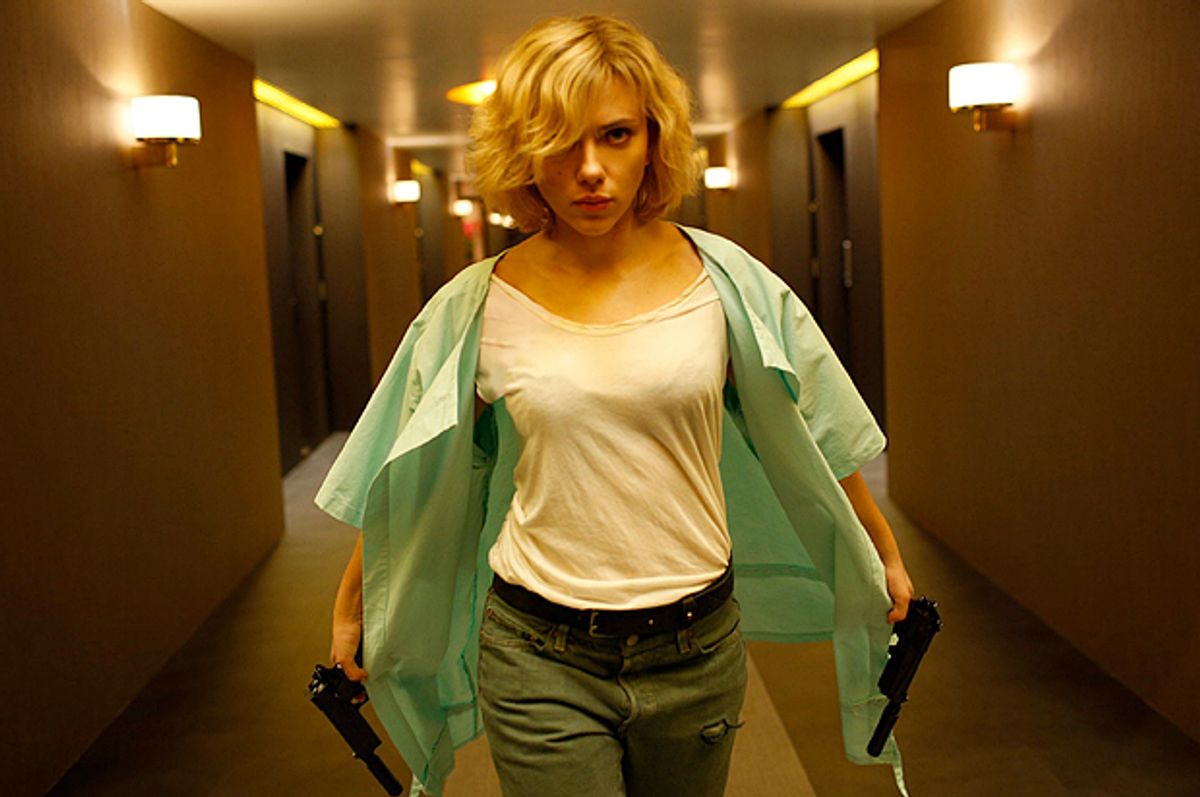 If you’ve always wanted to see “2001: A Space Odyssey” remade as a Eurotrash action film starring Scarlett Johansson, Morgan Freeman and the guy from “Oldboy,” with all the ass-kicking, car chases through Paris and special effects – along with the entire history of the universe, “Tree of Life”-style – packed into 90 minutes, then your ship has come in. Hell, I wanted to see it myself and I’m glad I did, although it seems likely that the net effect of Luc Besson’s “Lucy” is the opposite of the designer drugs that Johansson’s character accidentally ingests in the movie. These super-duper bionic cocaine crystals, in a pleasing shade of electric blue, open up previously unexplored areas of your brain and turn you into a godlike superintelligence, at least if you’re a hard-partying American college student in Taipei. “Lucy,” on the other hand, will make you dumber than you were already.

I could have used some cocaine or coffee or Evian water or any damn thing to get through the nonsensical portions of Besson’s screenplay when Morgan Freeman, playing an Important Brain Scientist, delivers a lecture to a lot of earnest-looking Europeans who nod along with all the gobbledygook he spouts. It’s like a parody of movie-script bad science, in which irrelevant slides about cellular division and evolution cycle behind Freeman’s head while he talks about dolphins and echolocation and how if we could use more of our cerebral capacity we could control our own bodies and then other people’s bodies and then toasters and telephones and finally time and the cosmos. We know all that stuff, Professor Exposition! When is the hot chick with the drugs sewn into her belly just above the lacy underwear gonna start killing people? As a friend observed, “Lucy” completes the 2014 trilogy of dead-eyed Johansson action flicks, after “Under the Skin” and “Captain America: The Winter Soldier.”

Fortunately, the interludes between action scenes are not long in “Lucy,” and soon enough we are watching Johansson’s eponymous character, acid-wired into the info-core of the universe, demonstrating her supremacy by sticking French cops to the floor and Korean gangsters to the ceiling. Whatever you want to say about Besson’s brand of cinema – for example, that he mashes up his favorite kinds of American and Asian gangster flicks, throws in a few rugged-looking Euro guys with shaved heads, and speeds up the tempo – he understands the virtue of forward momentum. “Lucy” may be ridiculous and may revel in that ridiculousness; it’s a movie about a gun-toting bottle-blond drug mule on a mission of vengeance, which also features a time-travel sequence to 19th-century Manhattan (and before that to pre-Columbian America, with natives incongruously riding horses), a vision of our planet’s coming destruction and at least two appearances by that other Lucy, the purported simian ancestress of us all. Hell, it also has rhinos and pigs having sex (although not with each other), footage of volcanoes and typhoons and other forces of natural chaos, and an animated journey through the pain-overloaded neurons of a Korean drug lord’s brain. Does it make sense? Not at all. Is it boring? Not that either.

I’m not kidding about the “2001” references, which run through the movie so obsessively from beginning to end that I’m afraid Besson takes them seriously. I guess you could say there are “Tree of Life” references too – we get the dinosaurs, but not the lyrical Texas DDT haze – but that’s arguably just “2001” delivered by other means. (Whichever Twitter wag has described “Lucy” as the prequel to Spike Jonze’s “Her,” in which Johansson plays an operating system: That’s genius.) How much do you really need to know about the plot? Every Besson movie has pretty much the same plot, which in any case is just a delivery system for bright colors, a restrained and almost puritanical version of sexuality (we see Lucy in her rather prim undies), elaborate shootouts and motor-vehicle choreography. Lucy ends up handcuffed to a briefcase full of the aforementioned designer drugs, and in the possession of Mr. Jang (Choi Min-sik of “Oldboy” and the 2013 Korean hit “New World”), the sort of Asian crime lord whose movie destiny is to inflict and endure great pain. As for Johansson, I know what I’m about to say is a truism, but it’s true: She’s no better than adequate in the early scenes, when Lucy is super-scared and weepy all the time. Once the pouch of superdrugs has been sewed into her belly, and then accidentally burst, Lucy no longer feels fear or pain or desire, and ScarJo’s in her comfort zone.

There are a number of terrific production numbers in “Lucy,” basically violent action scenes that border on slapstick, and as long as we agree in advance that the “science” in this movie goes beyond pseudo into total B.S., I believe you will leave satisfied. I think my favorite is the scene when Super Lucy tracks down Freeman’s character in his Paris hotel room and comes at him through all media, Howard Stern-style: The room phone, his smart phone, the TV, the computer, the clock radio. Apparently the result of her profound insight into the nature of time and existence is to not give a crap about anybody or anything; she inflicts widespread civilian casualties amid the open-air markets of Paris and the Taiwanese healthcare system. She makes out briefly with a hot Parisian cop (Egyptian-born French actor Amr Waked) as a sort of dim reminder of the existence of sex, and then it’s off to drive knives through people’s hands and observe the beginning and end of all things.