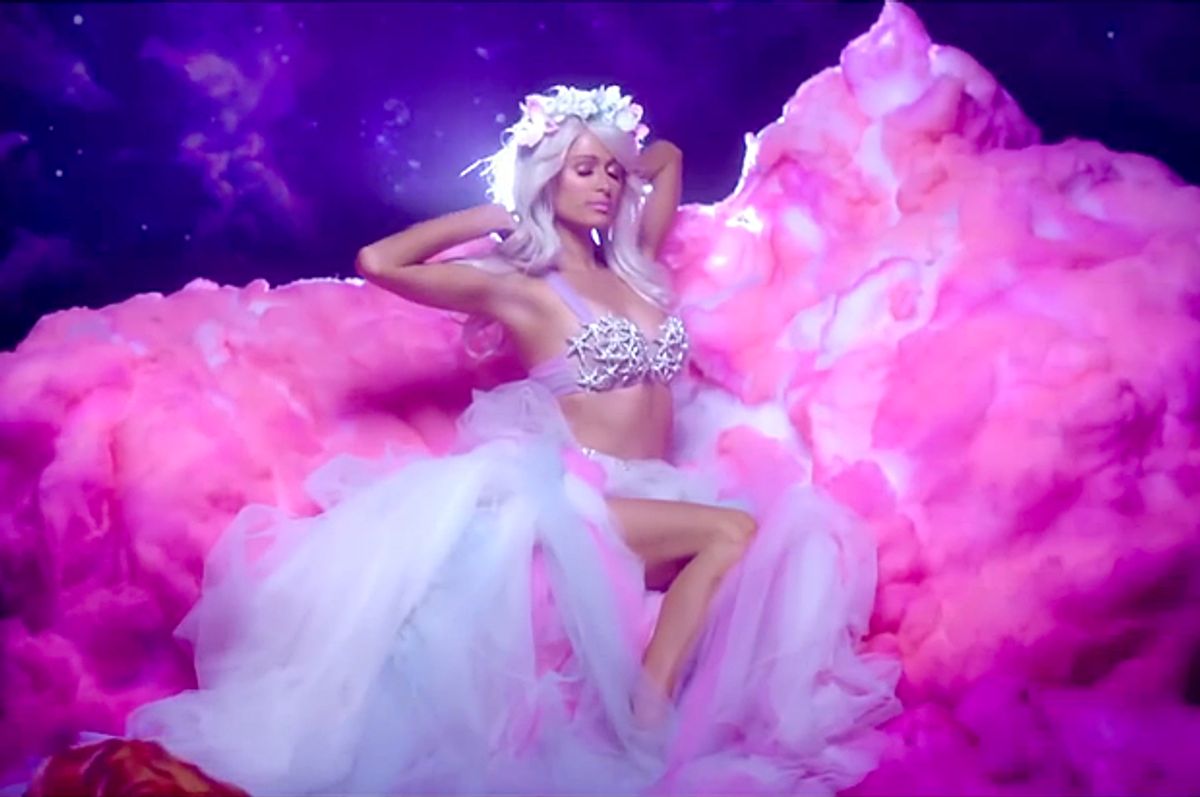 A confession: I have watched the music video for Paris Hilton’s new single “Come Alive” roughly 45 times since its release. For the uninitiated--it features Hilton fluttering through fields in glitzy dresses, sitting on clouds made of cotton candy and hanging with a unicorn under a rainbow. Spliced in between are animations of outer space and time-lapse shots of flowers blooming. The song is about love, or coming alive, or doing drugs, but it doesn't matter, because in none of those 45 views was I listening to the words.

This video was apparently designed to invoke themes of ethereal fantasy a la Shakespeare’s “A Midsummer Night’s Dream." In actuality, it is more reminiscent of a Lisa Frank-themed birthday party. And I’m enchanted by this video in the same way that I might be enchanted by a crop circle or a rusty bucket filled with snakes: It’s not that I actually like it; I just want to know why it exists.

The very fact that there is a music video starring Paris Hilton means that somewhere, somehow, she is still recording songs. Paris Hilton, the woman who at one time staked out a sizable plot of cultural influence by carrying small dogs on red carpets and complaining her way through menial labor alongside Nicole Richie. Paris Hilton, the poster child for trust-fund kids. Paris Hilton, the ur-famous-for-being-famous reality star.

This is the same Paris Hilton who now cranks out vanity singles that are like funhouse-mirror takes on pop hits. Buried within its atonal verses about how "life can get so crazy/our love is so amazin'" is a catchy hook that might in a slightly trippier universe make a good party song. This isn’t her first rodeo: Paris Hilton has technically been a recording artist since 2006 when she put out her first single “Stars Are Blind,” a similar bonanza of bubblegum colors and weird imagery. Last October, she released a music video to her song “Good Time” in which she writhed poolside in a studded bikini for four minutes straight. It was exactly what one might expect from her musical comeback. The song was all about partying, getting a little bit tipsy (“but it’s okay ’cause you’re with me”). Classic Paris, I thought.

But what I find so refreshing about the cotton-candy-filled fantasy world of “Come Alive” is that it's not remotely cool. Ten years ago, if you had asked me if Paris Hilton would release a single, I would have said: I guess, if she gets really bored, sure. If you had asked me if the music video would feature Paris tenderly petting a unicorn, I would have been like: I hope so, but probably not--sounds a little too earnest for the queen of blasé.

Now, if you haven't listened to the song yet, or any of her songs for that matter, perhaps you are asking yourself the obvious question: Is Paris Hilton a good singer? Of course not. It's the same fried baby voice we’ve come to expect, and it’s so auto-tuned that it sounds like she’s singing into a box fan.

And yet this video reveals a side of Paris Hilton that I've been waiting to see, even though I did not quite realize it. It’s got that so-wrong-it’s-right quality. Here, the world’s most infamous party girl doesn't twerk or attempt in any way to savvily infiltrate the zeitgeist, but just warbles her high notes while twirling in a field like a helium-sucking maniac. She wears feathered wings, and her love interest is not an oiled-down Armani model, but rather, once again, a unicorn. Despite the fact that most of her outfits are technically underwear, there is a certain undeniable innocence in “Come Alive.” Instead of merely standing there, lazily putting her hand on her hip and saying "That's so hot," she seems to be doing something new here: trying. And despite my better judgment, it sort of made me like her.