Paul Ryan's poverty sham widens: Why no one should trust his "new" agenda

GOP "wonk" set to reveal new plan to address the needs of the poor. Here's the truth behind these absurd measures 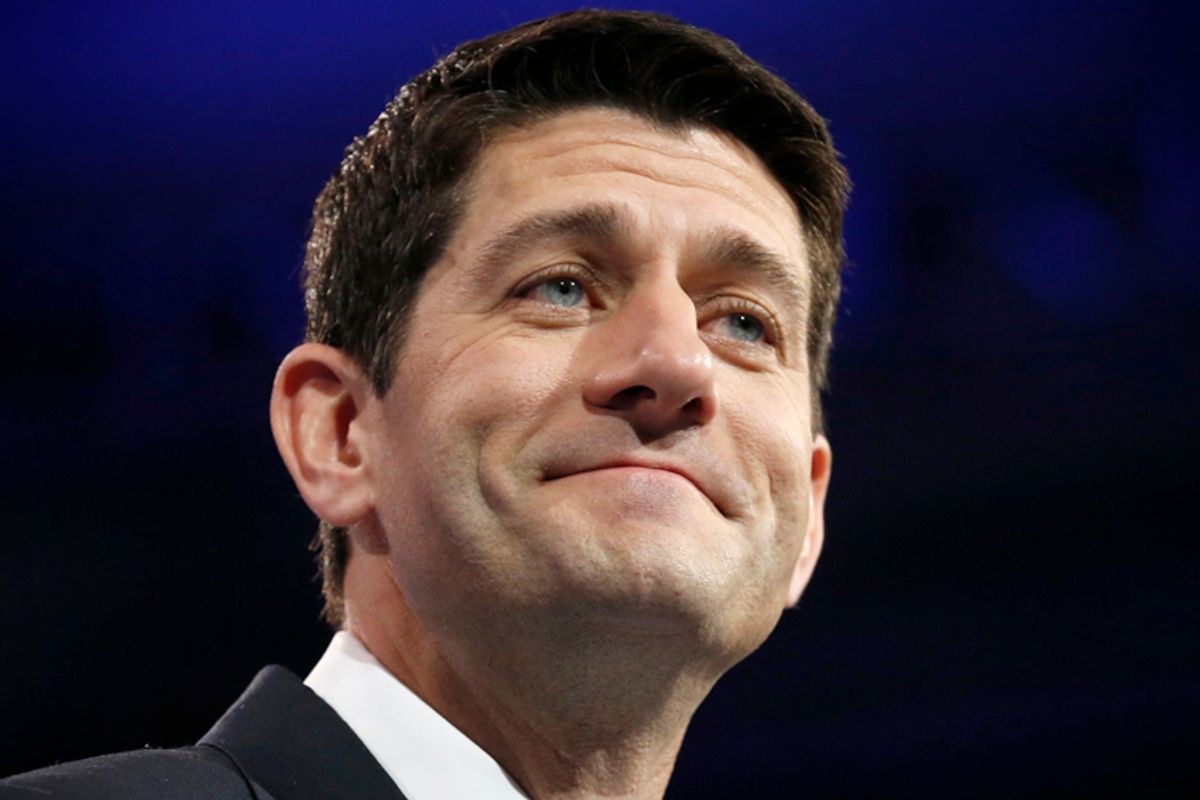 After months and months of listening tours and fawning media profiles, Rep. Paul Ryan is finally ready to unveil his new agenda to fight poverty. The official debut will be tomorrow morning at the American Enterprise Institute, but the Washington Post got a sneak peek at Ryan’s plans, and you’ll never guess what Ryan has in store for the nation’s poverty programs.

Go ahead. Guess. You’ll never get it! Okay actually you’ll probably get it on the first try:

Echoing an idea that has been gaining traction among conservative intellectuals, Ryan will propose a pilot program whereby the federal government consolidates existing safety-net programs into a single grant offered to a state. It would group programs such as food stamps and housing aid, although it would not include Medicaid, the health program for the poor.

Block grants! Converting poverty programs into block grants has been a staple of Paul Ryan’s budget roadmaps for the past few years, which purport to balance the budget through a combination of massive cuts to social programs and magical thinking. The idea behind it is to give the states “more flexibility” in administering the programs by just giving them a lump-sum payment once a year, which will, in theory, reduce costs.

The practical effect of block-granting these programs, however, will be to undermine their basic function as a safety net during times of economic distress. Giving the states a fixed chunk of cash per year wouldn't be as big a problem if economic conditions remained stable throughout the entire year. But, as we all know, there’s no guarantee of that ever happening. Social welfare programs exist to provide much-needed stability during times of economic woe, and converting them to block grants will hamper their ability to do that, as the Congressional Budget Office explains:

Another rationale against this option is that block grants would not be as responsive to economic conditions as the current federal programs are. The automatic changes in spending on benefits under current law help stabilize the economy, reducing the depth of recessions during economic downturns. Those stabilizing effects would be lost under the option.

That’s no small consideration. In 2012 alone, as the economy was slowly hoisting itself out of the gutter, the Supplemental Nutrition Assistance Program (SNAP, or “food stamps”) helped keep 4.9 million people out of poverty. It’s one of the most effective federal anti-poverty programs. Paul Ryan’s proposal would make it less effective.

And we don’t have to rely on guesswork to arrive at that conclusion. The Temporary Assistance for Needy Families program (TANF) was created during the “welfare reform” craze of the mid-’90s and operates under a block grant structure. When the economy crashed during the Great Recession, TANF lagged behind badly in its ability to meet the spike in joblessness, as documented by ThinkProgress’ Bryce Covert:

The block granting system took away TANF’s ability to respond when need goes up. Even though unemployment spiked between 2007 and 2011 thanks to the Great Recession, in nearly a third of states TANF caseloads actually dropped. The rolls didn’t start growing until seven months into the recession and only ever rose 16 percent before beginning a decline in December of 2010, despite the fact that the number of unemployed workers jumped 88 percent over the same time period.

Ryan will also apparently endorse an expansion of the Earned Income Tax Credit, an idea that has the backing of “reform conservatives” and President Obama. The hurdle facing that particular reform is that Republicans in Congress actually want to slash the EITC, partly out of enmity towards the poor, and partly out of reflexive opposition to the president.

We’ll get a better look at what Ryan has in mind tomorrow when he lays out the agenda in more detail, but right now it looks like “poverty warrior” Paul Ryan wants to make it harder for the government to actually fight poverty.