The GOP's new holy land: How libertarianism is changing the face of the Republican Party

Silicon Valley likes to look toward the future. And libertarians like Rand Paul hope it might conceal an ugly past 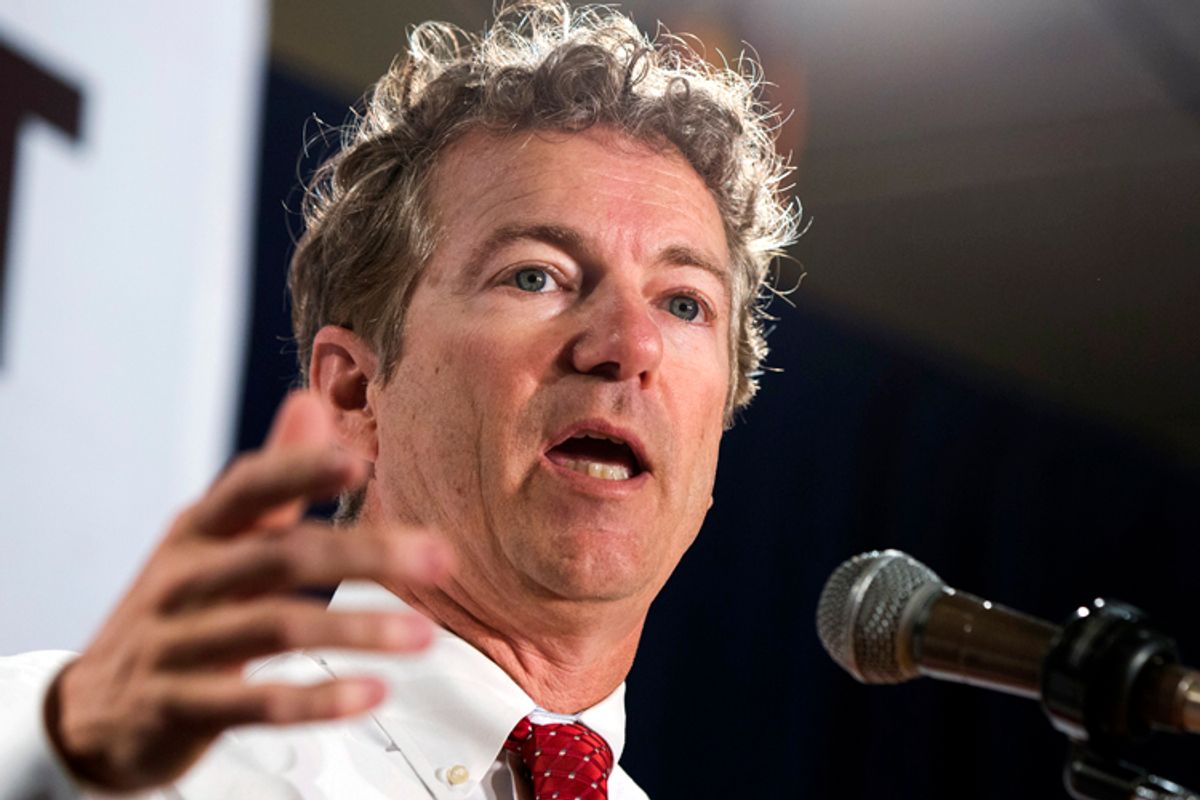 Silicon Valley vanities demand a focus on the future. But the entrepreneurs and code writers attending San Francisco’s Reboot 2014 this week would be wise to note the past of the conference’s Libertarian sponsors as they and other right-wing Republicans are seeking to rebrand the GOP—in California and nationally.

“Reboot is the first conference of its kind to create a community of like-minded individuals determined to bring the cutting edge to campaigns and causes that promote liberty,” its webpage announces, followed by a video featuring ex-Florida Republican Gov. Jeb Bush, who touts the freedom to succeed or fail, as long as government regulation doesn’t get in the way.

Bush, the 2016 presidential prospect seen as the party’s candidate of moderation, is wallpaper compared to the actual conference roster of speakers. There’s Libertarian Rand Paul, the U.S. senator from Kentucky, who is a Republican in name only. There’s Rep. Cathy McMorris Rodgers, chair of the House Republican Conference, who as Pando.com’s Mark Ames noted, is a crusading Christian fundamentalist with a long history of sponsoring homophobic bills and opposing reproductive rights and equal pay for women. Also in a top slot is Nick Gillespie, longtime editor of Reason.com, the Libertarian outlet.

“At first glance it makes no sense to front a rabidly anti-gay candidate like McMorris Rodgers to sell the Kochs’ and the Paul family’s scrubland libertarianism to a Bay Area audience full of hip disruptors and ‘anarchist’ practitioners of bohemia grooming fads,” Ames writes. “But that’s because what Silicon Valley folks think of when they hear the word ‘libertarianism’ actually has very little connection to what the libertarian movement actually stands for, and has stood for since the 1970s.”

Ames, whose lengthy article on tech-centric Pando.com fills in those white supremacist blanks, was not given a press pass to the conference, a very un-Libertarian gesture from a political cadre that claims to be for free thought, free expression and free markets. Oh well, some things just don’t change, especially when an attempt at political rebranding depends on de-emphasizing the past that Ames recounts.

“So now we have the ‘Reboot Lab’ conference taking place in the heart of San Francisco’s SOMA tech district,” he writes. “But if the purpose of the Reboot Lab conference is to merge Koch-brand libertarianism with Silicon Valley 'libertarianism,' then the first thing you have to ask is: Why the hell did they invite a mean homophobic hick like Cathy McMorris Rodgers to the show?”

The rest of the speaker roster answers that question. The Republican Party in California, as it does nationally, has long had two factions that can barely speak to each other. On one side are social conservatives, which is a genteel way of describing born-again Christians who want government to impose their biblical values on everyone. On the other side are free-market conservatives, who, like the conference’s underwriters, the Koch brothers, want to stifle any government regulation that might impede profits. Reboot 2014 is trying to bridge this longtime gap with speakers from both provinces, although the Libertarians dominate.

Rand Paul is there because, like every other presidential candidate, he comes to California to raise money that’s spent elsewhere. There’s a contingent from the California Republican Party, which is hoping an anti-regulatory mantra might help it lose the disastrous legacy it created under former Gov. Pete Wilson, which tried to deny social welfare benefits to undocumented immigrants in the country’s most racially diverse state. And then there’s the national GOP, which is seeking talent, including bankrolling a voter data mining operation based in San Mateo called Data Trust. (The Kochs have underwritten a competing outfit to generate its own voter files for its Tea Party affiliates.)

If you are only looking to the future—such as the 2014 federal elections and 2016 presidential race—it’s easy to ignore where a lot of the leading right-wingers at Reboot 2014 are coming from. Pando.com’s apparent big sin, spiking its press pass access, was resurrecting this legacy. Here’s what Ames says about McMorris Rodgers, who, he writes, will be “sharing the stage with LeanIn.org’s Andrea Saul, whom [Facebook chief operating officer] Sheryl Sandberg hired last year to ‘help reach women—and men—so that we can all work together toward a more equal world.”

“Rep. McMorris Rodgers was homeschooled by her father, and got her higher education degree at an unaccredited Christian fundamentalist institution, Pensacola Christian College (PCC), which bans homosexuality, open Internet (PCC until recentlybanned all Internet access), and mixed-gender stairwells (male and female students are required to use separate stairs and doors).

“Pensacola Christian College is the publisher of A Beka textbooks for K-12 pupils, which teach kids that Islam is a ‘false religion,’ Hindus are ‘incapable of writing history,’ Catholicism is ‘a monstrous distortion of Christianity,’ African religions preach ‘false religious beliefs,’ liberals and Democrats are crypto-Marxists, and the United Nations is a ‘collectivist juggernaut that would crush individual freedom and force the will of an elite few on all of humanity.’

“In the mid-late '90s, McMorris Rodgers took office in the Washington state legislature and co-authored a bill banning same-sex marriages, then later earned notoriety for blocking a bill that had already passed unanimously in Washington state’s upper house to replace the pejorative ‘Orientals’ with ‘Asians’ in official state documents. As reported in the press at the time, legislators were dumbfounded as to why McMorris Rodgers would do something as gratuitously mean-spirited as blocking a bill undoing racism against Asians; a few, including the bill’s Korean-American author, literally broke down in tears.

“McMorris Rodgers’ excuse, as reported in the Seattle Post-Intelligencer: ‘I’m very reluctant to continue to focus on setting up different definitions in statute related to the various minority groups. I’d really like to see us get beyond that.’”

This last example expresses the same worldview U.S. Supreme Court Chief Justice John Roberts cited when gutting the 1965 Voting Rights Act—that America has evolved past the point of racial divisiveness and therefore no affirmative actions in law are needed anymore. Ames points out that the same view—which buttresses the power and influence of institutions dominated by white men—has been a longtime feature of Reason’s coverage. “Throughout the 1970s, Reason’s pages dripped with racist justifications for [South Africa’s] apartheid, on the racial economic theory that whites stood for free market libertarianism and individual liberty, while blacks were genetically predisposed toward socialism and looting.”

One might say, that was then and this is now. But, like too much classic rock-and-roll that never seems to go away, political ideas forged in the crucible of the 1960s and '70s culture wars have a way of sticking around. Ames and other writers on AlterNet have noted that Rand Paul has surrounded himself with top political aides who have espoused the American version of apartheid’s storyline: “neo-Confederates, white supremacists, and conspiracy loons.” And, of course, his father, former Republican Congressman Ron Paul, has long been associated with racist, isolationist publications and stances.

Fast forward to Reboot 2014 and Ames persuasively argues that the conference’s Republican organizers bring a lot of these strains of right-wing belief with them. Moreover, the conference’s “big tent” philosophy seems to be the political equivalent of a startup blender: throw it all in and see what sticks. Ames notes that many of these political ingredients have very different political underpinnings.

“Lincoln Labs, the organizers of the Reboot conference, is run by a young Republican Party activist from Texas named Aaron Ginn, and Ginn has acknowledged that he’s essentially running a talent scouting agency for the talent-starved GOP, which recently set up offices in Silicon Valley.

“Running the GOP operations in Silicon Valley is a former senior Facebook engineering manager named Andrew Barkett, who now works as CTO of the Republican National Committee and partners in a privately held GOP data-mining firm based in San Mateo called Data Trust. Barkett explained [in the New York Times Magazine] how Lincoln Labs helps recruit new GOP foot soldiers: ‘We don’t need thousands of people; we need dozens,’ Mr. Barkett said. ‘We could do a lot of damage with 30 people. A lot. But they’ve got to be real engineers.’

Will the GOP’s organizers and recruiters find their next big thing at Reboot 2014? In the political world, one learns never to say never. But GOP prospecting in Silicon Valley is not exactly new. Sure, Rand Paul may walk away with money for TV ads in Iowa and New Hampshire. The California and House GOP may find new donors too, just as Reason.com may end up with new subscribers and underwriters. But will 30 code writers upend American politics as Barkett bragged to the Times? I don’t think so.

The anti-regulatory prescriptions no doubt appeal to Silicon Valley entrepreneurs who want it all, want it now, and don’t want government in their way. But most of America doesn’t live in Libertarian utopias—like San Francisco’s fancy salons. They are like the rest of California, which is racially diverse, economically struggling, and more ripe for a different populist message, one more geared to working people.

There’s a reason why Republicans have floundered in California. People don’t like to be told by the religious right what to believe and how to live morally, just as they don’t like to be told by millionaires that they have to work harder to reach a new rung on the economic ladder. Libertarians may be making inroads into wealthy Silicon Valley, but they’re still a single-digit Republican Party faction in the rest of America.

Even Reason magazine’s latest national poll found that millennials—said to be the most Libertarian young generation in decades—overwhelmingly plan to vote for Hillary Clinton in 2016.