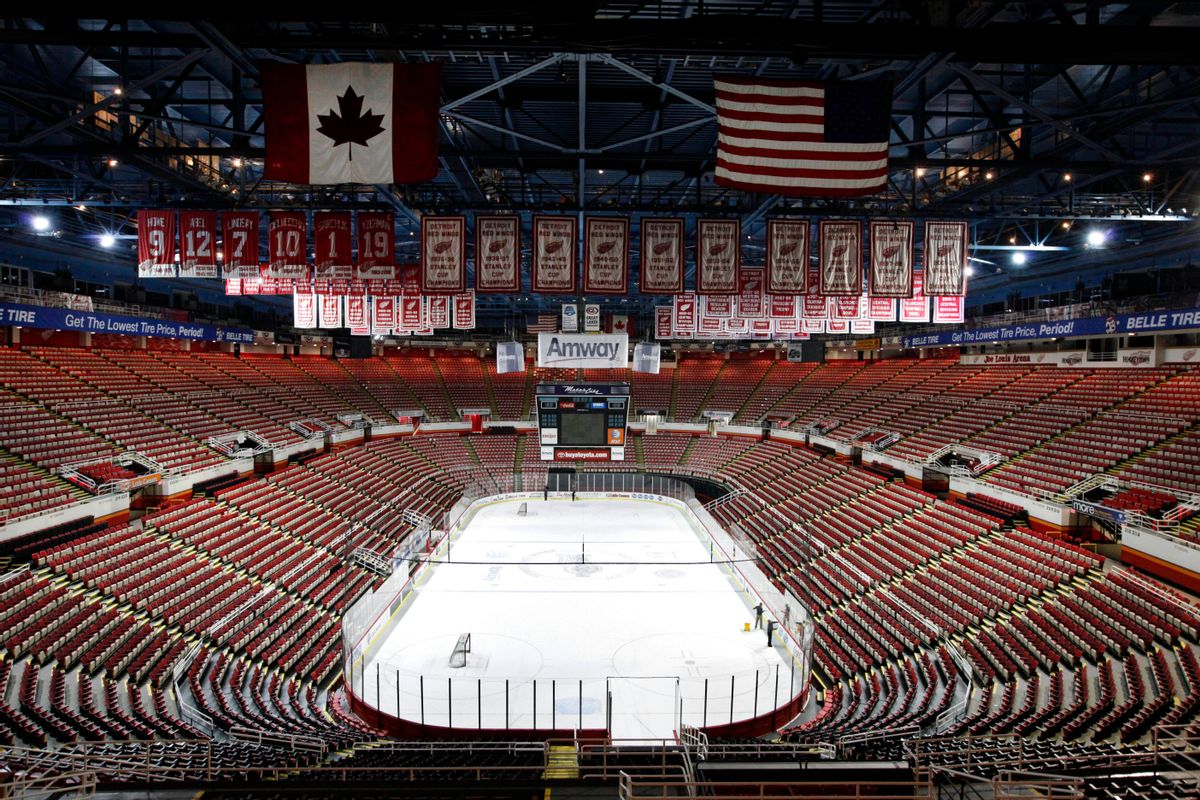 As states and cities grapple with budget shortfalls, many are betting big on an unproven formula: Slash public employee pension benefits and public services while diverting the savings into lucrative subsidies for professional sports teams.

Detroit this week became the most prominent example of this trend. Officials in the financially devastated city announced that their plan to slash public workers' pension benefits will move forward. On the same day, the billionaire owners of the Detroit Red Wings, the Ilitch family, unveiled details of an already approved taxpayer-financed stadium for the professional hockey team.

Many Detroit retirees now face big cuts to their previously negotiated retirement benefits. At the same time, the public is on the hook for $283 million toward the new stadium.

The budget maneuvers in Michigan are part of a larger trend across the country. As Pacific Standard reports, "Over the past 20 years, 101 new sports facilities have opened in the United States — a 90 percent replacement rate — and almost all of them have received direct public funding." Now, many of those subsidies are being effectively financed by the savings accrued from pension benefit reductions and cuts to public services.

In Chicago, for instance, Mayor Rahm Emanuel recently passed a $55 million cut to municipal workers' pensions. At the same time, he has promoted a plan to spend $55 million of taxpayer money on a hotel project that is part of a stadium development plan.

In Miami, Bloomberg News reports that the city "approved a $19 million subsidy for (a) professional basketball arena" and then, six weeks later, "began considering a plan to cut as many as 700 (librarian) positions, including a fifth of the library staff and more than 300 police."

In Arizona, the Phoenix Business Journal reports that regional governments in that state have spent $1.5 billion "on sports stadiums, arenas and pro teams" since the mid-1990s. Meanwhile, legislators are considering proposals to cut public pension benefits.

In New Jersey, Gov. Chris Christie is blocking a planned $2.4 billion payment to the pension system, at the same time his administration has spent a record $4 billion on subsidies and tax breaks to corporations. That includes an $82 million subsidy for a practice facility for the Philadelphia 76ers.

In a 2008 data review by University of Maryland and University of Alberta, researchers found that "sports subsidies cannot be justified on the grounds of local economic development." In addition, a 2012 Bloomberg News analysis found that taxpayers have lost $4 billion on such subsidies since the mid-1980s.

"Sports stadiums typically aren't a good tool for economic development," said Holy Cross economist Victor Matheson in an interview with The Atlantic. "Take whatever number the sports promoter says, take it and move the decimal one place to the left. Divide it by ten, and that's a pretty good estimate of the actual economic impact."

Of course, while stadium subsidies are promoted in the name of economic development, pension benefits are rarely described in such terms - even though the data suggests they should be. Indeed, an analysis by the Washington, D.C.-based National Institute on Retirement Security notes that spending resulting from pension payments had "a total economic impact of more than $941.2 billion" and "supported more than 6.1 million American jobs" in 2012.

Despite that, retirement benefits are often the first item on politicians' chopping blocks. Pensions, after all, may support local economies, but they don't result in shiny new stadiums.

In a sports-obsessed country, that makes those pensions a much bigger political target than any taxpayer handout to a billionaire team owner.