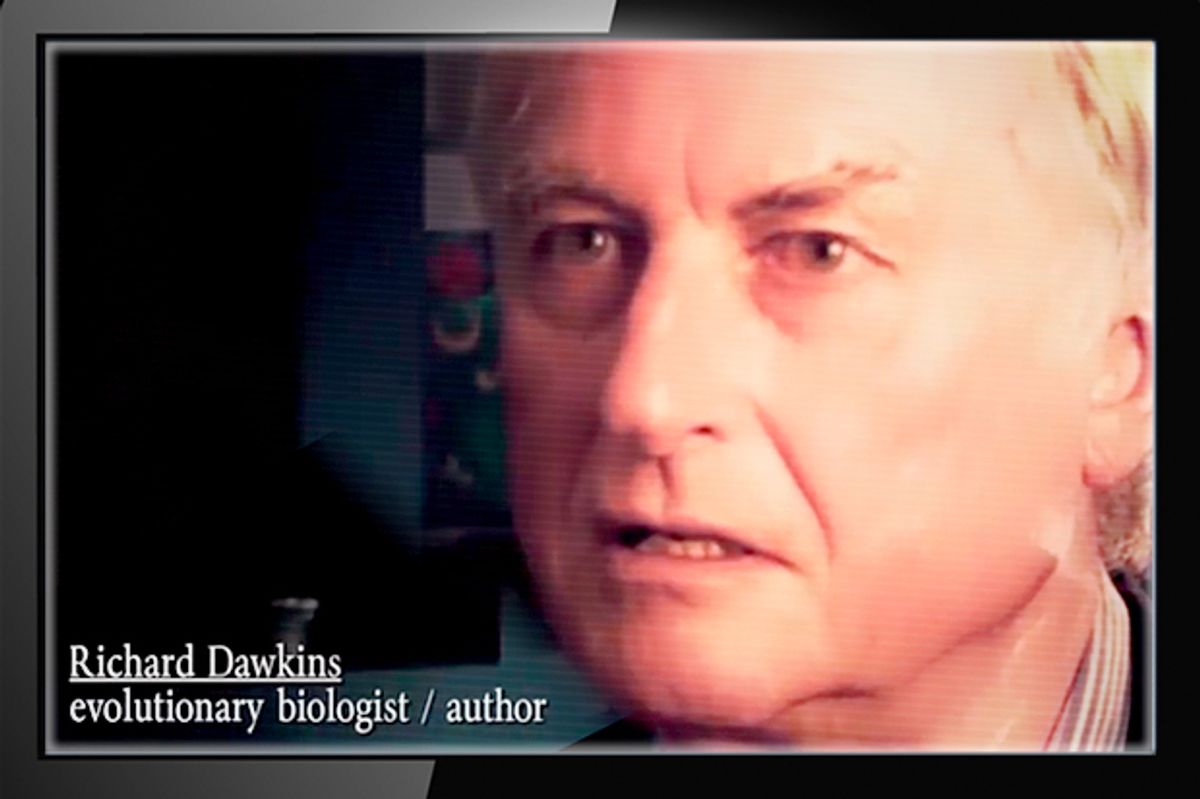 Richard Dawkins in a promo for Atheist TV (YouTube/American Atheists)
--

Are you ready for all godlessness, all the time? Next week, the first atheist TV network is launching. The network will be available free to subscribers on the streaming service Roku starting July 29.

In announcing the venture back in May, American Atheists president David Silverman observed, "From televangelists to Christmas specials, there is a plethora of religious TV programming to choose from. With Atheist TV, we’re filling a void: There are a lot of atheists and closeted atheists who are curious and want more. We have it, and the next step is bringing it to them." It's true, television does not lack for the Christian perspective; a little more from other ideologies should in theory be a welcome change. The network promises "atheist video content — from firebrand speeches, to stand-up comedy, to documentaries, to real science-based educational programming, and more … consistent, quality, superstition-free programming for children and adults."

I am for having as many different voices and ideas out there as possible. And there's no question that a network that is honest about its point of view is vastly ethically preferable to one that peddles an agenda in the guise of being "fair and balanced." I strongly believe that we need to continue to move toward tolerance for a variety of beliefs and non-beliefs, and that it's ridiculous that in 2014 there's still so much mistrust and misunderstanding toward atheists and agnostics. We have a long, long way to go, America, toward fostering respectful, intellectually curious conversation. But I would also suggest that if you want to launch a television venture, you are going to, at some point, actually be enjoyable. Take, for example, Neil deGrasse Tyson's "Cosmos," which was smart and skeptical and successful, and, as a bonus, delightfully made creationists have a cow.

But Atheist TV so far looks a little, well, dry. Writing in the Telegraph, Peter Foster calls the nearly three-minute trailer for the network "bombastic," and I think he's being far too kind. There is no mention of what the content itself will be, just clips of prominent atheists and quotes about secularism. And if you want to feature a woman saying, "A lot of people, when they talk about atheism, they see it as such a negative thing, but I view it as very positive," it doesn't really sell that idea when there's super-scary music playing underneath. The melody swells as fireworks explode. Atheism! Now it's going to be in your house! DUN DUN DUN!

The network is also clearly aiming to take a page from the LGBT community, liberally using the terminology of "coming out" being "fully who we are." Yes, but LogoTV is fun. Even the Christian Broadcasting has cartoons, and Christian Television Network has a music show. Where's the atheist game show, "Name That Free Thinker"? Where's the buddy cop show about two secularists solving crimes using rigorously non-abstract concepts? Where's the travel show, "America's Best Godless Sodoms"? Atheist TV so far just promises a "righteous fight" and what I imagine will be every clip of Richard Dawkins in existence. That sounds ominous. Worse -- it sounds boring. There's a difference between ideology and entertainment, and you can't build a brand only on what you stand in opposition to. Once the novelty of an all-atheist network wears off, the only question that matters will be, does it offer anything anybody will really want to believe in?