"Magic in the Moonlight": It's time to stop making excuses for Woody Allen 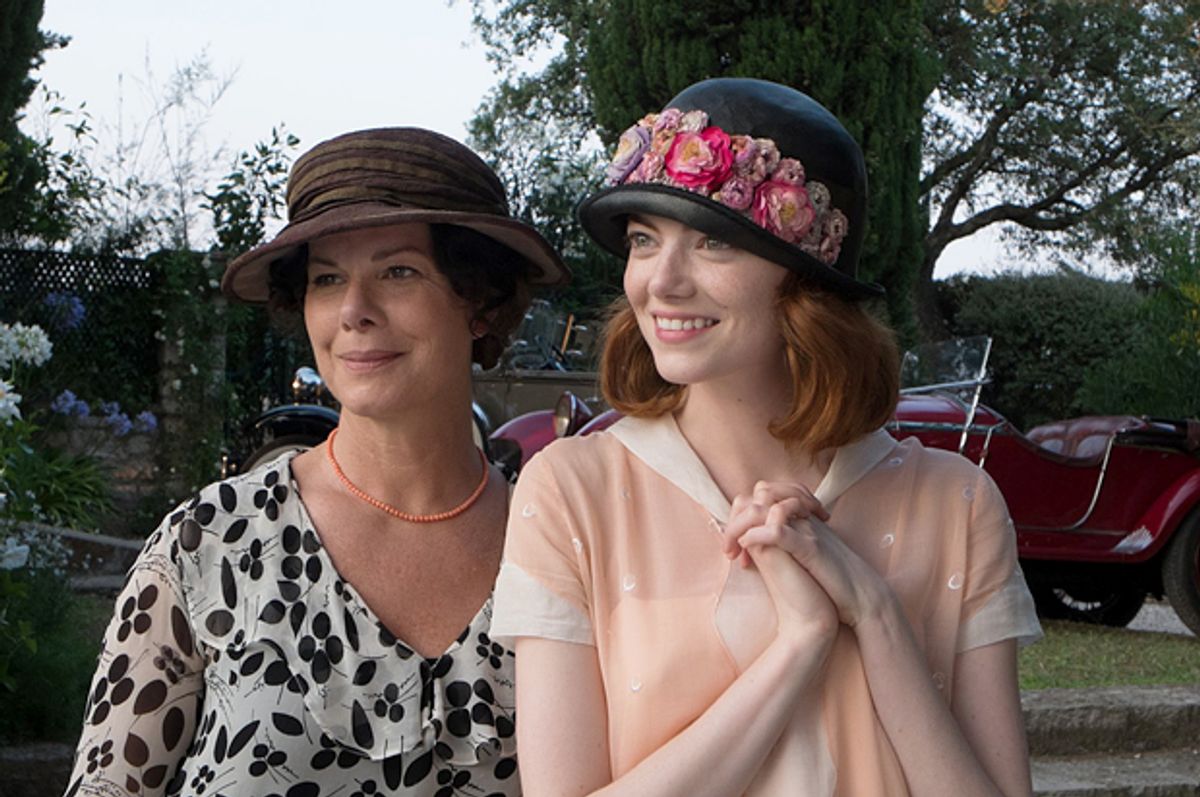 Marcia Gay Harden and Emma Stone in "Magic in the Moonlight"
--

Can we all stop making excuses for Woody Allen now? I’m not talking about the twists and turns of his personal life, or the allegations that he abused his daughter decades ago. I don’t know what happened between Allen and Dylan Farrow and neither do you, and we’ve all spent too much time discussing it. I’m talking about Allen’s increasingly bizarre and disconnected films of the last 15 years or so, which appear to have been made by a visitor from another planet who has heard human beings described (to use an old gag) but never actually encountered any.

Allen still has an avid posse of fans and defenders who close ranks around these feeble, stilted vanity productions for reasons I only partly understand: Because of his long-ago track record or because he can hypnotize movie stars or because in his own strange way he’s extremely well connected. Who knows? I’m not disputing Allen’s importance in the history of American cinema; he had a remarkable run from the mid-1970s to the early ‘90s, and captured a cultural moment in the life of the New York-centric liberal intelligentsia. But that moment is a long time gone. I suppose in the most sympathetic possible reading you can detect wraithlike hints or echoes of Allen’s earlier work even in the most painfully artificial of his globetrotting films, and I get that for some people he represents congenial entertainment for literate adults, a niche that seems to be disappearing in today’s pop-culture economy. Inept and misanthropic as they may be, Allen’s recent comedies do not feature giant robots or motor-vehicle explosions. Whether that’s a decisive point in their favor is up to you.

None of that excuses the fact that the Allen posse succeeded in giving an Oscar to Cate Blanchett for her twitchy, overwrought Blanche DuBois impression in a ludicrous melodrama that demonstrated that Allen is either so far gone or so isolated from reality that he can’t detect any difference between San Francisco and the working-class suburbs of New Jersey. Blanchett worked really hard in that dreadful role and battled Allen’s script almost to a draw; maybe the academy voters just felt empathy for her struggle. For a dramatist whose stock in trade, once upon a time, was to probe the neuroses of upper-middle-class Jewish New Yorkers with scientific precision, Allen’s WTF tourist-board movies of the last decade or so, in which one world city after another is inserted as the most superficial signifier, are nothing short of a crushing embarrassment. If Woody Allen had set out to destroy his own legacy on purpose, to punish those of us who put too much faith in him way back when, he couldn’t have done a better job.

Some of Allen’s recent films can be granted allowances in various ways, or at least are cannily packaged to paper over their most glaring weaknesses. “Blue Jasmine” was overwhelmed by Blanchett’s scenery chewing; “Midnight in Paris” featured a series of audience-flattering literary gags, dopey as they were; “Vicky Cristina Barcelona” was a little risqué and gleefully anti-American. But it’s difficult to find any ground from which to defend Allen’s alternately tedious, offensive and incompetent new romantic comedy “Magic in the Moonlight,” unless it’s the exquisite 1920s wardrobes. Allen airs out a number of familiar themes here, including his quasi-metaphorical interest in stage magic, his rejection of the spiritual or supernatural in all forms (with the concomitant conclusion that life has no meaning) and – not to put too fine a point on it – his hankering after much younger women. To be clear: Colin Firth and Emma Stone are both attractive adult humans, and if they want to play a couple on-screen (or if they want to hook up in real life, for that matter) it isn’t my business or anybody else’s. In fact, Firth and Stone never seem quite comfortable in “Magic in the Moonlight,” which may have more to do with the bad script and pointless, obvious plot than with their three-decade age difference. Anyway, it’s not any particular instance that’s the problem. It’s the obsessive persistence of the April-October love affair as the apex of Eros in Allen’s work, from at least “Manhattan” in 1979 right through the present, which feels pathological.

Firth plays the obvious Allen surrogate, a prickly and repressed English stage magician of the 1920s named Stanley Crawford, who performs in yellowface as the “Oriental mystic” Wei Ling Soo, an unfortunately accurate historical phenomenon. Stanley runs a side business in debunking mediums and spiritualists of all stripes, who were certainly widespread at the time. A friend and longtime rival (Simon McBurney) has summoned Stanley to confront Sophie Baker (Stone), a wide-eyed American flapper type whose alleged clairvoyant gifts are focused on a wealthy Yank family and their luxurious Côte d’Azur estate. From that description, you could pretty much write the movie yourself, and it wouldn’t necessarily be any worse than the one we see. Despite his embittered monologues about the emptiness and meaninglessness of the universe – delivered, for purported ironic effect, against some of the planet’s more glorious scenery – Stanley yearns to believe in something, or in almost anything. For her part, Sophie turns out to be curiously difficult to unmask, and to promise romantic possibilities the nattily attired Anglo sourpuss has never considered.

Every so-called plot twist is telegraphed in advance, the chemistry between Stone and Firth is negligible (although they both look terrific in period evening wear), and the cast of fine actors around them is arranged as types rather than individuals: Hamish Linklater as the insipid rich boy in love with Sophie, Jacki Weaver as the credulous old biddy, Eileen Atkins (bringing a hint of life to the dismal proceedings) as Stanley’s onetime bohemian aunt. But those things, even the zero-wattage romance, aren’t as fatal as the first-draft quality of the script and the lethargy of the direction. Even in Sophie and Stanley’s scenes together, they appear to be strangers who have just met and are flinging bons mots at each other without listening for signs of life from the other party. There’s considerable pontification in “Magic in the Moonlight,” but no conversation; characters state their positions and click the plot forward mechanically from one scene to the next, without any sense of experience or change. It’s like the work of a bright high-school student who’s been dazzled by Noël Coward’s dialogue, and is finding out it’s not as easy as it looks.

Cinematographer Darius Khondji delivers the requisite pretty pictures of the Provençal countryside, and captures the two principals handsomely enough: Stone with her enormous eyes, slender form and unaffected American-girl demeanor; Firth with his manner of leonine Imperial grandeur run slightly to seed. Maybe that pictorial pleasantness will distract summer moviegoers from the fact that shot-to-shot transitions are often awkward, dialogue scenes are forced and poorly staged and that even by rom-com standards the obstacles created to keep Sophie and Stanley apart until a respectable running time has elapsed are idiotic. All the same, you can feel a peculiar pungency behind Stanley’s supposed struggle with faith, his desperate longing to believe. That desperation is real, even if the story around it is barely there, but it isn’t about God or the spirit world or life after death. It’s an artist’s yearning for the Prospero-like magical powers he once had, the powers he keeps on trying to conjure up again out of nothingness.