The NFL has suspended Baltimore Ravens running back Ray Rice for two games. Smoking pot will get you four games 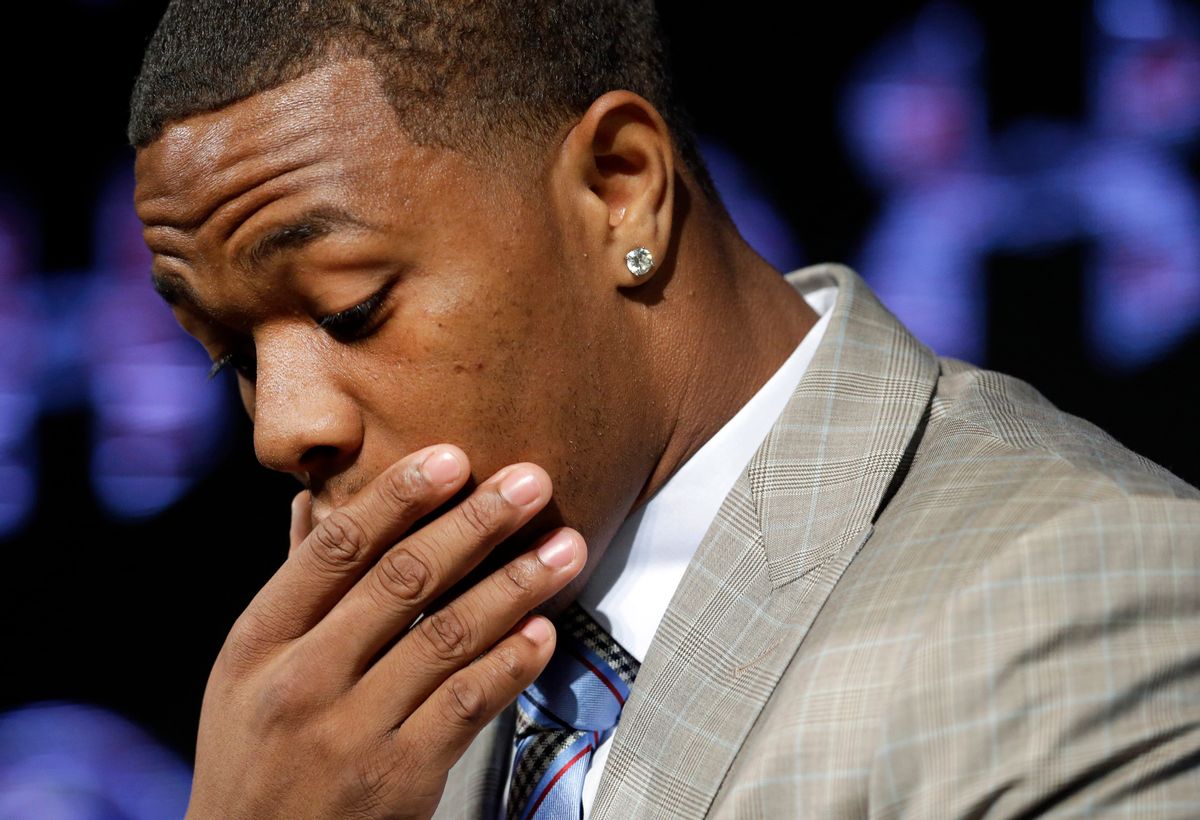 According to a report from Adam Schefter at ESPN, the NFL has suspended Baltimore Ravens running back Ray Rice for two games this season. Earlier this year, Rice was charged with felony aggravated assault after he was filmed dragging the body of his then-fiancée (now wife) Janay Palmer from an elevator after allegedly striking her unconscious. After pleading not guilty, Rice was admitted into a pre-trial diversionary rehabilitation program that will allow him to avoid jail time, and may result in his having the aggravated assault charges dismissed.

The Ravens have aggressively supported Rice throughout the case. The week after the footage was released to the press -- the same week that police reported they had additional footage of Rice violently assaulting Palmer -- Ravens coach John Harbaugh said he had not "seen anything that would remotely make me think that [Rice wouldn't remain with the Ravens].”

Team owner Steve Bisciotti was equally committed to Rice's return. "He’ll be back with the team," he said earlier this year. "He’ll definitely be back.”

With the exception of two games, it seems.

While the NFL appears to be quite comfortable letting an alleged domestic abuser back on the field (the league has certainly done it before), there are a few offenses that will put you out for longer than two days.

If you drive without a license, you're going to sit out for three games.

If you are caught with a blunt in your car, you'll warm the bench for four games. (Not so when you're arrested for domestic violence.)

If you stomp on another player's head (while that player is on the ground and not wearing a helmet), you will be suspended for five games.

If you are a racist, homophobic and misogynistic bully, you will be suspended for three months. (Then you may have to cool your heels as a "free agent" until the public forgets that you're a bigot.)

If you have a problem with gambling, you're out for an entire year.

If you fail four drug tests, you can expect to be banned for life.

But maybe, you might be asking yourself, Rice is only facing a two-game suspension because he was charged but never convicted of aggravated assault? Except that under the NFL's personal-conduct policy, players are held to a "higher standard," and a conviction isn't necessary to mete out punishment:

It is not enough simply to avoid being found guilty of a crime. Instead, as an employee of the NFL or a member club, you are held to a higher standard and expected to conduct yourself in a way that is responsible, promotes the values upon which the League is based, and is lawful.

Persons who fail to live up to this standard of conduct are guilty of conduct detrimental and subject to discipline, even where the conduct itself does not result in conviction of a crime.

Except, I guess, when you violently assault a woman. Which, I guess, happens a lot in the NFL.

What the Ravens have in their hands is a video of a man allegedly violently assaulting his partner and then dragging her lifeless body out of an elevator. They have a man on their team who was indicted by a grand jury for "attempting to cause significant bodily injury, and/or purposely or knowing causing such injury, and/or recklessly causing such injury under extreme indifference to the value of human life.” That man is wearing their uniform. That man is playing on their field.

Well, except for two games.

The NFL has a violence against women problem. We already know that. What we don't know is when it will finally do something about it.