Paul Ryan's "insult" strategy: Why his anti-poverty contract is so grotesque

Paul Ryan wants to make the poor sign contracts to earn benefits, and punish them for not being successful 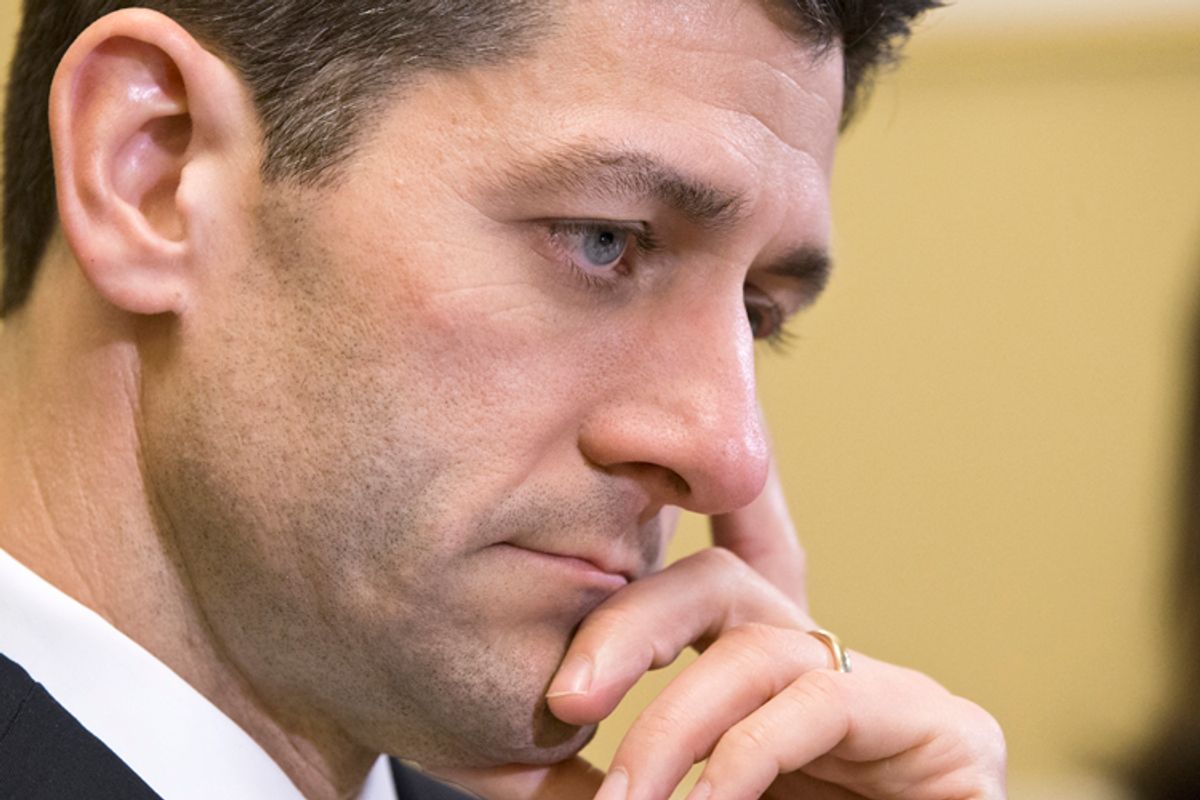 The good news in Paul Ryan’s newly released anti-poverty proposal is that, for the first time in as long as anyone can remember, Ryan is not advocating the wholesale destruction of the social safety net. His past budgets – including the most recent – have envisioned catastrophic cuts to social programs all in the service of boosting military spending and alleviating the tax burden on the wealthy. At least for now, he’s transitioned from “destroy the safety net” to “grudgingly accept its continued existence.” So hooray for progress!

The bad news is that Paul Ryan’s view of that safety net is still largely detached from reality. Also, his approach to curing poverty seems to be to treat the poor in as paternalistic and insulting a way as possible by proposing that they sign “contracts” to remain eligible for public assistance.

For real. “Contracts.” Under Ryan’s proposal, all the funding for a dozen or so federal poverty programs, like SNAP and housing assistance, would be consolidated into a single grant for the states – an “opportunity grant,” as Ryan calls it, in a fairly obvious message-tested attempt to move away from the term “block grant.” The organizations within the states tasked with dispensing benefits would “work with families to design a customized life plan to provide a structured roadmap out of poverty.” One of the requirements under this scenario is “a contract outlining specific and measurable benchmarks for success,” complete with “sanctions for breaking the terms of the contract.”

Sanctions! Under the Paul Ryan poverty plan, the poor = Iran.

Ryan’s proposal doesn’t get into what those “sanctions” might look like, but the precise nature of the punitive measures is beside the real point that Ryan has put forward a system in which the government punishes the poor for not being successful enough. He’s also proposed extending work requirements to every program folded into the “opportunity grant.” So, in effect, his solution to curing poverty entails erecting barriers to accessing the programs that help people out of poverty. That sound you hear is compassionate conservatism’s death rattle.

The entire document is premised on the notion that the poor are poor largely because they lack sufficient incentive to improve their station in life. Blame for this is, of course, foisted upon the government programs themselves. “The biggest snag in the safety net is that it discourages work,” Ryan’s document observes. “Many federal programs are means-tested, so as families earn more money, they get less aid. Any system that concentrates on the most vulnerable will face this tension.”

If that’s “the biggest snag,” then the safety net is doing pretty well. Ryan and the GOP have been pushing this argument that government benefits breed complacency among their recipients for quite some time, but the evidence just isn’t there to back it up. Here’s what Paul Krugman wrote in response to Ryan’s report from earlier this year attacking Lyndon Johnson’s War on Poverty:

What does scholarly research on antipoverty programs actually say? We have quite good evidence on the effects of food stamps and Medicaid, which draw most of Mr. Ryan’s ire – and which his budgets propose slashing drastically. Food stamps, it seems, do lead to a reduction in work and working hours, but the effect is modest. Medicaid has little, if any, effect on work effort.

Over all, here’s the verdict of one comprehensive survey: “While there are significant behavioral side effects of many programs, their aggregate impact is very small.” In short, Mr. Ryan’s poverty report, like his famous budget plan, is a con job.

You can even look at recent policy choices to see how this claim that government benefits discourage work just doesn’t pan out. The Republicans filibustered an extension of unemployment benefits for the long-term unemployed late last year, claiming that cutting off the benefits would incentivize them to find jobs. The exact opposite happened – instead of finding jobs, the long-term unemployed just gave up looking. The benefits -- which could be collected only if the recipient was actively looking for work -- were the only thing keeping them in the job market.

Ryan’s other big idea is to expand the Earned Income Tax Credit, a policy proposal that actually has some significant bipartisan support. Where Ryan differs from the Democrats is that, true to the (R) next to his name, he won’t tolerate any increase in revenues to pay for it. Instead, he proposes eliminating “a number of ineffective programs” that provide assistance to the poor and, if there’s still a shortfall to be made up, “eliminate corporate welfare.”

One of the programs he proposes to eliminate is, ironically enough, a block-granted social welfare program: the Social Services Block Grant. The SSBG (and its $1.8 billion budget) has faced Republican calls for elimination before. The Center for Budget and Policy Priorities says it’s actually a fairly effective program that provides a “uniquely flexible funding source that helps states meet the specialized needs of their most vulnerable populations, primarily low- and moderate-income children and people who are elderly or disabled.” So the safety net doesn’t emerge entirely unscathed.

All in all, the plan represents a significant shift for Paul Ryan, which was a political necessity after he hitched his wagon to Mitt “47 Percent” Romney’s falling star. He’ll get a lot of credit from Beltway insider types for being the brave Republican who took his party in a new direction by tackling the problem of poverty, even though portions of his plan exacerbate the party’s (well-deserved) reputation for being completely out-of-touch with America’s less fortunate.