What's justice for a 551-pound offender?

How does the system handle an offender who's too big for it? 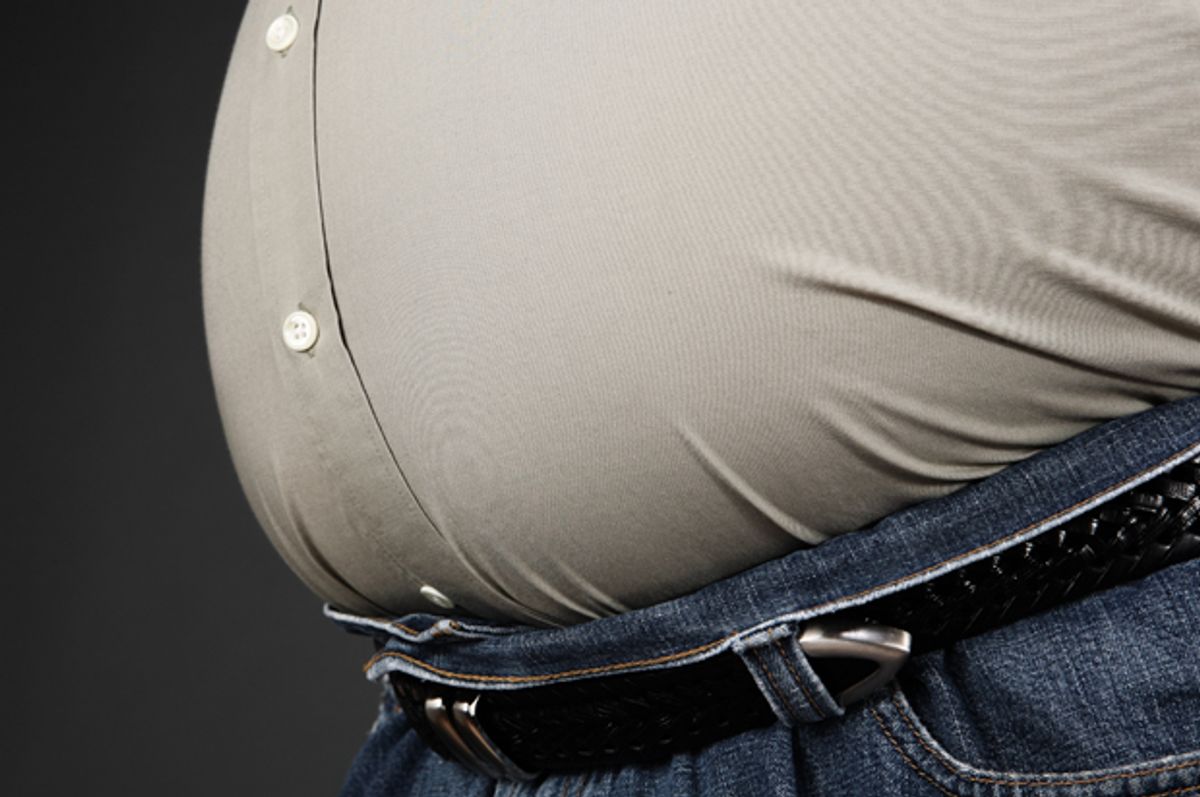 Pharmacist Steven Goodman is a convicted criminal. In 2012 he was given a 30-month sentence for supplying 1 million prescriptions for oxycodone and other drugs in a Florida "pill mill" operation run by twins Christopher and Jeffrey George. But while the brothers are serving out considerably lengthier sentences and other doctors involved have also been sent to prison in a case tied to the deaths of "at least nine patients," Goodman only received house arrest. Not only that, but he this week tried to have the remainder of his sentence nullified. Why? Because 551-pound Steven Goodman's attorney says that house arrest is unnecessary for a man who likely can't leave home anyway.

U.S. District Judge Kenneth Marra originally sentenced Goodman to the house arrest because, as the Orlando Sentinel reports, "He can't dress or bathe himself, and prison beds wouldn't accommodate him. He'd also be exposed to unlimited portions of prison food." Now, nearly two years into his sentence, Goodman's attorney Edward Page has tried to make the argument that the term is pointless. In court papers, he explained, "For Goodman, home confinement with electronic monitoring is both unnecessary and futile because his physical and medical condition effectively confines him to his home." And he painted a portrait of a man who "cannot fit in a car or public bathrooms, and has an extreme fear of falling… His fear is so overwhelming, he just stays home rather than venturing out. Goodman spends most days in his bedroom in isolation." Yet the most emotional argument Page made for lifting the sentence wasn't because Goodman's condition makes it unnecessary. It's because he said that the man's doctors claim he has a fatal lymph disease and have given him less than a year to live, and that "Each day may be one of his last." Goodman, he asserted, wants one last opportunity to go to Ohio to say goodbye to his friends and family. "If the court eliminates the home confinement aspect of his sentence," his lawyer said, "Goodman can endeavor to do this."

But Judge Marra was not swayed from his original sentencing. He questioned how, given his lawyer's description of his current state, Goodman would be able to travel to Ohio, and reminded, "Defendant was spared a prison sentence, not as a favor to him, but in order to spare the Bureau of Prisons the burden of having to care for him." He added, "If defendant's health and obesity effectively confines him to his home, then continuation of that restriction will not adversely affect him."

The Goodman case is unorthodox, but it raises questions about what the appropriate course of action is for a variety of prisoners who don't fit inside the regular parameters of the justice system. A 70-year-old grossly obese man with an apparent life-threatening disease is likely not an immediate threat to the general population. He's certainly not going to go back to the pill distribution game. But this case has ramifications not just about oversize felons. As NBC News reported last year, the elderly now "make up the single fastest-growing segment of the U.S. prison community" -- a demographic that strains the system while not necessarily posing an active threat. And as Cecily McMillan wrote in the New York Times Wednesday, during her recent stint at Riker's, she witnessed a system in which "Inmates are routinely denied basic medical treatment." What does the penal system do with inmates who are too old, too sick? What's efficient? What's merciful? Goodman's sentence already "spares" the Florida prison system of caring for him, but he is still subject to electronic monitoring.

Is confining people like Goodman within the justice system an effective use of its resources? That's a tough call, and I'd dispute his attorney's bafflingly conflicting arguments for why he should be shown leniency. His obesity is no mark of atonement, no proof that his punishment has done anything to reform him. It does appear, however, evidence of a serious problem that the Florida courts seems to have viewed only in relation to the strain it would put on the system, and not something Goodman needed help for. As Judge Marra noted, you can't shrug and say, well, he can't get around much, so where's the harm in lifting the sentence he was given for some serous crimes? But there is also no denying that even if the judge had ruled differently, Goodman's going to spend the rest of his life – however little life there may be left – in a prison of his making anyway. His own body.