House GOP's border conundrum: Will new leadership be able to pass a bill?

New majority leader Kevin McCarthy and whip Steve Scalise are wrangling votes for a border bill. It won't be easy 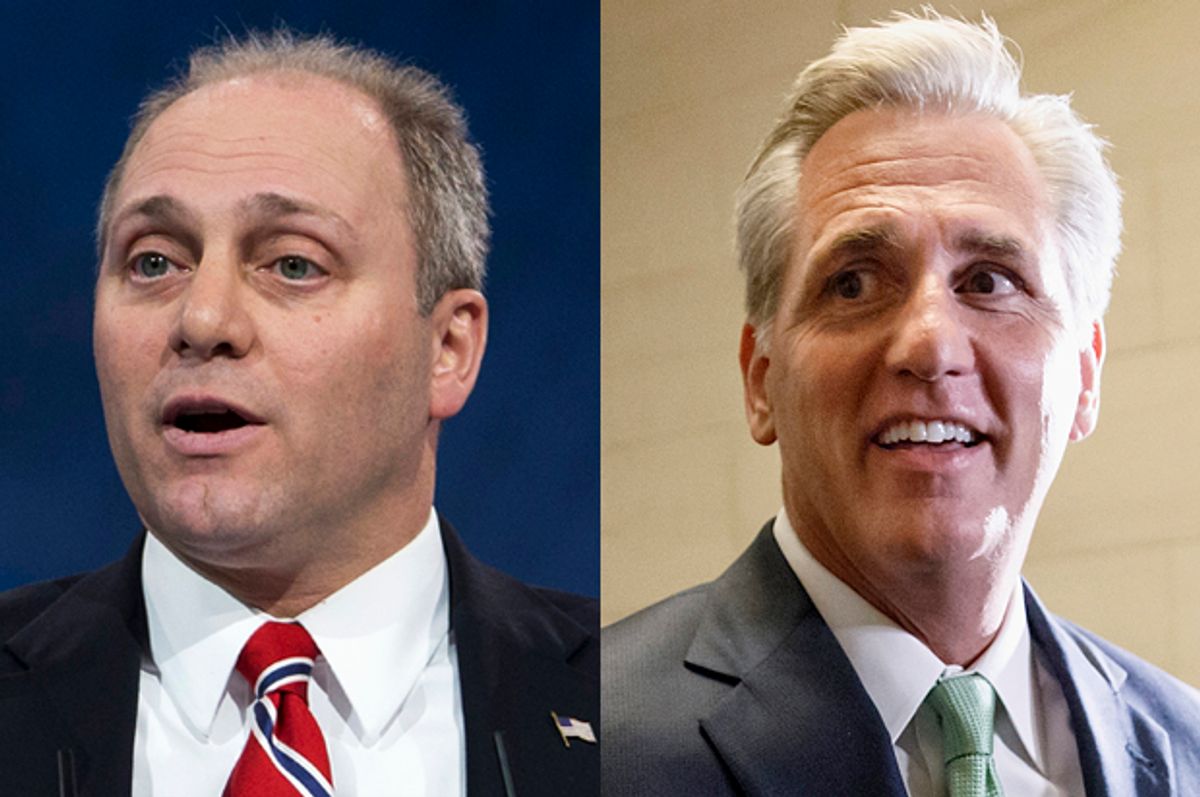 While Cantor is still, technically, majority leader through July 31, he's more or less already checked out from the impossible day-to-day duties of corralling the House Republican conference. Negotiating the proper seven-figure lobbying and/or finance gig is priority #1 for him right now. Being historically humiliated by his own constituents was the best thing that ever happened to him!

Meanwhile, his successor, Rep. Kevin McCarthy, and the new majority whip, Rep. Steve Scalise -- as well as the long-suffering Speaker John Boehner, of course -- have one of those classic "situations" to deal with.

House Republicans met privately this morning to discuss how to proceed on the border crisis, one of Congress' many self-declared emergencies about which it may not be able to do anything. Legislators are scheduled to begin their August recess at the end of next week. While many members of the House GOP don't perceive things like a debt default or government shutdown as hard deadlines for legislative action, the threat of a modest delay to their six-week vacation should certainly spur them into action.

The question for Boehner, McCarthy, Scalise and his "new whip team" (poor suckers) will be, as always, what can get 218 votes? And most of those will have to be Republican votes, because it's hard to see many Democrats playing along with the ideas they're bandying about.

The legislative options have already begun drifting rightward. As of Wednesday, the House working group on border legislation, led by Rep. Kay Granger, was talking about a $1.5 billion supplemental to counter Senate Democrats' $2.7 billion proposal. The House version, unlike the Senate's, would include "tweaks" to the 2008 law granting extra protections to minors fleeing violence in Central America. Now, according to reports after this morning's private meeting, that $1.5 billion figure has already been slashed to "less than $1 billion.... Included in the scaled-back plan is revising the 2008 law, allow border patrol agents to access federal lands, deploy National Guard troops, boost the number of immigration court judges, and work with the central American countries to help repatriate the unaccompanied children."

And then there's this:

The House Republican leadership is also discussing plans to hold a separate vote gutting a 2012 Obama administration directive that deferred deportations for young undocumented immigrants that many Republicans have blamed for the spike in unaccompanied minors.

Ending DACA is the path that Sen. Ted Cruz, House conservatives' spirit animal, urged them to take in a Wednesday meeting. An option that Boehner was ruling out! (Rule of thumb: You know what it means when Boehner rules something out? Nothing.) Cruz was also suggesting that the House not even bother passing a supplemental, because the Senate would just gut it and replace the language with Secret Amnesty.

The House leadership, in theory, would be offering up the defund-DACA vote as a token to conservatives in exchange for their support on the supplemental. If everything were to work out for the leadership, defund-DACA would die in the Senate while passage of the supplemental would open negotiations. Not that those negotiations would be easy -- revisions to the 2008 law are still a major sticking point.

Here's another possibility of how things might work out: terribly for the House Republican leadership! The supplemental wouldn't get enough votes. Conservatives would balk. The only thing that would have enough votes to pass would be ending DACA. When such a proposal has support from congressmen like Rep. Charlie Dent, who's been a vocal critic of House hard-liners' tactics in the past, then passage should be a cinch.

In that case, you'd have Ted Cruz's dream become a reality: The House can pass a sideshow piece of dead-end legislation drawn up by the rightest-of-the-right, but can't pass funding to address the crisis. Democrats all around have a new piece of obstructionist evidence to pin on the GOP heading into the recess. But Ted Cruz can raise some money for having a "spine" or whatever.

Good luck with next week's votes, House leadership! Maybe they'll get a pass just because the conference doesn't want to embarrass their new overlords on their very first test. But a pity vote wouldn't be very Conservative.