Israel is not my birthright

I was raised to think the country was ours by divine right. But this horror has challenged even my deepest beliefs 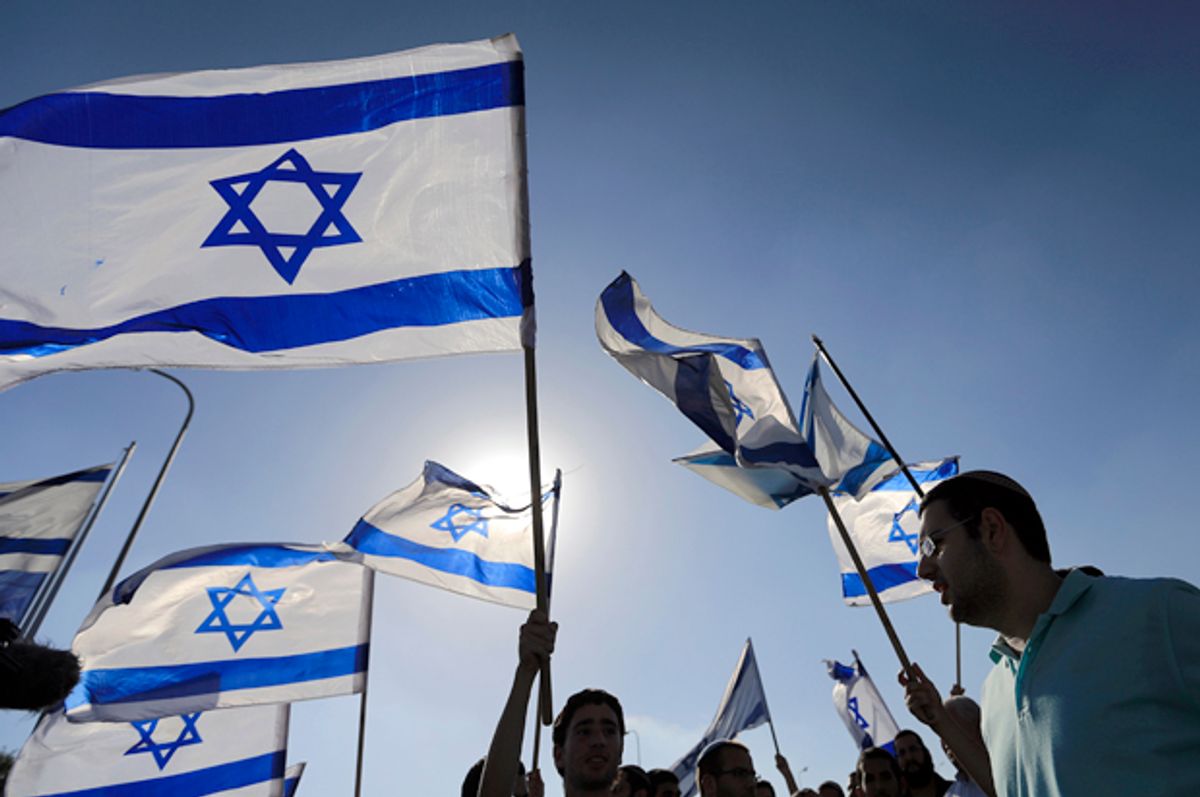 I’m writing this in my new baby niece’s room. I am here in Florida visiting my family because of this niece, this tiny pudgy innocent baby. We are Jewish, and it’s time for my niece to receive her Hebrew name in a sweet little ceremony at our longtime synagogue.

Last night I sat at the synagogue next to my 19-year-old daughter. I felt a swell of joy as the services began; I’d been away too long. I’d loved services as a child and teenager.

And then we hit the first mention of Israel as the Promised Land, and I burst into tears.

And I sat there and listened to the rabbi call Israel our Promised Land, and it broke something in me.

I am an American Jew of a certain age (40), and what that means is that I was raised to believe that Israel was ours by divine right.

It sounds ridiculous when you say it aloud. Especially because, like many of my generation of Jews, I’m not particularly religious. Many Jews my age slid into paganism, a sort of ambivalent agnosticism, or outright atheism; we are cultural Jews rather than religious Jews. And yet when I first spoke about the conflict between Israel and Palestine some years ago, I found that falling out of my mouth – that God promised us Israel. It’s ours because God said so.

My daughter, trying to comfort me after the services, said, “Maybe it is the Promised Land, just not right now.”

My daughter is an atheist. And the narrative got her, too.

The history we are taught in our Sunday school is that we were there first, and that therefore the Palestinians are occupying our land. How long ago were we there, though? And who, exactly, is we? I find myself using that we – “We need to stop bombing Palestine,” “we need to give land back,” but I am not Israeli. I have never been to Israel. This is how deep it runs, this idea of possession.

American Jewish teenagers get a free trip to Israel, paid for by a Jewish foundation. These are called Birthright trips.

My daughter went to Israel two years ago. Not on a Birthright trip, the very name of which raises the hairs on the back of my neck, that entitlement to land that others have lived on for generations. She went with my parents, who have gone many times before. She visited various landmarks; she took lots of pictures.

My daughter sat beside me last night at the synagogue, and I was acutely aware that she could not read Hebrew. Neither can my sister, and my husband lost the language right after his bar mitzvah, years ago.

I moved my finger beneath the words as I sang. I whispered to my daughter at opportune moments – this is the R, this is the L, here are the vowels.

I hoped fervently that it would not happen, but it did – the rabbi spoke of those who hate Israel and hate the Jews, but did not speak of the Israeli army, which is burning children alive; did not condemn the hate of Israelis for Palestinians. He spoke of peace, but he spoke of peace as a thing to force on the Gaza strip, not a thing for both sides to work toward. I clutched my daughter’s hand, trying not to cry, thinking but we are killing children. Where is the peace in that action?

We. We are killing children, we are killing civilians, because we were told that God gave us this land, and half of us don’t even believe.

They, not we. The Israeli navy bombed children who were playing on the beach. This is not we, this is not us, this is not in my name. These are nightmarish actions taken by a government I have no real tie to, despite my childhood indoctrination, despite my name, despite my alleged birthright.

At services last night we spoke of peace, but no peace can come of this.

The answer to genocide is not genocide.

I sat there clutching my sefer, wildly praying for true peace, for all of this to stop, and I can’t see it from here. I can’t see Israel backing off. I can’t see an end to the murder, and it horrifies me. I think no one can possibly be reading the Torah anymore because this is not what we were told to do, this is not how we were told to act, and if you believe Israel is yours because God says so, how can you ignore the rest of what he said?

The rabbi encouraged us to go to Monday’s pro-Israel rally, and my stomach turned.

I am naïve, I suppose. I know that I am heartbroken. I just want everyone to live.

Shin. Lamed. Mem. I trace the letters and teach my daughter the word for peace.

Updated, 7/27/14:  In the initial version of this post, the author incorrectly referred to a Palestinian child burned  by Israeli soldiers. The child was burned by civilians, and Salon regrets the error.