Due to growing complaints over the rock singer's racist past, an Idaho tribe has canceled a show. More may follow 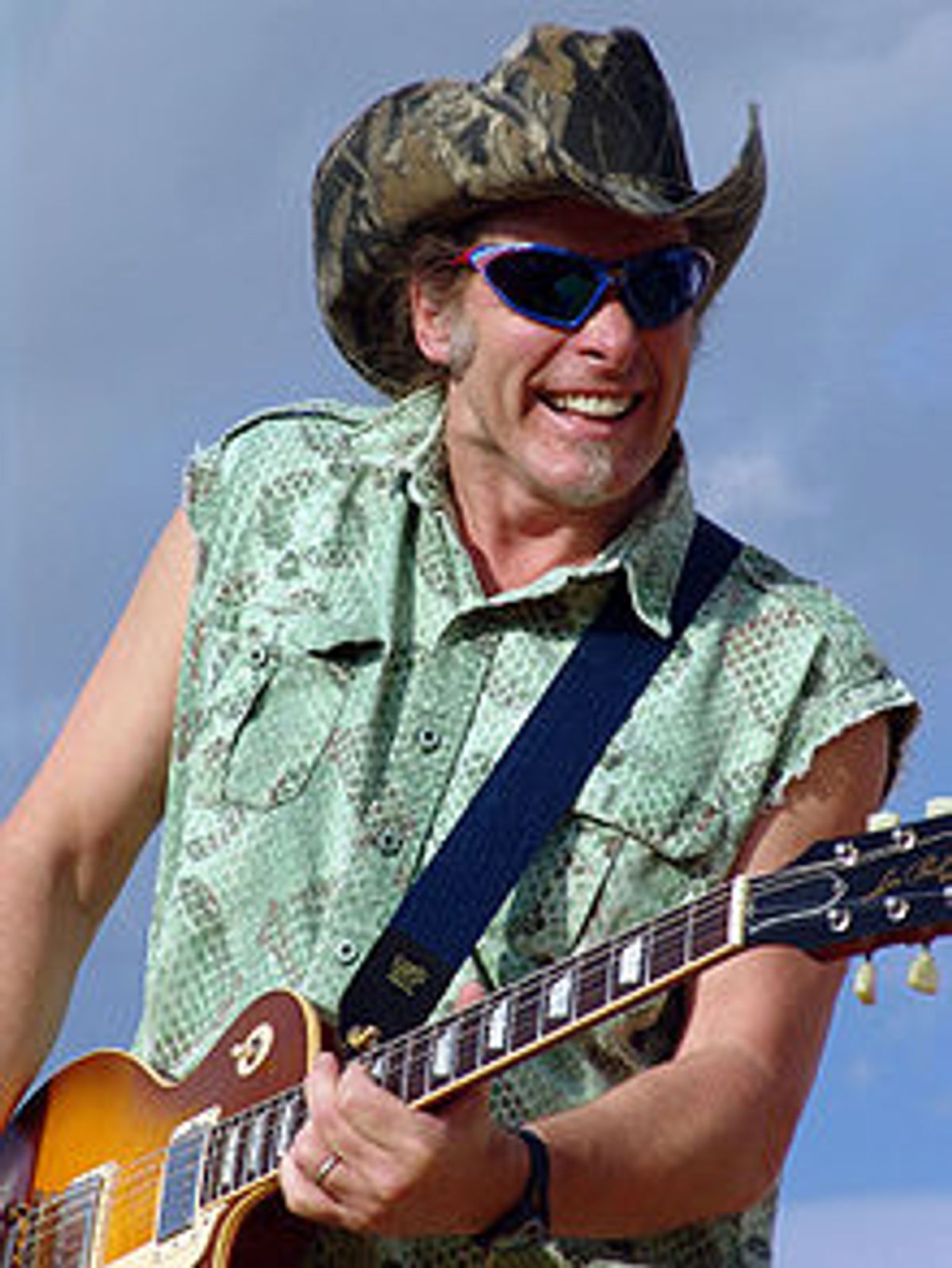 Rocker Ted Nugent, it appears, is going to have a more difficult time booking shows at American Indian casinos after a North Idaho tribe’s decision this week to cancel an appearance because of his “history of racist and hate-filled remarks.”

The focus of the growing issue is not Nugent’s constitutionally guaranteed right of free speech, but why American Indians – the targets of racial animus for centuries – would host a performer whose on-stage antics are riddled with racism.

The Coeur d’Alene Tribe of American Indians cancelled Nugent’s August 4 appearance at its casino after being asked by Hatewatch on Monday how such a performance squared with the tribe’s remarkable history of involvement in human rights causes.

Nugent lashed out following the announcement, saying those responsible for cancelling his show were “unclean vermin,” Gannett Wisconsin Media reports.

The developments are causing a buzz, not only in American Indian circles, but in other communities throughout the United States where Nugent’s “SHUTUP & JAM!” show is booked.

On Facebook and other social media sites, several people have called upon the Puyallup Tribe to cancel Nugent’s two shows scheduled for August 2 and 3 at the tribe’s Emerald Queen Casino in Tacoma, Wash.

Puyallup Tribal Chairman Bill Sterud was en route to Hawaii today and couldn’t be reached for comment, but Hatewatch has learned he just sent a blistering memo directing the Emerald Queen to never again book Nugent.

“Our council is proactive on this,” Weymer said, adding that Nugent previously has performed at Emerald Queen. “I’ve met him myself, and I can tell you he’s a jackass,” Weymer said.

It appeared that attempts were underway to cancel Nugent’s August concerts at Emerald Queen, but that may be a costly move for the tribe and its casino. The Coeur d’Alene Tribe has not publicly said how much it will have to spend to legally terminate its contract with Nugent, after spending hundreds of dollars in radio, television and newspaper advertising for his show, now cancelled.

Meanwhile, Nugent, who recently called President Obama a “subhuman mongrel” and a “chimpanzee,” is getting attention from American Indian social media and news sites, including Indian Country.com.

“Nugent’s racially-insensitive behavior extends to Native Americans as well,” the site said in a lengthy poston Tuesday. “He frequently wears a feather headdress on stage and appropriates a sacred Native symbol in his song ‘Great White Buffalo,’ both of which are highly disrespectful to Native culture.”

The Indian Country article referred to Nugent’s comments on WorldNetDaily (WND.com) about a movement to change the name of the Washington Redskins pro football team. In the article called “A Tomahawk Chop to Political Correctness” Nugent wrote:

Call me crazy horse, but maybe we should start by addressing issues that truly matter most and would actually save Indian’s lives. These brutally ugly and heartbreaking conditions are the real modern trail of tears, but what’s really disgusting is that a Motown guitar player [Nugent] has to shine a light on the tragedy.

The Indian Country article said “anti-mascot activists would argue that the everyday use of a dated slur encourages exactly this sort of casual stereotyping and trivializing of Native culture.”

Nugent concluded the essay by casting himself as a savior of American Indians:

Because of my clean and sober, hands-on conservation bow-hunting lifestyle and song ‘The Great White Buffalo,’ Native American tribes have invited me to teach their young people how to reconnect with the land and teach them how to bow hunt the mighty American bison. It was in their midst that I learned firsthand about the terrible problems facing my Indian Blood Brothers.

“[The] decision by the Coeur d’Alene suggests Nugent may need to double-check his standing in Indian country,” the Indian Country piece said.

Devin Burghart, the Seattle-based Vice President of the Institute for Research and Education on Human Rights (IREHR), applauded “the courageous decision by the Coeur d’Alene Tribe to cancel” the performance. He said his group was encouraging “all other venues to follow the lead of the Coeur d’Alene Tribe and think twice about allowing Mr. Nugent to use their stages to promote his snarling brand of hatred and bigotry.”

But Burghart stressed that the “burden of addressing racism and bigotry shouldn’t fall onto the tribes.” He said it falls on everyone, “particularly the white fans of Mr. Nugent and the many predominantly white-owned venues where he is scheduled to perform” to challenge his racism.