10 reasons to be excited about sex as you get older

Don't despair. There's every reason to believe your sex life will be as satisfying as it was in your 20s -- or more 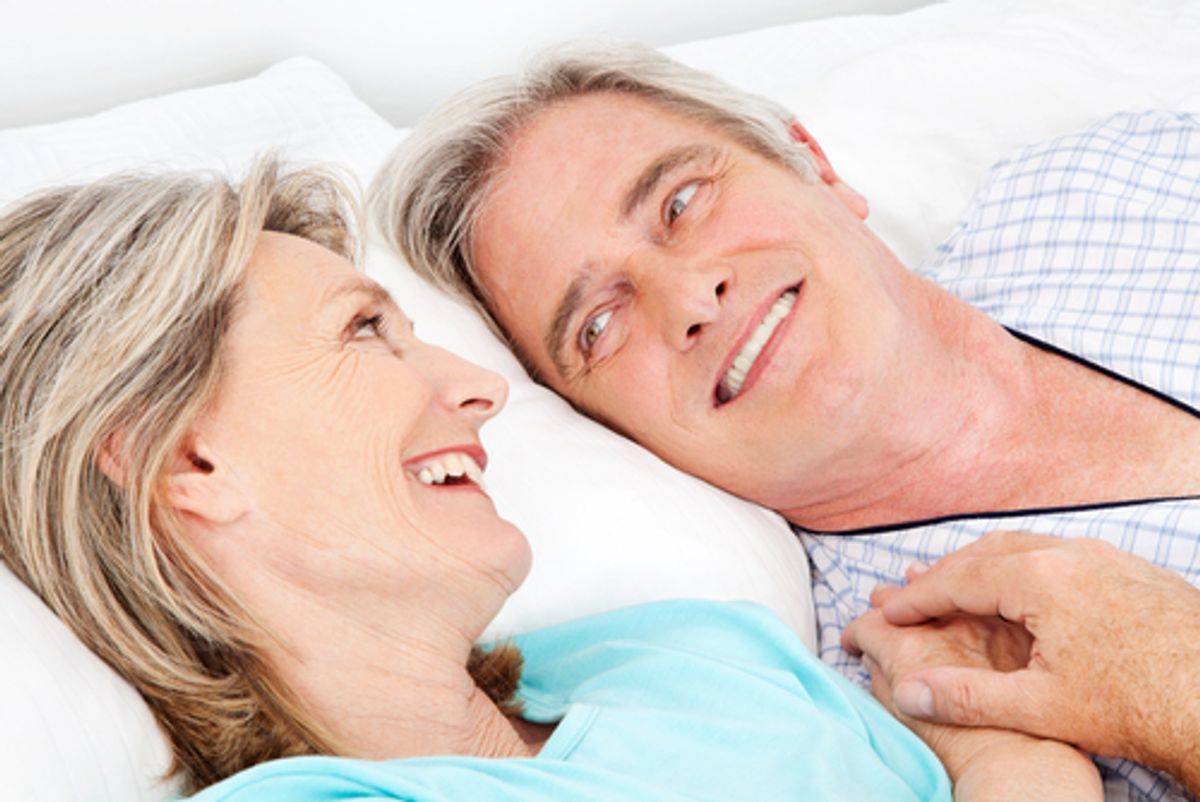 My mother was 40 when I was born, creaking with antiquity by 1964 standards, and she used her advanced decrepitude as a kind of get-out-of-everything-free card. When I would ask why she didn’t get manicures, perms and divorces like the other moms she’d say “because I’m old.”  She was  too old for popular music, for makeup (“What am I,  Baby Jane?”) and too old to offer advice on a dating world that had changed radically since Moses took her to the prom. The closest thing to advice my mother ever gave me on intimacy was “If a man pinches you on the subway, scream “Get your hands off me, pervert!” Then she gave me a police whistle.

Even if she had offered advice that was less, well, practical, I’d probably have been incapable of taking it, largely because, well, what teen or 20 something believes anything older people have to say?

Here, then are ten things true things  about sex and dating that you’re incapable of believing when you’re young. Because old people don’t know anything about sex. They bought their kids on the internet.

1. You’ll have sex that’s as good or even better than when you were younger.

Last year Miley Cyrus, then 20, informed Matt Lauer it was her understanding that people stopped having sex at 40, reports NBC contributor Brian Alexander.

You don’t have to squint to see why young people find it hard to believe that people who can’t get stand up without groaning can still have sex so mindblowing the neighbors might think someone next door is being murdered.

Miley’s dad is 52. It’s a fact that thinking of one’s parents as sexual is so gross and mortifying that denial is necessary. Miley should be glad to know, though, that there is no deadline, no “off” switch that halts hormone production and caulks up various ducts and orifices on one’s 40th birthday. Sexuality changes with age, but good sex is about health, state of mind and chemistry: if you’ve got that you’ll have sex that’s loud enough to scare the dog well into your twilight years.

2. Your hot pants will cool off… and it’s a relief.

So the brakes won’t slam on your sex life, but that doesn’t mean your body won’t ease up on the accelerator. This page about the effects of aging on sexuality details numerous change that can slow down your sex drive with age.

The good news is it’s not a bad thing. Gloria Steinem, on her 80th birthday, talked about how a lower sex drive frees up the "mind for all kinds of things." I agree. Now that I’m nearing 50, it’s a relief to be able to write a story, sit through a movie, or wash the car without my nether regions issuing demands, like that plant in Little Shop of Horrors.

3. Nobody really thinks you wake up looking like that.

When I was younger, after nights of romantic passion, I would sneak off to the bathroom to repair hair, makeup and even jewelry before my partner would wake up. I don’t think any of them really believed I woke up looking as though I was going out to see, or perhaps perform, Cabaret, but I finally figured out that if he's seen your naked body you probably don’t have to worry about him seeing your naked face.

4. All the romantic cliches are stupid, but you should do them while you’re limber and naive.

You’ll also find that satin sheets are, as Madonna said, very romantic, until you slip out of them and almost break your nose, and that if you want to experience sex on the beach you should just put a half a cup of sand in your mouth and your underwear and you’ll get the idea.

The older you get the less you’re willing to put up with discomfort or risk of arrest, so do all the daring, crazy things now, while "safe sex" still means wearing condoms instead of slipping a disc.

There is so much more to sex than sex, chemistry included. In fact, combine sexual chemistry and intimacy and you have the strongest force in nature that doesn’t ever take up time on the Weather Channel. In my cocky youth I thought it was mostly about the physical, but when you start adding in those elements, plus self-knowledge, emotional maturity and experience, you get so much depth and breadth of feeling it's like going from a black-and-white set to 3D HD with surround-sound. Had I known the sublime joy and horrible sorrow it would cause I don’t know whether I’d have sought it out sooner or fled to a convent and never emerged.

6. Sex is not a cure for loneliness.

This notion was kicked in by my friend Charles Martin, and though it wasn’t something I thought applied to me, upon reflection, I can remember times when I pulled people in more as tranquilizers than human beings. It can work for a few minutes, until you realize that you’re often the loneliest when you’re with the wrong person.

When you’re young you can’t fathom it, but changes —age spots, gray hair, menopause — will come, like growth spurts did, like puberty did and the more you do now in regard to diet, exercise, dental care, etc., the more these efforts will make you a happier, healthier, sexier old bag of wrinkles than if you do nothing. Maintenance is easier than repair. The excuse. “I could die tomorrow, I don’t want to waste time on a treadmill,” doesn’t wash when U.S. life expectancy is 76 for men and 81 for women.

Face it: you’re going to live long enough to start caring about your lawn.

8. There are always new tricks.

A girlfriend told me that in her younger years she never could have believed she could have hands-free orgasms, as discussed here on The Doctors by author and sex teacher Sheri Winston.

I’ve asked her to teach me how. If it works, you’ll never hear from me again.

But it speaks to the fact that not only does sex not stop after 40 but learning new, exciting things about sex doesn’t stop either. After all, Olympic athletes are the best of the best, and they never stop using coaches.

9. Whatever is tying you in knots right now is temporary.

Whether it’s a new crush or a broken heart, a friend’s betrayal or a Miranda Priestly boss, whatever feels like the end of the world right now probably isn’t.

Trust me: I know this like I know Beginner’s Math. As you get more and more distance from those peas under your mattress, you will realize that about 95% of the things that cause you sorrow and anger are things you won’t remember two months from now. Change them or drop them, but don’t dwell on them.

If you need proof, watch any of the murder shows on TV: Snapped, Swamp Murders, Secret Lives of Stepford Wives — they’re all full of people who couldn’t just drop it until one was dead and the other was in jail. See what happens when you don’t listen to that damn Disney song fromFrozen, let it go?

10. Don’t be afraid to talk about money

When you’re young and in love and hot for each other there’s no bigger buzz kill than a big, fat stack of bills coming in that you’re not sure how you’re going to pay, something most of us have faced in the last decade or so. That’s true when you’re older, too: cash flow issues can suck the wind right out of your romantic sails sometimes, but talking openly about your financial situation, expectations and hopes is just as important as talking about sexual, emotional or other issues.

Take it from The Guardian’s Suzanne McGee in her Seven Ways  to Stop Arguing With Your Spouse About Money: “…research suggests that if you can find a way to sync your approach to money, that’s going to do more for the health of your relationship than a dozen roses or a diamond will do.”

It’s especially helpful to know if one of you is the type who thinks it should have been two dozen roses and a diamond in a gold bracelet and the other thinks all of that could have gone towards paying off the car. It doesn’t mean you can’t work together, it just helps to know that about who you’re working with.