Gregory punts on poverty: The "Meet the Press" host blew his "exclusive" interview with Paul Ryan

David Gregory asked Paul Ryan just two poverty questions on "Meet the Press," and let him dodge them both 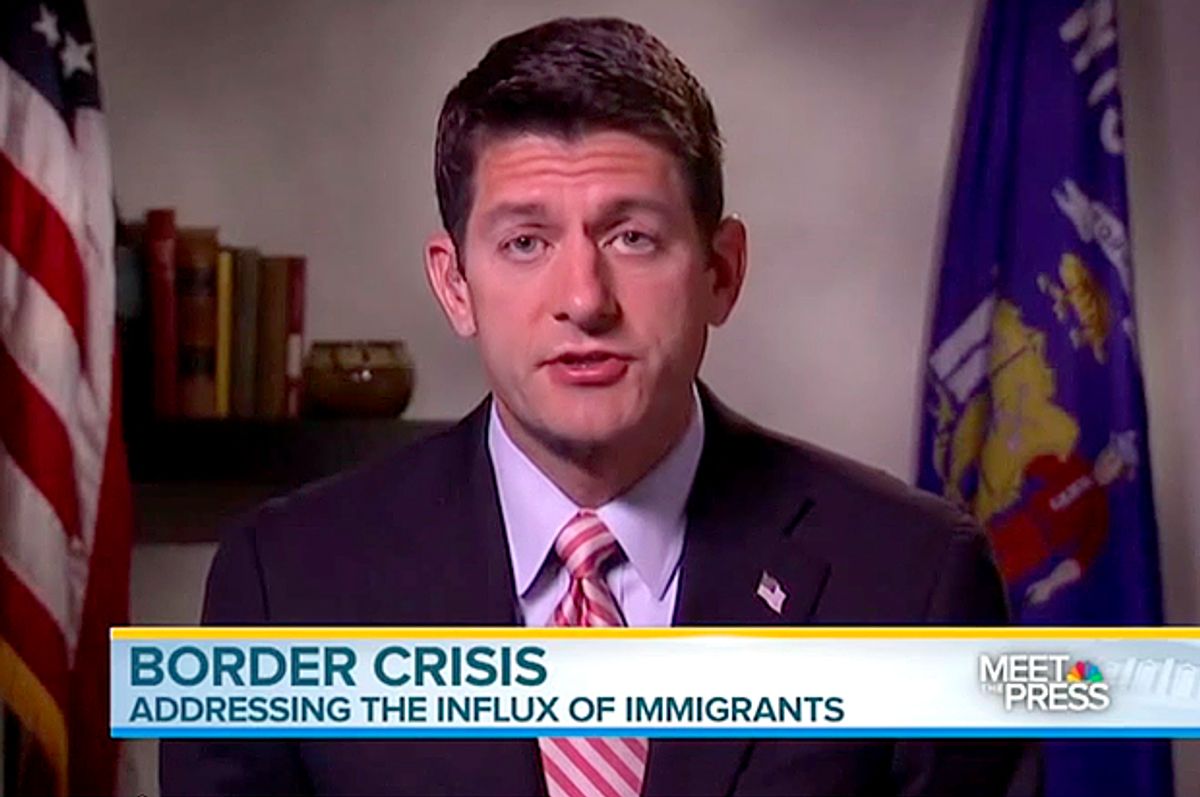 Rep. Paul Ryan stopped by “Meet the Press” yesterday for an EXCLUSIVE interview regarding his newly unveiled proposal to reform federal anti-poverty programs. Ryan’s poverty reform plan was one of the big domestic policy stories of the week, and his presence on a Sunday morning show would have – in theory – allowed for some informed debate and a better, more granular understanding of what he envisions for the nation’s social safety net.

Of course, that theory was dependent upon the participation of a sharp and interested interlocutor who was willing to devote the time and attention to picking apart Ryan’s policy and forcing him to move beyond canned talking points. We, unfortunately, had David Gregory.

Gregory asked two questions. After securing a “Sunday exclusive” interview with Ryan just days after he unveiled his months-in-the-making poverty plan, Gregory asked him just two questions about it. In response to each question, Ryan said absolutely nothing of significance, and Gregory let him get away with it.

The whole of Ryan’s interview totaled just four questions. Before getting into the poverty proposal, Gregory asked Ryan if he supports changing the 2008 human trafficking law that is at the center of the legislative debate over the humanitarian crisis at the border. Ryan said he does support changing the law – an unsurprising answer given that he’d already gone on record saying that. Gregory also asked about gridlock in Congress, and Ryan blamed Senate Democrats. Fascinating stuff.

With half the interview behind him, Gregory finally got to the poverty issue and actually asked a decent question. Ryan’s plan envisions consolidating funds for 11 federal poverty programs into a big, hulking block grant for the states, which (according to Ryan) will give them some flexibility in administering the programs. Gregory asked why, when Republican governors are refusing to accept federal money to expand Medicaid under the Affordable Care Act, we shouldn’t be “skeptical that giving them that kind of power would actually lead to constructive solutions to deal with people who are poor.”

Ryan’s answer was, as Jonathan Chait aptly described it, a “string of unrelated talking points that provides zero engagement with the question.” Here it is, in full:

Well, look, first of all, these programs don't work with each other. In many ways, they end up being counterproductive, because poverty is a complicated problem and it needs to be customized. And secondly, we had basically a poverty management system with respect to the federal government.

And the best way to do that, in my opinion, is to listen to people on the ground, the people who are fighting poverty person to person, and give them more flexibility in exchange for more accountability to actually get people out of poverty. We have learned good lessons about the right way to do this and not.

And I would argue that we can customize the benefit to a person based on their particular needs which actually helps them get out of poverty long term. We've spend $800 billion every year on 92 different programs to fight poverty. Yet we have the highest poverty rates in a generation.

Even though Ryan had steered comfortably clear of anything resembling an answer, Gregory moved on to the next question. He asked Ryan to respond to a previous statement he’d made about the “dependency culture” among the poor, saying to the Wisconsin Republican: “What you seem to be saying is that people have a problem with their own dependency here that government is only furthering.”

Ryan, once again, ducked the question. And not only did he duck it, he actually repeated significant portions of his answer to the previous question. Here, again, is Ryan’s answer in full, with the repeat talking points bolded:

That's not my intent and it's far from it. And my point, and I'll make it again, is we don't want to have a poverty management system that simply perpetuates poverty. We want to get at the root cause of the poverty to get people out of poverty. And I would argue that that is the best way to go forward.

And that's what we're proposing here, which is have benefits that are customized to either person's problems, because poverty is very complicated. And not just keep them where they are, but have them get to where they want to be. And that is what is the thrust of these proposals. The federal government's approach has ended up maintaining poverty, managing poverty.

In many ways, it has disincentivized people to going to work. In some cases, you lose more in benefits if you go to work. So people don't go to work because of the federal disincentives that do so. So we need to reemphasize getting people up and on their lives and helping them give them the tools to do that. That's the point.

Able-bodied people should go to work and we should have a system that helps them do that so that they can realize their potential. That for me is a far better system to get people out of poverty long term than to just spend more hardworking taxpayer dollars on a program that is not getting the results that people deserve.

And that was it. Interview over. Ryan breezed through without so much as a hiccup or an uncomfortable moment. There was no attempt to make Ryan reconcile the tension between his “deficit neutral” poverty plan and basically every budget proposal he’s put forth, which balance the budget through massive cuts to social programs. There was no discussion of how block-granting federal anti-poverty programs would result in decreased effectiveness and, over time, drastic funding reductions. There was nothing about the most controversial and paternalistic aspect of Ryan's proposal: the "contracts" he'd require government aid recipients to sign and adhere to under threat of "sanctions." If Gregory had bothered to invest the proper amount of time and interest into the interview, he might have squeezed answers from Ryan on these questions.

But there were other matters for Gregory to devote his attention to, like a pundit panel discussion of marijuana legalization that featured not a single expert, but did allow for David Brooks (sixth appearance in 2014) and Judy Woodruff to make some silly weed jokes.

Last week I wrote that “Meet the Press” should be canceled because it’s become too much of an icon of Beltway insider culture and sacrifices its role as a public affairs program in order to give self-important pundits a platform to regurgitate conventional wisdom. I guess I owe David Gregory some thanks for helping to prove my point.