White women: Checking your privilege is not good enough. 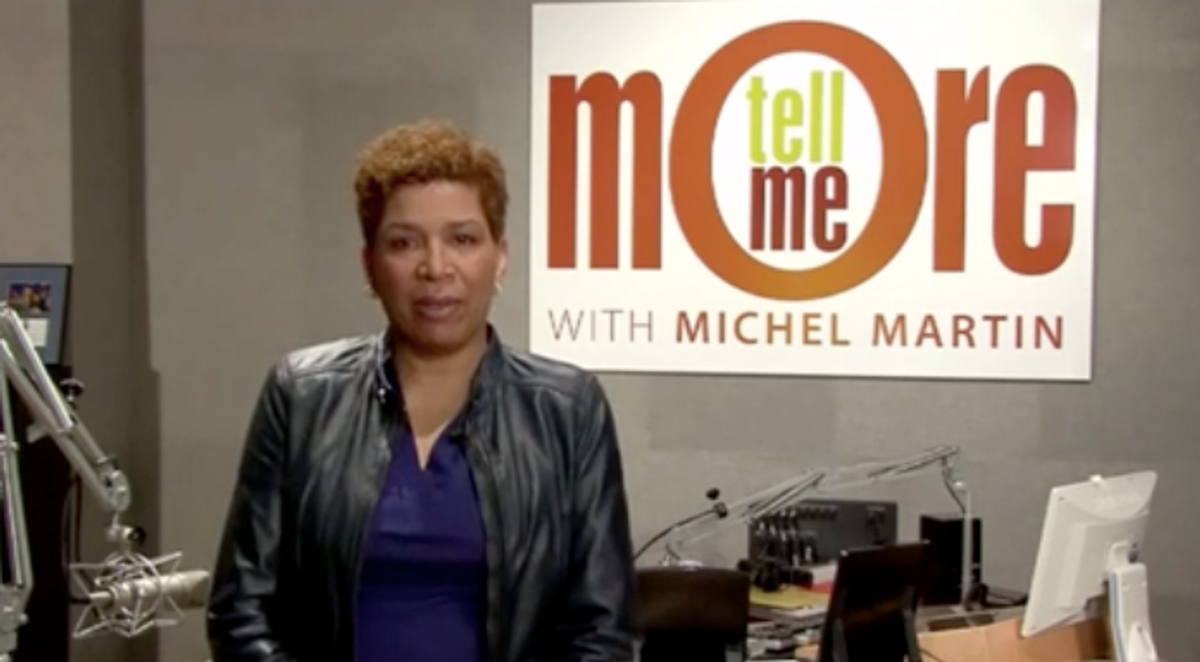 On the last week of NPR's groundbreaking program about issues that women of color face in America, "Tell Me More," host Michel Martin wrote an essay in the National Journal that should be essential reading for the feminist workplace discussions currently associated with Anne-Marie Slaughter and Sheryl Sandberg. Something is missing in our national discussion about feminism, says Martin: the experiences of women of color.

The issues Slaughter wrote about in her 2012 Atlantic essay, "Why Women Still Can't Have It All" -- juggling family life with work demands, battling sexism at work, and dealing with unrealistic expectations rooted in a patriarchal culture -- "affect all women who work outside the house — truly, anyone in a caregiving role," wrote Martin. "Still, though, I would tell you things are different for women of color. They are different for reasons that are small and nuanced, and for reasons that are big and consequential," she continued.

While she explained that she had written the piece for "her demographic" of "highly educated, well-off women who are privileged enough to have choices in the first place," I strongly believe that the issues she raised matter to women and families far beyond that demographic. Unfortunately, in the conversations I've seen about and around the piece—in online forums and at planned events, even those in which I've been asked to play a part—the discussion too often ends where it began: with privileged, mostly white women at the forefront. And that means issues disproportionately faced by women of color are pushed to the margins again and again.

Let's be clear: Women of every background face challenges when they try to balance careers and families, not least of which is the expectation that they should feel guilty for working outside the home even when they have no choice. But women of color often face additional pressures that white women are far less likely to encounter.

Martin provides several examples of these pressures: racism that makes everyday struggles even harder for women of color, operating within cultures that often project a set of expectations that white women don't usually face, executives who put women of color on the sidelines because their work or point of view may not speak to the supposed majority, and drastically different economic realities (she recounts some staggering statistics -- "women of color between the ages of 36 and 49 have, on average, $5 in assets compared with white women's $42,600, according to a report by the Insight Center for Community Economic Development").

All of these pressures push women of color to the bottom, where no one can hear them:

What has made a trying situation even more painful is the sense that our story is not worth telling. Too often in my baby-boomer generation, women of color have had to fight our way into conversations that should have included us to begin with. That needs to change. It needs to change because while we have many experiences that are similar to those of our white colleagues, we are also living with realities that are very different. I believe that if those conversations had taken place, had been truly inclusive, and had considered a broader array of life experiences, we would all be further along than we are now in addressing so many of the things that, for many women, make life more difficult than it needs to be.

For Martin, it isn't enough that white people, women included, "check their privilege." Feeling guilty or acknowledging that you can take certain things for granted doesn't do much unless it amounts to action. Her essay serves as a call to action to turn that privilege into something women of color can use -- physical, financial and emotional support:

When it comes to the difficult questions of family and work, the silence and the distance between women of different backgrounds and ethnicities must end. Our problems are often different, but we need to seek solutions together. This is not an argument for a particular strategy or political philosophy, but it is to say what seems obvious to me: that issues surrounding child care and caregiving in general are problems that affect millions of us, from all walks of life, and they require incentives and education and enforcement—all matters that public policy is supposed to address. What other vital social function is so necessary, yet so randomly acquired, so lacking in standards for the many who need it, yet so wildly expensive?

Women of color have a long history of making a way out of no way, of rising out of circumstances many would consider impossible, of finding hope and purpose in the most difficult circumstances. Surely these are strengths that should be brought to bear on these issues, and surely there is a way for white women to join us in this struggle. There is a saying that is popular on some college campuses right now: Check your privilege. As I understand it, it's mainly aimed at advantaged white people who are being admonished to recognize their advantages, especially ones they take for granted. I won't presume to speak for all women of color so I will speak for myself: I don't care about that. I don't want your pity, and I can't use your guilt. I don't want my white female colleagues to "check" their privilege. I want them to use it—their networks, their assets, their relationships—to form a united front with women of color, and to help improve things for all of us.

Martin's essay demonstrates why it's such a blow to media (and society) that "Tell Me More" is going off the air. Since its inception in 2007, the program "has been a place for women from all backgrounds to tell their own stories, and discuss what it really takes not just to survive but thrive," Martin wrote. It's NPR's only program to do so. Martin will stay at NPR, where hopefully she'll continue to make muted voices louder. "Tell Me More's" last broadcast is Aug. 1.