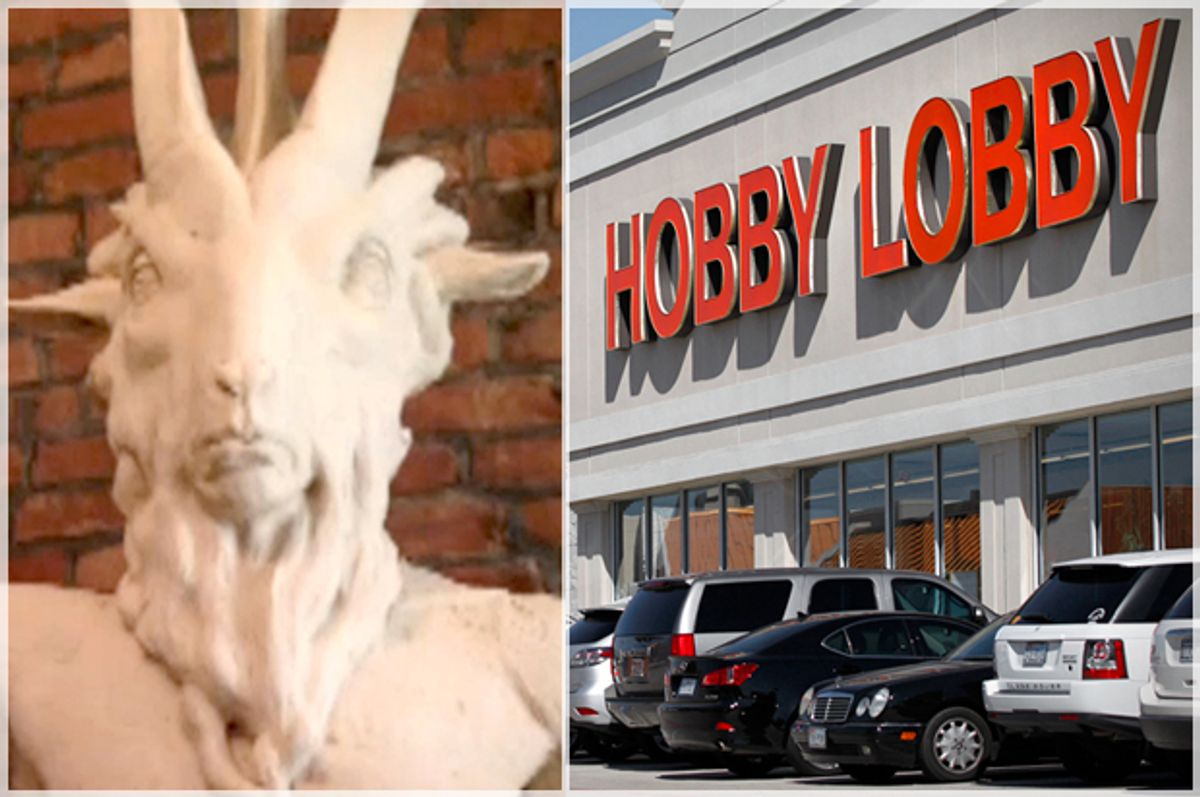 Remember how satanists are building a statue of a 19th century goat-man occult symbol to place outside the Oklahoma State Capitol because there is already a Ten Commandments monument on display? Well, those same satanists are now using the Supreme Court's sweeping Hobby Lobby decision to challenge coercive mandatory counseling laws by requesting a religious exemption for satanists (and non-satanists).

“While we feel we have a strong case for an exemption regardless of the Hobby Lobby ruling, the Supreme Court has decided that religious beliefs are so sacrosanct that they can even trump scientific fact," Satanic Temple spokesperson Lucian Greaves said in a Monday statement. "This was made clear when they allowed Hobby Lobby to claim certain contraceptives were abortifacients, when in fact they are not. Because of the respect the Court has given to religious beliefs, and the fact that our our beliefs are based on best available knowledge, we expect that our belief in the illegitimacy of state­ mandated ‘informational’ material is enough to exempt us, and those who hold our beliefs, from having to receive them.”

The claim here is not quite as apples-to-apples as the Ten Commandments/goat-man hybrid statue, but you can easily follow their thinking. The Hobby Lobby decision granted 90 percent of the corporations in the United States a kind of religious personhood under the Religious Freedom Restoration Act. So now the government can't require Hobby Lobby or any corporation to include comprehensive contraceptive coverage in its employer health plan if that coverage violates the corporation's religious beliefs.

Because medicine and scientific fact are the tenets of satanists' faith, then medically inaccurate and coercive counseling laws present a substantial burden, according to Greaves. This is pretty much what Ruth Bader Ginsburg was talking about in her dissent when she said the justices had "ventured into a minefield." It just so happens that these are satanists making a faith claim under the legal precedent, and not, you know, a company that produces soy milk and hates birth control. But it's the same idea.

According to data from the Guttmacher Institute, 35 states require people seeking abortion care to undergo counseling before they can have the procedure. In South Dakota, a state-mandated script forces doctors to tell patients that having an abortion will lead to an "increased risk of suicide ideation and suicide," based on a refuted but often-cited study linking abortion care to mental health problems. According to the same script, the procedure "will terminate the life of a whole, separate, unique living human being." (In addition to providing patients with inaccurate information, the mandatory counseling session is another way states can force people seeking care to make multiple trips to the clinic, adding a time and cost burden to the procedure that can make it harder to access. But since "don't waste my time" is not yet a tenet of any religious faith, those burdens may not apply in the satanists' claim.)

As Greaves notes, the Satanic Temple isn't the first organization to challenge the mandatory counseling laws, but it is the first to do so as a matter of faith. Planned Parenthood and other reproductive rights groups challenged much of the South Dakota "informed consent" script, and succeeded in getting certain portions of it -- including false medical claims -- invalidated. But other parts of the script that doctors must read, like the line about "the life of a whole, separate, unique, living human being" and the suicide ideation stand because other courts -- including the Supreme Court -- have made it clear that states are allowed to restrict access to abortion based on really dubious claims.

The Satanic Temple has provided a pre-written letter that people can present to their doctors in an attempt to be exempted from mandatory counseling. So while doctors in South Dakota and elsewhere in the country read patients their state-mandated script, patients can now come back with a satan-mandated rebuttal: