"Meet the Press" airs unconfirmed Israeli video, asks if Hamas uses UN for propaganda. The propaganda tool is him 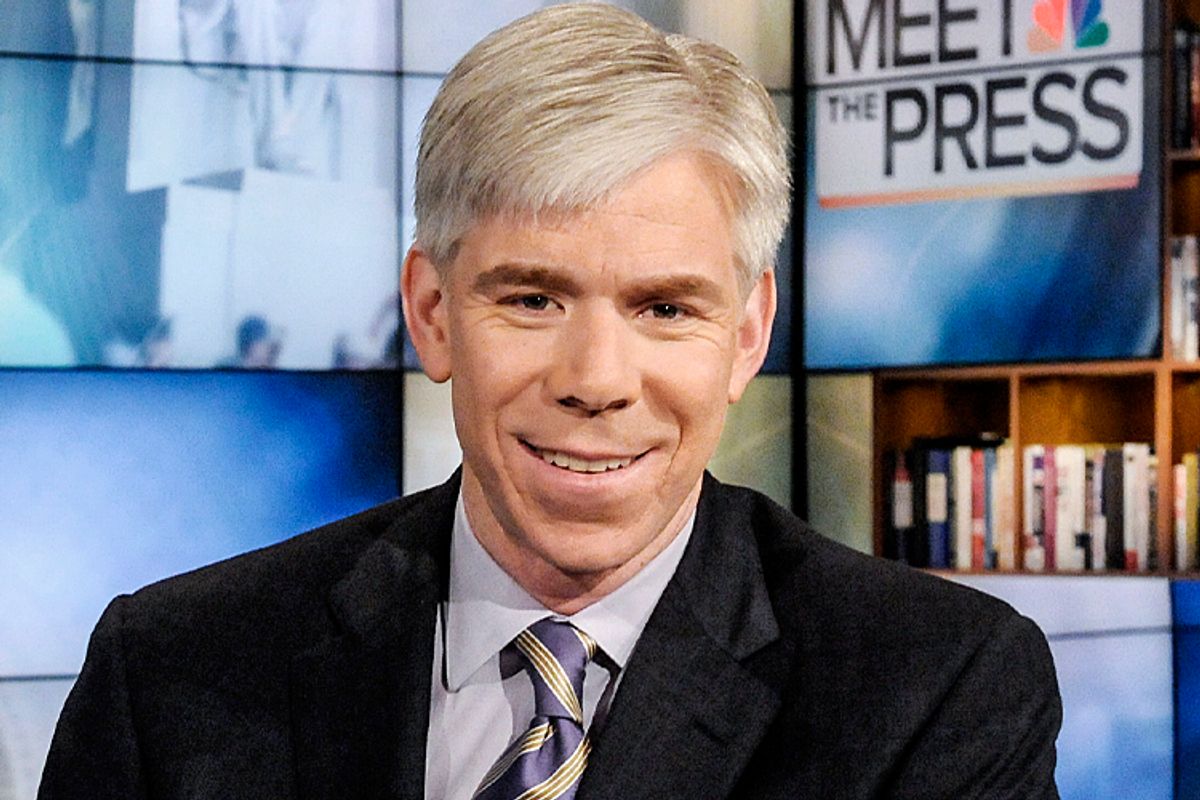 Please. NBC. Please put David Gregory and "Meet the Press" out of our misery. Pretty please? Would it help if I released a wholly unverified video claiming that Hamas was firing rockets towards Israel out of 30 Rock?

Last Thursday, as we noted at the time, Israel had reportedly bombed a U.N. shelter at a U.N. school compound, "designated as a haven for the displaced," according to the AP. The attack on the shelter in northern Gaza was said to have killed at least 15 and injured scores more, many of them children. Israel had claimed, at the time, that they had sent a warning the night before so, presumably, it's all cool and totally the Red Cross' or Hamas' or the children's own fault for having been killed or injured in Israel's mortar attack. Had they only re-located to a safer place --- like, say, a U.N. shelter?! --- none of it would have happened.

Israel claimed at the time that the school compound in question had been used by Hamas as a base for firing rockets at Israel.

On Sunday, Israel released a grainy video purporting to show rockets being fired from the compound. Minutes after they had posted it to YouTube --- and just after his interview with Israeli Prime Minister Benjamin Netanyahu --- David Gregory of NBC's "Meet the Press" confronted U.N. Relief & Works Agency spokesperson Chris Gunness about the video --- which the U.N. spokesman could not see from his satellite location in Tel Aviv.

"The Israeli government has released videotape within the past hour, it was posted on YouTube, NBC News hasn't independently verified," Gregory explained to Gunness. "The Israelis say --- and I realize that you cannot see this video, our audience can, and I'm going to describe it to you --- that purports to show rockets being fired from a U.N. school."

"Is this accurate?" Gregory asked. "Could this be happening without the U.N.'s knowledge, that would only bolster the Prime Minister's point that, in fact, Hamas is using civilians, using the United Nations even in a kind of propaganda war?"...

"Gunness," as David Edwards at RAW STORY notes, "found the notion that he was being made to respond to a[n] unconfirmed video that he couldn't even see so ridiculous that he could barely contain laughter."

"Look, to be fair to me, to bring me on a live program and expect me to comment live on air on pictures I haven't actually seen, I think anyone looking at this program would agree that's really unfair," Gunness explained. "I mean, if I can see it, I'll happily comment on it."

"We have said that all sides have to respect the inviolability of U.N. compounds, and that's both sides. So if this is what you say it is, we would strongly condemn it," Gunness said. "We're a humanitarian organization. You know, we're not an organization with an army. We have moral force. We have the force of international law. And we have the principles of humanitarianism to protect us. But that's it."

He went on to say that the "U.N. protected school," flying a blue U.N. flag, was clearly marked as such, and the location had been given to Israel. He also said that the relief organization had "spent hours on the phone begging --- pleading with the Israeli army to allow civilians out on that terrible day" and they did not allow them to do so.

Later in the show, Gregory was forced to issue his version of a "correction" or an "apology", which likely went unseen by many who saw the earlier, unconfirmed, Israeli-provided video of what were purported to be rockets fired from the U.N. shelter. As he issued his "end note," Gregory showed the video yet again.

"An end note to an earlier conversation about Gaza. We asked, as you will recall, a spokesman about this video which Israel claims --- Israel claims --- showed rockets being fired by Hamas from a U.N. school in Gaza," Gregory told viewers. "This is shot by the Israeli government, and that's their claim. The U.N. has reviewed it, tells us they have confirmed, in their view, the video does not show rockets being fired from U.N. administrated school in Gaza. So, this is a back and forth we are not able to settle at this point."

Here is the interview with Gunness and Gregory's later "end note"...

Recall David Gregory's earlier question to Gunness, as he showed the grainy, black and white footage of purported rockets being fired from the U.N. shelter to viewers, which the U.N. later saw and denied that it showed what Israel had claimed: "Could this be happening without the U.N.'s knowledge, that would only bolster the Prime Minister's point that, in fact, Hamas is using civilians, using the United Nations even, in a kind of propaganda war?"

Perhaps the question is better restated this way --- in the same way it could have been restated when the U.S. Administration, before the Iraq War, was using NBC and "Meet the Press" in the same way: Could it be happening without NBC's knowledge, that would only bolster critics of Israel that, in fact, Israel is using U.S. mainstream news outlets, using NBC's "Meet the Press," in a kind of propaganda war?

The evidence, and the history of both Gregory and "Meet the Press" would suggest that that absolutely "could be happening," and most likely is. It is hardly unusual for either side in such a conflict to use propaganda to try and make their case or, to put it more kindly, make their case in a way that puts them in the most positive light. But it remains the media's job to try and sort out what is and isn't propaganda before becoming a mouthpiece for that propaganda.

On the same day last week that Israel bombed the U.N. shelter, I had a late-day dentist appointment. My hygienist asked me how things were going, and I said "lousy," that Thursday had been one of the worst news days I'd recalled in a very long time. She'd been at work all day and hadn't heard about the list of breaking and tragic stories that I'd rattled off to her, including the Israeli attack on the U.N. shelter.

"Israel wouldn't do that!," she quickly objected in response.

"Yeah, well, they did and, they've admitted as much," I told her, explaining that they claimed Hamas rockets were being fired from the facility, that they'd warned those taking shelter there to get out, and that Israel had claimed that Hamas would not allow civilians to leave the compound.

As of Monday afternoon, according to USA Today, "More than 1,000 Palestinians have died in the conflict so far, the Palestinian Health Ministry says. Before Monday's attacks, the IDF [Israeli Defense Forces] had said 46 Israelis had died, including 43 soldiers."

On Monday, according to the paper, nine Israeli soldiers were killed "in multiple clashes", and another refugee camp in Gaza City was struck by rocket fire, killing 10 more Palestinians, nine of them said to be children, and a 4-year old was killed in his family's house elsewhere in Gaza...

Ayman Sahabani, the head of the emergency room at Shifa Hospital here, said nine of the refugee camp victims were children under age 12. Dozens more people were injured in the strike, he said, plus several more were hurt when another missile hit the hospital compound.

I took no joy in relating the news to my dental hygienist last week. I strongly support Israel's right to exist and to defend itself. I do not support its "right" to attack civilians, even where they claim that rockets are being fired (rockets which, it must be noted, had succeeded in killed exactly zero Israelis before they began their offensive), and even where they claim to have sent a warning to evacuate beforehand (evacuate to where?!)

If Israel believes that this strategy --- which they have repeated for decades --- will ultimately bring peace to the region, they are no more correct about that than the U.S. was when it decided launching its indiscriminate "War on Terrorism" after 9/11 would end, rather than fuel, decades of continuing hatred and attempted attacks.

It is because I support Israel's right to exist that I strongly condemn their attacks (along with Hamas'), simply because, in the end, their "disproportionate response" to the undeniable threats they face, as British Deputy Prime Minister Nick Clegg described it recently, is a "form of collective punishment" that will ultimate hurtIsrael's cause far more than it will help it.

"Because all it does, of course, in the long run," said Clegg, "is act as a kind of, almost as an incubation, if you will --- it incubates the next generation of violent extremists who want to do harm to Israel."

When my hygienist said "Israel wouldn't do that," I suspect she was echoing the knee-jerk reactions of a majority of Americans who cursorily follow the corporate mainstream media --- like NBC's marquee Sunday "news" program, "Meet the Press" -- which continues to be all too happy to advance "a kind of propaganda war," so long as it's "a kind of propaganda war" run by the pre-approved powers-that-be. It was not unlike the moment just over a year ago, when Gregory forwarded the U.S. government's own propaganda line to charge that journalist Glenn Greenwald was "aiding and abetting" NSA whistleblower Edward Snowden.

It's hard to imagine Gregory confronting Netanyahu, or anyone else representing the Israeli government, with damning video that he couldn't see, much less video that was completely unverified as actually illustrating what those who released it claimed that it did.

It's also hard to imagine someone screwing up as frequently as David Gregory does --- but on behalf of those who are not friendly to the U.S. government --- still having a job at all at any corporate U.S. media outlet.