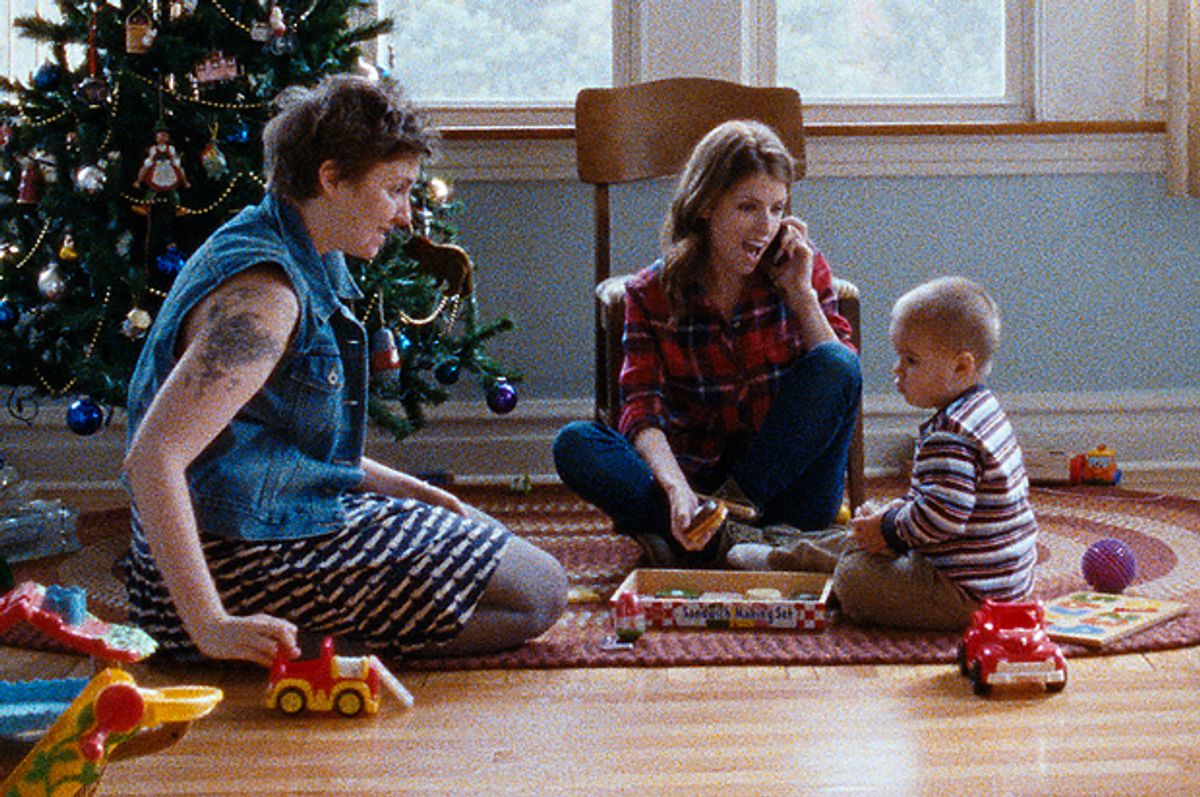 It may be a little strange to see a Christmas-themed movie released in the dog days of summer. But the contrast works to the benefit of Joe Swanberg’s low-key but thoroughly winning domestic comedy “Happy Christmas,” which arrives as a blast of cool air from the Chicago winter, and a reminder that American cinema has another register besides giant robots or interspecies warfare. The combat between members of our own species, much of it conducted in apparently contented middle-class homes just below the surface of ordinary life, can provide more than enough drama.

“Happy Christmas” is built around an unshowy but terrific lead performance from Anna Kendrick as Jenny, a woman in her mid-20s who has broken up with her boyfriend in some other city and descends on her older brother’s family in Chicago for the holiday season. It’s an entirely familiar comic situation, but one that has been reconfigured for a new world of generational and gender politics, and one that Swanberg handles with considerable subtlety. Even the Christmas-ness of “Happy Christmas” is pretty muted; Bill O’Reilly will be unhappy! Jenny’s brother Jeff (played by Swanberg) and his Australian novelist wife, Kelly (Melanie Lynskey), have a tree in the living room and lights on the wrought-iron railings on the porch, but nobody ever talks about Christmas, and there’s never one of those extended-family dinner scenes that typify the genre.

If you don’t know Swanberg’s work, or only became aware of him through the 2013 hit “Drinking Buddies,” with Olivia Wilde and Jake Johnson, here’s the CliffsNotes version. He’s an indie writer-director who has cranked out no-budget movies at a fearsome pace since the mid-2000s (I count 17 features in 10 years), and who was first celebrated and then demonized as the founding father of “mumblecore,” a supposed movement of improvisational, homemade cinema about disaffected and rootless young people. There are plenty of good reasons to criticize Swanberg’s work, but he was never satisfied with that label or that niche, and has pushed hard to reach another level as a dramatist and filmmaker. With “Happy Christmas” and “Drinking Buddies” – and I much prefer the newer one, honestly -- he may have found it.

Kendrick’s Jenny is a pint-size, adorable force of chaos; while she doesn’t telegraph depression or distress or bipolar disorder or whatever other buzzwords, she has a slightly radioactive affect, and her arrival injects an abrupt note of instability into the apparently tranquil post-hipster marriage of Jeff and Kelly. He does something in the music industry; she’s supposedly writing her next book but really spending all her time at home with the baby (played in scene-stealing fashion by Swanberg’s real-life 2-year-old son). I can only assume that their house is one Swanberg or his team uncovered in real life, since his cinema stands or falls on improvisation and serendipity: A perfectly preserved 1950s rowhouse, complete with a basement Tiki bar furnished in cork and rattan, no doubt by a now-deceased former owner of the World War II generation. It’s not even necessary to unpack the symbolism, maybe because it isn’t even symbolism: Jeff and Kelly live in an inherited, ersatz version of adulthood.

On her first night in Chicago, Jenny goes out to a party with her old friend Carson – and yes, that’s Lena Dunham, threatening to disrupt the proceedings with a charming supporting role and a deliberately unflattering ultra-short haircut. Dunham’s presence is only distracting for a moment or two; she doesn’t take over the movie and is really and truly playing a sidekick and/or catalyst here, not just a version of Hannah from “Girls.” While the party Carson drags Jenny to is without question the kind of event where one might well get hammered and baked and go home with someone new, Jenny has the dial set to 11 on all counts: She drinks and drinks and drinks and goes at it in the bathroom with some dude she’s just met and then passes out on the hostess’ bed, soundly enough that Jeff must be summoned to drag her home.

Kelly has some kind of prim maternal response to all this, or at least she thinks she does – can we really have that girl in a house with our baby? -- and the next day she sends Jeff down to the Tiki-bar basement to “have a talk” with his sister. That might be my favorite scene in the movie: Jeff parks himself in the lounge chair for a minute or two, while Jenny’s on Facebook or something. Finally he asks her if she’s done with her dirty dishes, and she says yeah. He takes them and leaves.

One of the fairest ways to sum up the appeal (or non-appeal) of “Happy Christmas” might be that either you think that scene is hilarious, and true to the reality of family relationships in a way movies almost never are, and that it tells us all we need to know about the dynamic between Jeff and Jenny, or you don’t. There would be many other ways to play that brother-sister scene for bigger laughs or heightened awkwardness or open hostility or whatever; perhaps only Swanberg would opt for total silence. That scene also marks the moment when Jeff begins to recede into the background a little, which is another unexpected and interesting choice. Another version of this story might have made Jeff the hero, a beleaguered but likable man-boy who does some growing up while navigating between his crazy sister and his frustrated wife. We should all be profoundly grateful this is not that movie.

Kelly reluctantly agrees to give Jenny another chance as both a baby sitter and a houseguest. When Jenny and Carson drag her down to the Tiki-bar for a naptime beer or two – and a bracing feminist chat that feels like a 21st-century update of Virginia Woolf -- the essential female-centric dynamic of “Happy Christmas” begins to reveal itself. It’s a terrific scene, in which all three women bounce off each other with electricity and sympathy: Jenny and Carson tell Kelly that they think she looks great, despite her somewhat bedraggled mom-ness, but they also have important things to tell her about the nature of her marriage and the state of her creative life. If you express it as arithmetic, it sounds a little crude – both Jenny and Kelly have something the other one needs – but this discovery emerges organically from their awkward situation, and never feels like a screenwriting decision. (Indeed, Swanberg rarely or never relies on written dialogue.)