Billy Eichner and Amy Schumer have the formula down pat. But Kimmel's interviews can feel like a missed opportunity 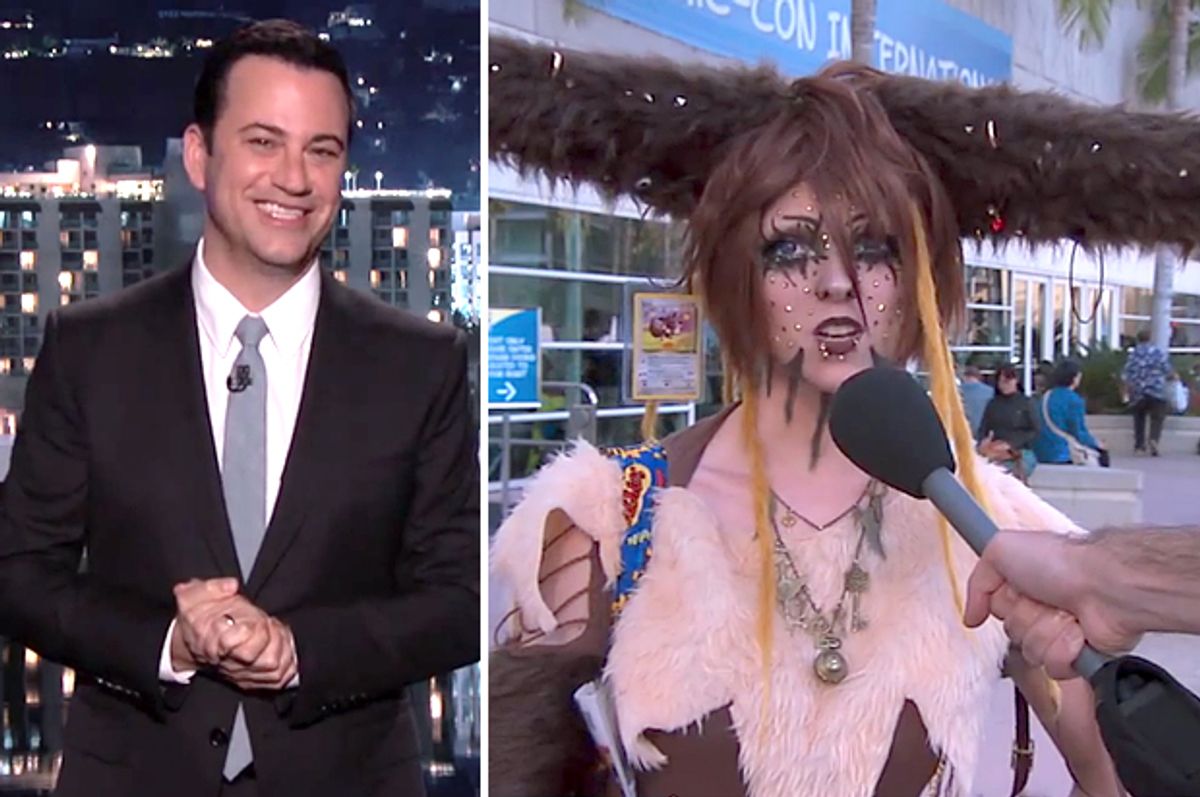 Jimmy Kimmel has carved out a space for himself on ABC with a certain kind of fratty bonhomie that extends to his celebrity guests and to his studio audience -- but not to regular people out there in the world. The joke is often that normal Americans are weird or gross -- as in his Oscar-night sketch in which people who tease celebrities online were mocked as fat, gross slobs.

But those folks were actors; in his man-on-the-street interviews, Kimmel's mockery is sneakier. Last night, for instance, he sent a correspondent to Comic-Con in San Diego to ask "cosplayers" (people dressed as fictional characters) whether they'd had sex in their costumes.

There's a long tradition of civilians being a part of late-night bits, from Jay Leno's "Jay Walking" to David Letterman's "Stupid Human Tricks." But the cosplayers of Comic-Con seemed somehow less in on the joke than their predecessors. (One, for instance, said he stopped mid-coitus to make sure his superhero costume didn't rip.) Leno's segment in particular always seemed to make the point that none of us really know all that much, do we? Kimmel, meanwhile, seems to be assuring us that we are lucky not to be these lame-os, especially when he asked the audience whether they thought a young man in Transitions lenses and an apparent Jedi robe had ever used the Force, as it were. "Do we even have to ask?" chortled Kimmel.

Both Jimmy Fallon and Jimmy Kimmel, the two more recent additions to the 11:35 time slot, have defined themselves and their celebrity guests as a sort of club -- Fallon by enlisting his guests to perpetually up the entertainment ante with new karaoke performances or comedy sketches, Kimmel by turning Hollywood's gaze out at America, where he doesn't like what he sees. Fallon doesn't acknowledge that there's anyone who could possibly hate on a celebrity, while Kimmel harnesses this hate with his recurring "Celebrities Reading Mean Tweets" segment -- where the joke is basically: Who do you nobodies think you are?

Kimmel is a likable and talented late-night host, but his man-on-the-street interviews often feel like a missed opportunity. Billy Eichner of "Billy on the Street" is never afraid to telegraph when he thinks someone is weird, but he somehow manages to find people who are able to hold their own against his acid sense of humor. And at Comic-Con, he would surely have delved a bit deeper into why these people dress as the Joker or a Jedi Knight before going for the jugular. In general, the best man-on-the-street bits give the viewer a sense of why this regular person is worth interviewing. Amy Schumer is a particular pro at them, showing real curiosity about the love lives and quirks of the people she meets, often splicing in clips of the same interview throughout her show so that these brief, random cameos come to feel like recurring characters. But Kimmel doesn't bother to pretend to be interested in the non-celebs he interviews at all.