"Get on Up" can't contain the brilliant, arrogant, and magnetic Godfather of Soul 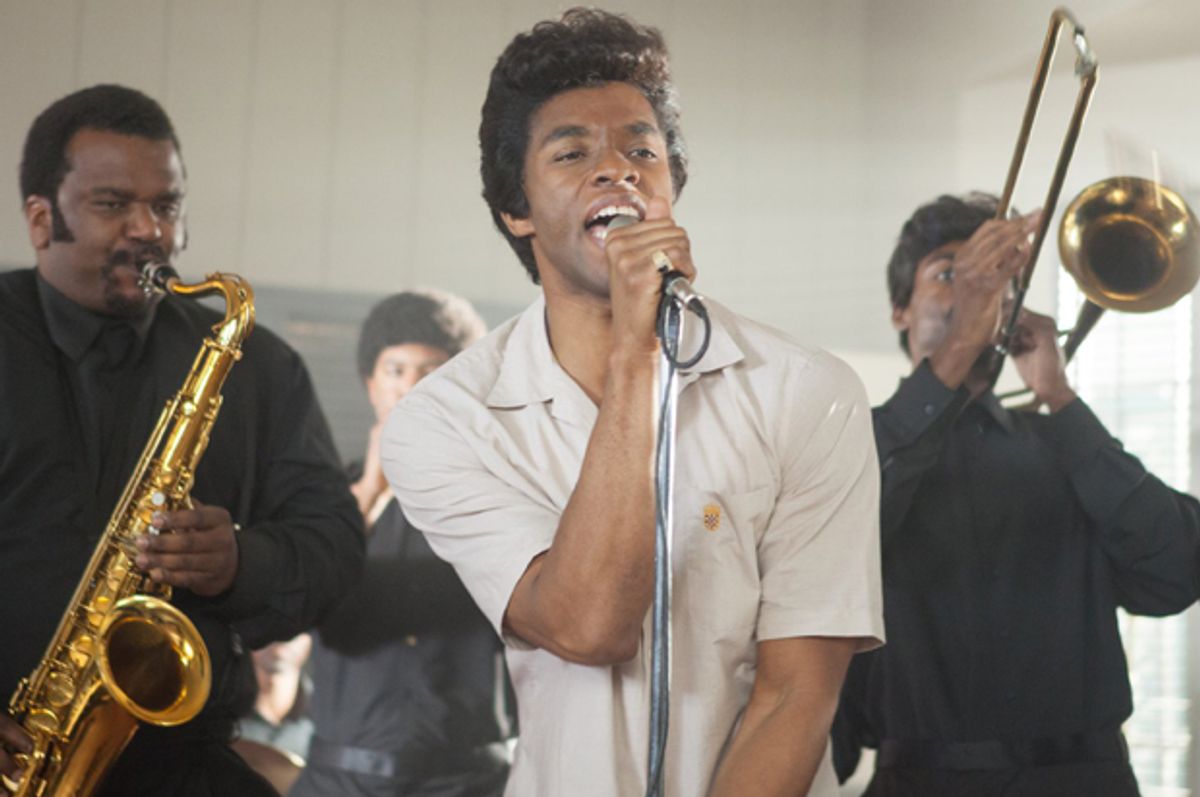 If George Clinton, some years later, would salute “One Nation Under a Groove,” he would have enthusiastically agreed that James Brown was that nation’s George Washington. Like the Father of Our Country, James Brown conceived and executed a revolution with far-reaching effects, although it was not the revolution’s leading theoretician. If Washington set us free from Mother England, in the conviction that better things would follow, James Brown set your ass free from that chair, and opened your mind in the process. "James Brown is a concept, a vibration, a dance," the man himself reportedly said. "It's not me, the man. James Brown is a concept I created for humanity."

Like Washington, James Brown had his secrets and contradictions, only some of which are addressed in director Tate Taylor’s highly enjoyable if ultimately conventional biopic, “Get on Up.” There’s more than enough good stuff to make “Get on Up” watchable: The subject matter is endlessly fascinating, the music is tremendous (it was supervised by Mick Jagger, one of the film’s producers, and we’ll get back to him) and Chadwick Boseman’s performance as the brilliant, arrogant and magnetic Godfather of Soul may cause theater screens coast to coast to spontaneously catch fire, split their pants at the seams and give up the funk. (After playing Jackie Robinson in "42," Boseman has now portrayed the two most important African-Americans of the 20th century who aren't Dr. King. He isn't playing King next; reportedly he's playing the Egyptian god Thoth.)

You almost get the feeling that Taylor is trying to address the racial controversy that broke out over “The Help” (and scotched that movie's Oscar chances) by proving that he can make a movie about African-American characters that isn’t covertly about the struggles of white people. The rich and deep cast arrayed around Boseman is almost entirely black, from Nelsan Ellis and Craig Robinson as Brown’s most famous bandmates to Jill Scott and Aunjanue Ellis as his romantic partners to brief roles for Viola Davis and Octavia Spencer and an impressive cameo by Brandon Smith (of the Disney Channel’s “So Random!”) as Little Richard. Dan Aykroyd, as Brown’s longtime manager Ben Bart, is pretty much the only white person who gets to talk in this movie (and Brown doesn’t necessarily listen). This also may be screenwriting duo Jez and John-Henry Butterworth’s way of addressing a signal fact about Brown’s career, which is easy to forget now that his hits are ubiquitous frat-party material: He rose to stardom almost entirely on the backs of black radio stations and black record-buyers, and didn’t have a significant white audience in the United States for many years.

So there are ample reasons to like “Get on Up,” and if you have even a passing interest in how James Brown transformed pop music and pop culture, you’ll never begrudge the price of the ticket. It begins with a bit of Southern-fried sizzle, in the form of a notorious 1988 incident when a coked-up and semi-coherent Brown shot up his own office in Augusta, Georgia, with a shotgun and then led the cops on a “Dukes of Hazzard”-style chase in his pickup truck. That illicit energy cannot quite be sustained, and “Get on Up” ultimately cannot avoid the symptoms of biopic disorder, in which a crude form of psychological realism is combined with the story of the New Testament. We’ve all seen these movies, dozens of times: Lives are presented as a linear chain of cause and effect, of A leading to B and every trauma contributing to an eventual triumph that was, of course, already written in the stars. It’s like a collaboration between John Calvin and Sigmund Freud, after they’ve been sniffing glue with the Ramones.

Of course it’s emotionally effective when we see Brown as a literally shoeless child in the backwoods of rural Georgia, abandoned by his mother (a thankless role for Viola Davis) and abused by his father (the reliably excellent Lennie James). That doesn’t stop it from feeling like paper-thin back-story material from a “Behind the Music” special. I kept waiting for Morgan Freeman to step out from behind a pine tree, wearing a nice suit, to tell us that Only One Thing sustained this child reared in Dire Poverty in the depths of the Jim Crow South: His Love of Music. I suppose everyone told Taylor and the Butterworths that you need that kind of explanatory material, but the thing about Boseman’s performance as Brown is that, no, you really don’t. The way he does the electrified-rooster strut even when he’s feeling uncertain, the way he cocks his head sideways and sizes people up, the way he seems to channel a musical force that’s in the earth or the atmosphere and compress it – those are the only explanations you need. Lots of people are born into poverty, and some of them have the drive to transcend it. Only one became James Brown.

Sometimes the folded-time gambit in the Butterworth brothers’ screenplay, which hopscotches back and forth through Brown’s childhood, teen years and adult life, pays unexpected dividends. I loved the slightly surreal moment late in the film when we see Brown at age 9 or 10, against the central Georgia swampland, uttering the adult Brown’s most famous catchphrase: “I paid the cost to be the boss.” In its better moments, “Get on Up” tries to explore the real question beneath that boast: What was the price involved in this kid’s improbable rise from, yes, poverty and segregation to become a musical revolutionary, one of the most influential entertainers of the 20th century and a powerful symbol of black pride and black progress? While the film alludes to the history of drug abuse, domestic violence and financial misdeeds (some of them plausibly his own) that dogged Brown’s career, those things come up as speed bumps on the road to glory more than fundamental contradictions. One manifestation of biopic disorder is that you can’t risk losing the audience’s sympathy.

No doubt when the Butterworths (also the writers of “Edge of Tomorrow” and “Fair Game”) cooked up the idea of having Brown occasionally break the frame and address the viewer, it seemed like a terrific way to provide a little narrative context and distance. Now, I imagine it’s coincidental that Marshall Brickman and Rick Elice’s screenplay for Clint Eastwood’s “Jersey Boys” uses exactly the same device, but that makes it seem less like a genius move than an infectious biopic meme that has escaped containment. One screenwriter invention I quite enjoyed is the late-night burger-stand conversation between Brown and Little Richard (Smith), after they cross paths at a gig somewhere on the chitlin circuit. It’s long been part of the Brown legend that Little Richard saw his potential and gave him advice, but I can find no record of what they supposedly said to each other (although Little Richard is still alive and may have been consulted). What’s daring about the scene is, first, that Brown isn’t outraged or threatened by Richard’s obvious homosexuality, and second, the idea that the substance of the conversation was about taking care of business in an industry controlled by the white man.

If “Get on Up” cannot entirely capture the intensity of Brown’s live performances, that’s because a typical Brown concert lasted longer than this movie (and left the audience drenched in sweat and liable to go home with someone different than they arrived with). But Mick Jagger understands Brown’s importance as both a consummate showman and a musical innovator who permanently altered the focus of pop music away from songwriting and melody and toward rhythm, harmony and pure sound – toward the groove, in other words. Brown was not being entirely metaphorical when he told his bandmates that they were all drummers, whether they were playing horns or guitar or piano. So while Brown’s complicated trajectory as a cultural and political figure gets short shrift in “Get on Up,” his music does not – the sequence depicting his legendary “Fever in the Funkhouse” show in Paris in 1971 is an absolute knockout, worth the price of admission all by itself.

Maybe somebody needs to make a deep-focus documentary about James Brown, or write a critical biography, to address all the stuff that isn’t in here. For that matter, it’s legitimate to ask whether Spike Lee or Lee Daniels or Ava DuVernay might have been more willing to explore the uncomfortable areas of Brown’s life and career than a white director, even one with the most honorable intentions. Brown’s controversial decision to play for U.S. troops in Vietnam in 1968 provides an exciting action scene, for instance, but is never mentioned again. The same artist who recorded “Say It Loud – I’m Black and I’m Proud” and who played a central role in calming the African-American community’s anger in the wake of Martin Luther King’s assassination went on to support Richard Nixon and Ronald Reagan. The boy who was born and raised in the segregated South had a long and implausible friendship with the notorious Sen. Strom Thurmond of South Carolina, once a segregationist presidential candidate. James Brown represented the Washington current in American life – meaning both George Washington and Booker T. Washington. “Get on Up” is plenty entertaining, but it can’t possibly contain him.