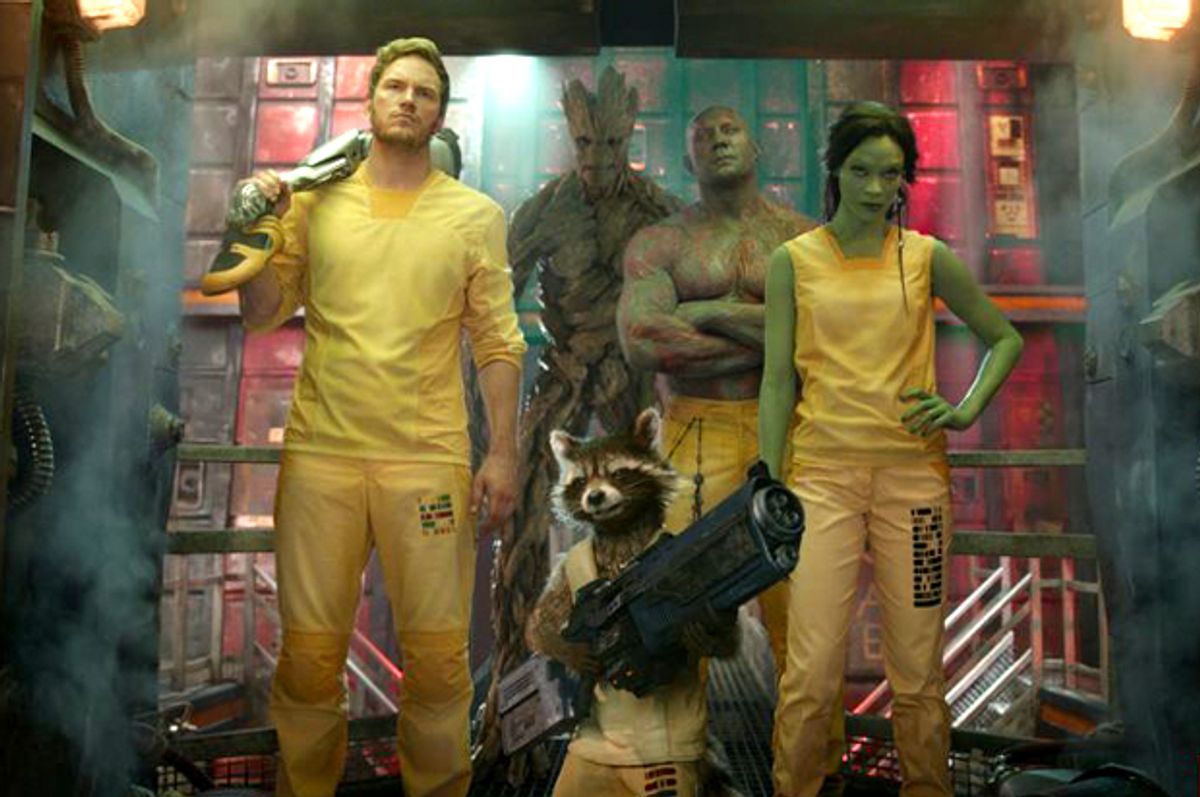 Once upon a time, the combination of lighthearted whimsy and extreme violence was nearly unknown in popular culture. Of course I am speaking of the bygone days of Charlton Heston and Moses and Charlton Heston as Moses, the incomprehensible era known to historians and other boring people as BTE – before the Tarantino era. These days, Quentin Tarantino himself is pretty much a moralistic old fogey, compared to the casualness of mass death in most popcorn-spectacle movies. I can already hear the intoxicated fans of Marvel’s new candy-coated, sugar-frosted sure-fire hit, “Guardians of the Galaxy,” spreading their palms in mystification and demanding, “Violence? What violence?” Which in a funny way is precisely the point.

Countless numbers of people and humanoid aliens and cyborg-thingummies and small reptile-like critters get wasted in “Guardians of the Galaxy,” which depicts an interplanetary war of annihilation on a scale that makes Hitler look like a sensitive girly-man out of some Nicholas Sparks novel. But no, it doesn’t read as a violent movie at all, at least by contemporary standards. It’s a high-spirited, swashbuckling lark driven by cartoonish special effects and an ingenious double-layered nostalgia that allows it to become a virtual mixtape of ‘70s hits that predate its intended audience: “Hooked on a Feeling,” “The Piña Colada Song,” “Fooled Around and Fell in Love,” etc. (Although I don’t buy for a second that the person who supposedly put those songs on a mixtape in 19-whatever even knew about David Bowie’s “Moonage Daydream” or the Runaways’ “Cherry Bomb.”)

Amid the slaughter of entire planetary civilizations, I guess it’s no wonder that the raffish band of misfits at the center of this movie pay no attention when their takeoffs, landings and battles take out random civilians by the carload. This is a recent trend in action movies, and I don’t quite know whether to call it callous or realistic: the depiction of widespread collateral damage, but without any reflection or consequences. The only deaths that make an impression on the Guardians are the long-ago killings of the wife and child of Drax the Destroyer (Dave Bautista), a tattooed mountain of he-man humanoid who is among their number. Drax is an immensely enjoyable character who pulls a disproportionate number of this movie’s laughs, a fierce warrior with a thesaurus-scale vocabulary who is incapable of understanding metaphor. “Nothing goes over my head!” he proudly announces. “My reflexes are too fast. I will seize it.” But the fact that Drax is driven by profound personal loss, yet doesn’t seem to notice the carnage all around him, suggests the truth of Stalin’s maxim that one death is a tragedy, but a million are a statistic.

I’m not actually suggesting that “Guardians of the Galaxy” would be a better movie if it were all mournful and serious and death-obsessed. Zack Snyder’s “Man of Steel” wore that approach out to the point of ridiculousness, with Superman astride a Killing Fields-style mountain of skulls. I’m just pointing out a paradox that’s baked into this kind of movie and can’t be gotten out of it. When I say that “Guardians of the Galaxy” embodies a kind of primitive or juvenile fascism – the essential ideology of the comic-book hero -- I’m not claiming that the movie’s no fun or that I didn’t enjoy myself. If fascism were boring, people wouldn’t be so drawn to it! Furthermore, I’m not claiming that director James Gunn and co-writer Nicole Perlman are secret Dick Cheney fans or that the movie’s really about war with the Muslim world or whatever. I’m saying that this amiable Robin Hood fable about a ragtag bunch of indestructible renegades who join forces to combat evil rests on an outrageously exaggerated version of teenage narcissism, and on deeply ingrained American-movie ideas about individuality and mortality and power and death. The lives of individual Cool People are worth more than millions of boring and ordinary people, violence and war are a form of ritual purification, and a sufficient amount of awesomeness will render you immortal. To die would be an awfully big adventure, as Peter Pan once observed – but we all understand that Peter Pan cannot die.

There may be another kind of friendly fascism at work here too, but let me at least try to say some nice things first. I realize that there’s no way to mollify the devotees of the Marvel movie universe, who not only demand total box-office domination (which they’re definitely going to get, at least this weekend) but also total toadying subservience to the tide of Irresistible Marvel Fun. First of all, it’s not my job to make people feel better about liking something that is really, really popular. There are a whole lot of places you can get that, and honestly that desire for universal affirmation is kind of bizarre. Secondly, I enjoyed this movie. Within limits. It’s a largely successful franchise-launcher that’s goofier and more freewheeling than most Marvel fare, maybe because it originates in an especially obscure corner of the comic-book universe. Gunn, who directed the memorable genre indies “Super” and “Slither” and wrote Snyder’s “Dawn of the Dead,” graduates to the Hollywood big time with considerable style. He keeps the zingers coming fast and furious, does OK with the action scenes given that they’re basically just computer animations and that nobody expects actual coherence, and supplies an array of mostly agreeable supporting characters.

Mind you, I didn’t enjoy it enough that I will ever want to sit through it again. Partly that’s because the genetically engineered talking raccoon voiced by Bradley Cooper, who plays the comic sidekick to Peter Quill (Chris Pratt), the rakish matinee-idol human hero, is so irritating I yearned to run him over with my space SUV, and then back it up slowly to make sure he was well and truly squished. And then there’s Zoe Saldana, giving a game enough as a green-tinged alien Amazon who turns against her evil alien adopted dad because – well, I never really got that part, honestly. You have to wonder if she’s going to get tired of playing hot science-fiction chicks with weirdly colored skin. On the other hand, Vin Diesel plays a tree, and I’ve got nothing but love for that tree. It’s a talking tree. A talking, ass-kicking tree whose only line, ever, is “I am Groot.” I could decide to have a problem with the fact that Groot is supposed to be a peaceful, life-loving tree who abjures violence until he decides to kill a whole bunch of people. But I think I made that point already, and with Groot a folk hero is born. (If this franchise really takes off, I’ll be tapping my toes impatiently for the Drax-Groot spinoff movie.)

Pratt’s Quill, also known mockingly (but not mockingly enough) as “Star-Lord,” is meant to be a cheerful, self-deprecating rogue but is actually kind of a drag. He was abducted from Earth as a little boy in 1988, right after his dying mom gave him the ‘70s mixtape – see? Nostalgia for her lost youth, not his – that becomes his most prized possession and the movie’s soundtrack. Gunn seems to realize that we’re better off not focusing much on the official plot of “Guardians of the Galaxy,” which involves an interlocking passel of villains I couldn’t begin to explain, a galactic treasure hunt for a MacGuffin-like orb that contains a universe-melting substance (Quill observes that it has an “Ark of the Covenant, Maltese Falcon vibe,” a funny line but an utterly implausible thing for him to say), and outer space locations that include a mining outpost inside the severed head of God. You think I’m kidding about that, don’t you? So we get to space out in a moonage daydream and pretend to like piña coladas, while Marvel Comics uproots all our own memories and our memories of our parents’ memories – all those summers at the lake house and kisses behind the gym and Christmas dinners with Grandpa before he had that heart attack – and replaces them with a wiseass undead raccoon.