Bloody coups may now be practically unthinkable, but experts say the risks to democracy are real 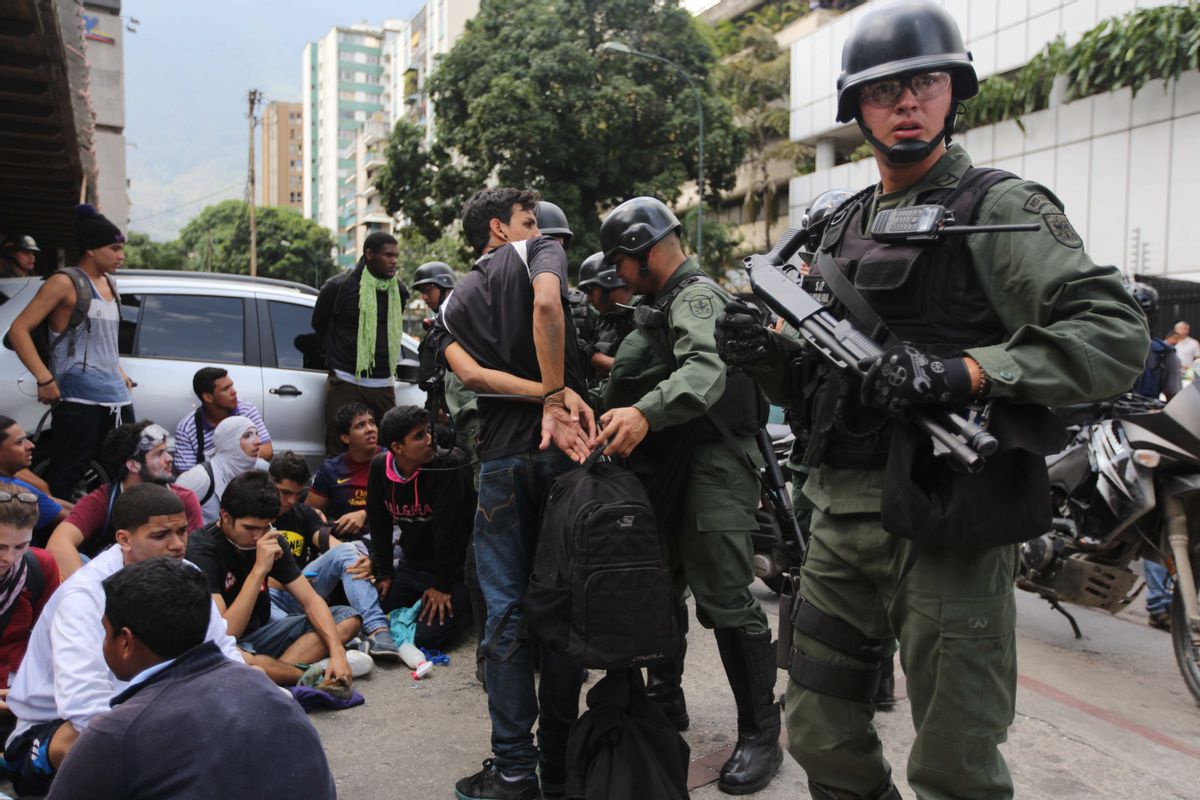 An anti-government demonstrator is handcuffed after he and others where detained by the Bolivarian National Guard, during clashes at a protest in Caracas, Venezuela, Wednesday, May 14, 2014. (AP/Fernando Llano)
--

Since then, democracy has put down roots in the Americas to such an extent that few expect a repeat of the bloody coups that frequently punctuated the region’s history.

But now, across Latin America, the military is flexing its muscles once again and taking on more central roles in society, including in ways that experts warn are posing subtler risks to constitutional rule.

The most obvious way is the armed forces’ increasingly upfront participation in crime fighting, with the public, media and politicians demanding a “mano dura,” or firm hand, against rampant street violence and ruthless drug cartels.

In some countries, like Venezuela, many even view the military as a potential arbiter when a president appears to lose control of his or her country.

Expenditures are also mounting, with Argentina, Brazil, Chile, Colombia and Mexico upping their military budgets by more than half from 2006 to 2012. Even if total 2013 Latin American and Caribbean military spending, at nearly $69 billion, was just one-tenth of the Pentagon’s budget, it’s still big money for the region.

One of the spurs has been Washington’s “war on drugs.” It’s the countries along the cocaine route from the Andes to the United States that have most deployed their armed forces to fight the heavily armed cartels. The US government shells out billions to better equip those countries for the task.

Machine-gun-toting soldiers patrolling city streets are now a common site in many of those nations.

From Peru to Mexico, the results of militarizing the drug war have been bloody, with the military implicated in human rights abuses, even as the drugs continue to flow across and around the Rio Grande.

Even in Argentina, the military is now, reluctantly, being used to police the borders with Paraguay and Bolivia to stop traffickers.

That’s a surprise given how traumatized the country was by the thousands of dead and disappeared during its dictatorship and the Falklands War with Britain. Since returning to civilian rule in 1983, Argentina has traditionally taken a strong stand against using the military for anything other than strictly defense purposes.

“Militaries are trained for warfare, for combat, and most internal security tasks don’t require that training,” says Maiah Jaskoski, an expert in Latin American civil-military relations at the US Naval Postgraduate School in Monterey, California.

“What happens to your war-fighting capacity when you are now a crime-fighting security force? Is that the best way to keep the military ready for combat?”

Alfredo Forti, who heads the Center for Strategic Defense Studies (CEED), a Buenos Aires think tank, adds: “The military is trained for armed conflict, not policing. Why not strengthen the police instead?”

“These are steps that are very hard to reverse. It is a risky tendency. Sooner or later it will end up politicizing the armed forces and weakening the police.”

Mexico may be the best-known example of using the armed forces to confront drug cartels. During Felipe Calderon’s 2006-2012 presidency, the death toll hit 60,000.

But the military has no shortage of champions, with many citizens fed up with allegedly corrupt and inept civilian police forces unable to tackle the crime wave.

“They [the Mexican military] have a 70 percent approval rating,” says Raul Benitez, a professor at the National Autonomous University of Mexico. “People want them in the streets. They feel protected.”

Across Latin America, public approval of the military averages at 39 percent, according to one 2011 study — but that was higher than the ratings for police and lawmakers.

Yet the perception of the military as immune to graft is a huge mistake, Jaskoski warns.

“There has been this view that the military somehow cannot be corrupted in the way the police can,” she says. “That is just ridiculous.”

She cites the massive corruption that pervaded all ranks of Peru’s armed forces during the Alberto Fujimori administration’s 1990s drug wars.

Meanwhile, behind the scenes, Latin American militaries are often far more independent of civilian control, including with opaque budgets, than would be acceptable in the US or Europe.

Although military coups now seem unlikely, the prospect of generals or admirals discreetly supporting the ouster of a president by another civilian remains a possibility. That’s what some experts suspect took place in Honduras in 2009 and Paraguay in 2012.

Venezuela may be the next country at risk. It’s been wracked by a deep economic crisis and often violent anti-government unrest since the death of President Hugo Chavez.

Some senior military officers are reported to be distancing themselves from Chavez’s struggling successor, Nicolas Maduro.

Maduro’s had more than a dozen officers arrested this year, accusing them of coup-mongering — but has failed to publicly provide any evidence.

Chavez, a former tank commander who led a failed 1992 coup, also weeded out officers suspected of harboring opposition loyalties during his 14 years as president. More than 1,600 Venezuelan military officers have been appointed to senior government posts since 1999.

But now the biggest threat to Maduro likely comes from within the political movement he inherited from “el Comandante.”

“The military is very much a supporting actor. They would at least have to acquiesce,” says Harold Trinkunas, a Venezuela expert at the Brookings Institution in Washington, DC.

CEED’s Forti, a former Argentine deputy defense minister, adds: “In Venezuela, the risk is not of a coup but more about the political actors struggling for control. The debate is not taking place in the garrisons.”

Meanwhile, years after the brutal — and frequently US-backed — military dictatorships that ruled much of South America into the 1980s, justice appears further away than ever for victims of the unresolved rights abuses of that era.

“[The 1998 arrest in London of] Pinochet was huge. But the energy and focus on keeping officers accountable has been lost,” Jaskoski says.

“As the officers have aged and retired, there is also a public perception of them as elderly men rather than as alleged human rights offenders. The appetite to put them on trial has waned.”

But with that attitude, it may not be just the old guard that’s benefiting, and the risk of new authoritarian abuses by the military could be making a quiet comeback.