Why are conservatives so annoyed by Neil DeGrasse Tyson? Because, you know, science 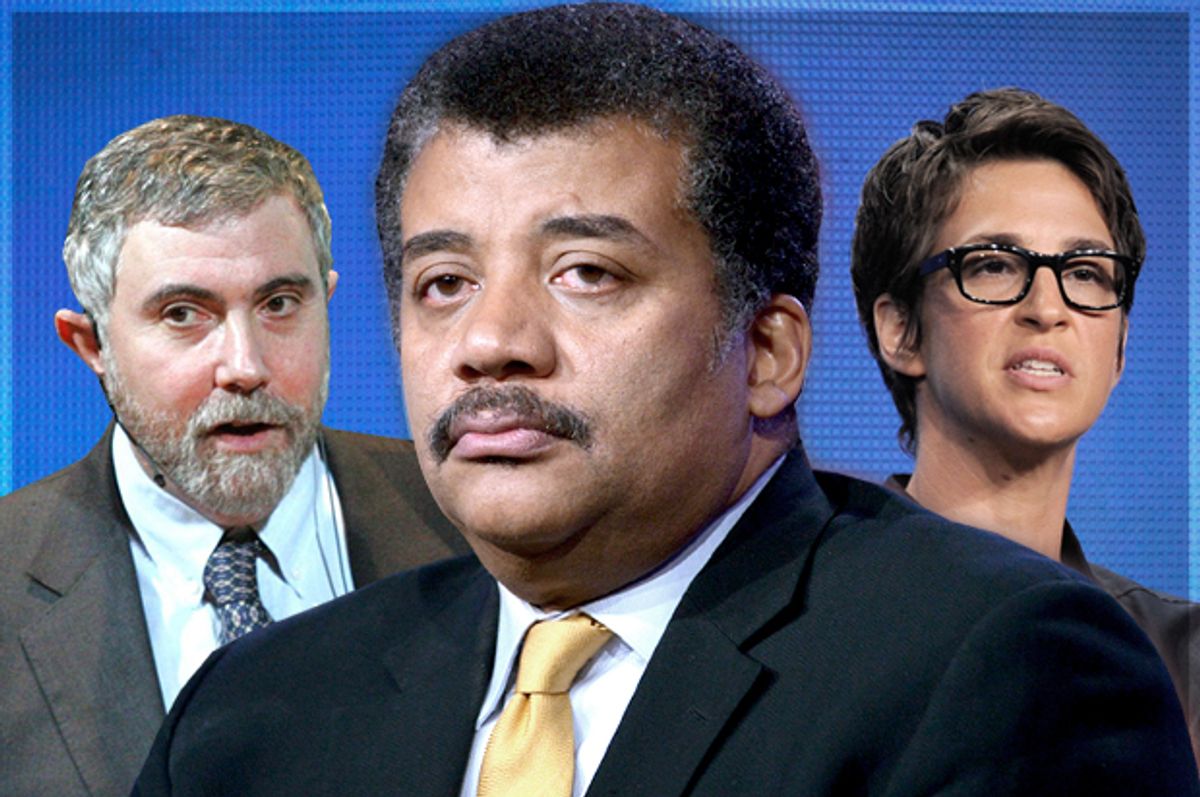 If you prick a nerd, does he not bleed? If you wrong us, shall we not revenge? Like fire ants boiling out of their underground lair, overcome with rage at whatever dastard disturbed their slumber, nerds everywhere are taking to the streets, apoplectic at the most foul attack on entitled smarts this nation has seen since Dwight D. Eisenhower called Robert Oppenheimer a pencil-necked geek.

OK, I don't actually have a link for that Eisenhower thing. Maybe it didn't happen. But I do have a link for National Review's cover-story assaulting nerd-dom, "Smarter Than Thou." A cover story that begins by attacking none other than Neil DeGrasse Tyson -- the Holy Roman Nerd-Emperor himself! -- as the "the fetish and totem of the extraordinarily puffed-up 'nerd' culture that has of late started to bloom across the United States."

Oh boy, them's fightin' words. I can tell you, nerds are spitting mad. They've got the torches and pitchforks ready to hand. They're going to burn some shit down!

Well, actually, probably not. What they're really going to do is craft some sarcastically amusing tweets, because you know, they're nerds. That's how nerds roll. And maybe they'll write a clever smartphone app that can be deployed to mock people who don't accept the science of climate change. Because, contra National Review's Charles Cooke, who seems to believe that the new primacy of the nerd is some kind of collectivist scam by Ezra Klein and Nate Silver and Rachel Maddow and "anybody who conforms to the Left’s social and moral precepts while wearing glasses and babbling about statistics," the cultural ascendancy of the nerd has nothing to do with who wears horn-rims on TV and everything to do with the massive technological transformation of society over the last 20 years. Nerds used to be 90-pound weaklings who never got the girl. Then nerds built the Internet and personal computers. Now nerds rule the world. Or at least, that part of it that isn't controlled by retrograde politicians. The primacy of nerd culture is not an Ezra Klein affectation; it's fallout from the fact that nerds are making an awful lot of money these days.

Cooke, after leading off with Tyson, fatally exposes his hand by defining the leaders of the new nerd menace as a group that, oddly, all share politics that National Review doesn't approve of.

Later, Cooke says that "the nerds of MSNBC and beyond are not actually nerds — with scientific training and all that it entails — but the popular kids indulging in a fad." I'm not sure it's all that smart to attack the likes of Dawkins or Krugman, (or even Bill Nye, a mechanical engineer who worked for Boeing) as lacking scientific training. But Cooke's real problem is that the "real" nerds -- the ones that aren't on MSNBC, also, by and large, share the political beliefs he scorns.

Cooke never mentions Silicon Valley, which is odd, because the fact that the world's greatest preponderance of nerds also happens to be the United States' most formidable bastion of left-wing progressive politics would seem to support his thesis that nerds are pinkos. (And yes, I know, there are a lot of libertarian nerds -- but guess what, those guys believe in science too!) There's a reason for Cooke's omission. Acknowledging that nerds -- you know, the guys and gals who invented the microchip and the PC and the smartphone -- actually do have a grasp of scientific fact, which leads them to take seriously the problem of historically unprecedented carbon dioxide emissions and the idiocy of rewriting school science textbooks to include dogma about creationism and intelligent design, is a disastrous dead end for conservatives.

If Cooke honestly wanted to grapple with the cultural cachet of nerd-dom, he'd have to answer questions such as why a poll by the Pew Research Service found that in 2009 that only six percent of scientists identify as Republican. He'd have to grapple with the true reasons for Tyson's popularity, which have much more to do with how grateful a significant portion of this nation is for someone who can rebut ignorance and religious propaganda with humor and clarity than with any political identification. He'd have to face up to the sobering reality that the majority of people who understand how the world works in terms of biology and physics and mathematics also think that our overheating globe is a serious problem.

Instead, Cooke argues that leftists are embracing the nerd-designation because it says to the world what they are not: "... which is southern, politically conservative, culturally traditional, religious in some sense, patriotic, driven by principle rather than the pivot tables of Microsoft Excel, and in any way attached to the past."

But this thing about attachment to the past -- well maybe Cooke's got a point there. Nerds love science fiction, in part because we love the promise of the future, a promise of Star Trek abundance and material prosperity for everyone. We look at the past, at centuries that included slavery and child labor and infant mortality and Inquisitions and the lack of female suffrage, and we think, we can do better than that. We can progress.

That's why we like Neil DeGrasse Tyson. Because we believe that civilization is going somewhere, and that if the future isn't better than the past, then we're just wasting our time on this planet.