For a show that mocks American marketing strategies, its entrepreneurial tips sure seem to work pretty well 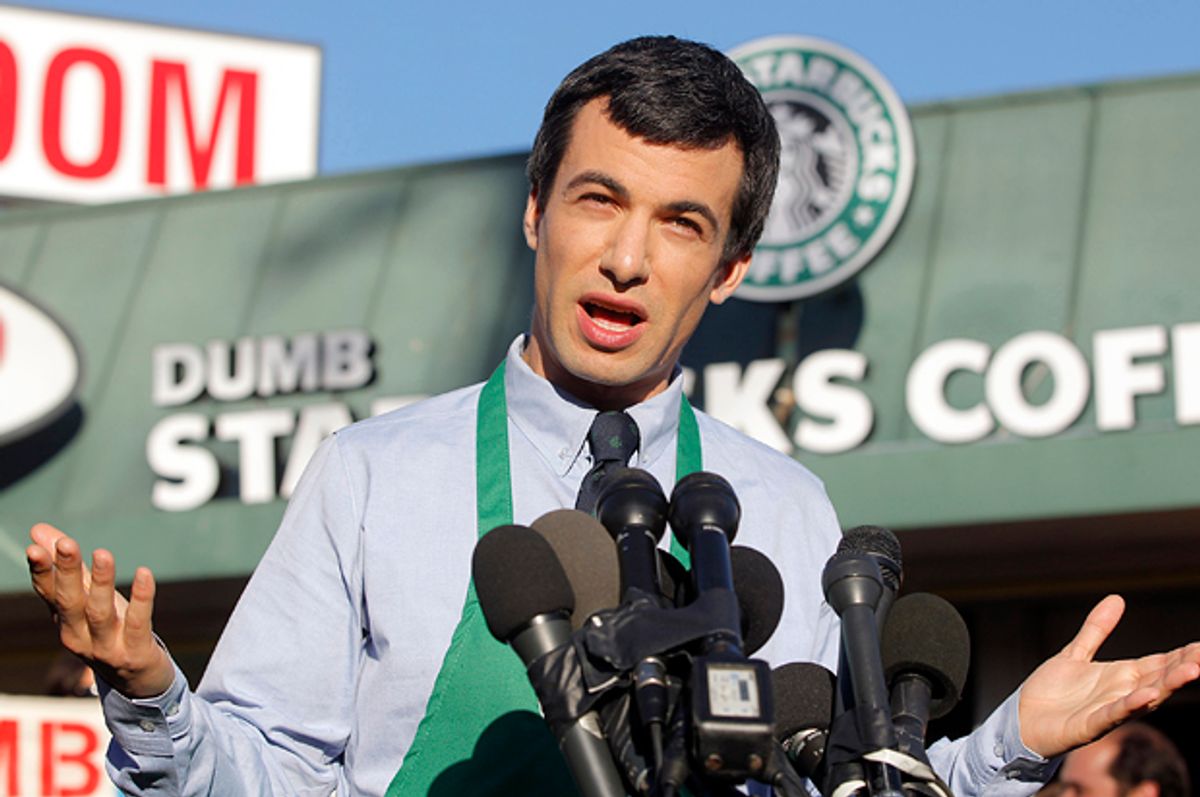 Nathan Fielder of "Nathan For You" (AP/Nick Ut)
--

I love Comedy Central’s “Nathan for You.” I love the way its star, comedian Nathan Fielder, captures the earnest empty-talk of every marketing consultant I’ve ever met. I love that his elaborate harebrained schemes sometimes actually work. And I love the show even more after this week’s episode about the making of the viral triumph “Dumb Starbucks.”

“Dumb Starbucks” was the parody coffee shop that opened suddenly back in February in a strip mall in Los Feliz, Los Angeles. Curious customers flocked to this site in droves, waiting for hours in line to purchase Dumb Iced lattes, Dumb Frappuccinos, and copies of Dumb Norah Jones Duets.

In a matter of days, “Dumb Starbucks” became a worldwide sensation, and people quickly began speculating wildly about its origins. Many believed it to be the work of street artist Banksy (seriously, that guy gets the credit for everything), but Nathan Fielder later revealed that he was the proprietor. It was all part of a strategy he was executing for one of his “clients” on “Nathan for You.”

“Nathan for You” is a docu-reality series in which Fielder attempts to help struggling businesses get back on their feet. As a marketing consultant, Fielder is hilariously inept, offering outlandish advice with straight-faced deliberateness. The small-business owners featured on the show believe that he’s sincere, and in some ways, he is. Though Fielder makes his living as a comedian, he really did go to business school and he has also mentioned in interviews that his flat affect on the show is not too far from his actual day-to-day self.

Though “Dumb Starbucks” has catapulted Fielder into the limelight, die-hard fans of the show know that this is not the first incident in which one of his outrageous marketing schemes has actually yielded successful results. In fact, one could argue that, for a show that mocks American marketing strategies, “Nathan for You” offers some surprisingly savvy entrepreneurial advice. Watching this show has almost made me want to launch my own company just so I can put these biz tips into action.

There is literally no such thing as bad publicity.

In the pilot episode, Fielder arrives to rescue Yogurt Haven, a frozen yogurt shop that lately has been experiencing decline in consumer interest. After going undercover (i.e., wearing an unconvincing fake beard) to inspect daily operations, Fielder believes he has found a solution. He instructs the owner to do something that is not uncommon in the frozen yogurt industry: introduce a new signature flavor. More specifically, he recommends that they release a “poo-flavored” yogurt. “The media responds to controversy,” Fielder explains.

Even after a public relations expert tells Fielder to reconsider the entire campaign, he persists, and by the end of Day 1, the store is full. Full of people shuddering in utter disgust, but still, full.

Find your company’s “Shamu” (and if you don’t have one, create one).

This piece of wisdom comes from one of the show’s most iconic episodes. In order to ignite public interest in a Glendale petting zoo, Fielder stages a viral video of a pig rescuing a goat, and by the way, this one totally worked! The video was a crazy hit, making its way onto morning talk shows, almost everyone actually believing that it was an authentic video.

At the top of the episode, Fielder explains the methods behind his madness:

“People don’t go to Sea World to see a whale. They go to see Shamu,” Fielder tells the petting zoo owner. “Who is your Shamu?”

From a branding perspective, it’s important to ask this kind of question from time to time. Who is my Shamu? What is it about what I’m selling that makes people want to sit in my splash zone?

Conquer fears by attacking them head-on.

In one episode, Fielder steps away from his consultations to focus on his own personal growth, but there are still major business lessons to be learned here, naturally. He admits that he has always had a crippling fear of women, so in order to overcome his terror, he decides to date 10 women at once. To achieve this goal, he creates a fake reality show in the vain of “The Bachelor” called “The Hunk” in which women believe they are competing for his affections. After practicing his flirting skills and dodging kisses at a rented mansion, a valuable lesson is learned.

“I realized I didn’t have to do crazy stunts to get women to like me. I just had to be myself … inside of a $5,000 per night mansion with a TV crew filming me.”

Fear is the most deadly weapon when it comes to setting business or personal goals. If we could all be a little more like Fielder here, not only could our bank accounts be a little richer, perhaps our lives could too.

Don't piss off too many people on the way to the top.

In the most recent episode, Fielder originally pitches the “Dumb Starbucks” concept to the owner of a struggling coffee shop in Los Angeles. When he struggles to warm up to the concept, Fielder ends up severing ties with him, actually threatening legal action.

In the end, after all of the media hype and outpouring of community support, “Dumb Starbucks” was shut down by the Health Department, and in a manner of speaking, so were Fielder’s dreams. This caused him to take a cold, hard look at his life. He realized that he had let the attention go to his head, and in this process, he had hurt people along the way. He reflects:

“Success means nothing if the road that got you there is paved with broken hearts.”

Truer words have never been spoken … except maybe when Fielder followed it up with this:

“They say the devil is an artist, and if that’s so, maybe I [am] his greatest piece yet.”