"Calvary": A good priest takes on a poisoned church and a crazy Irish village 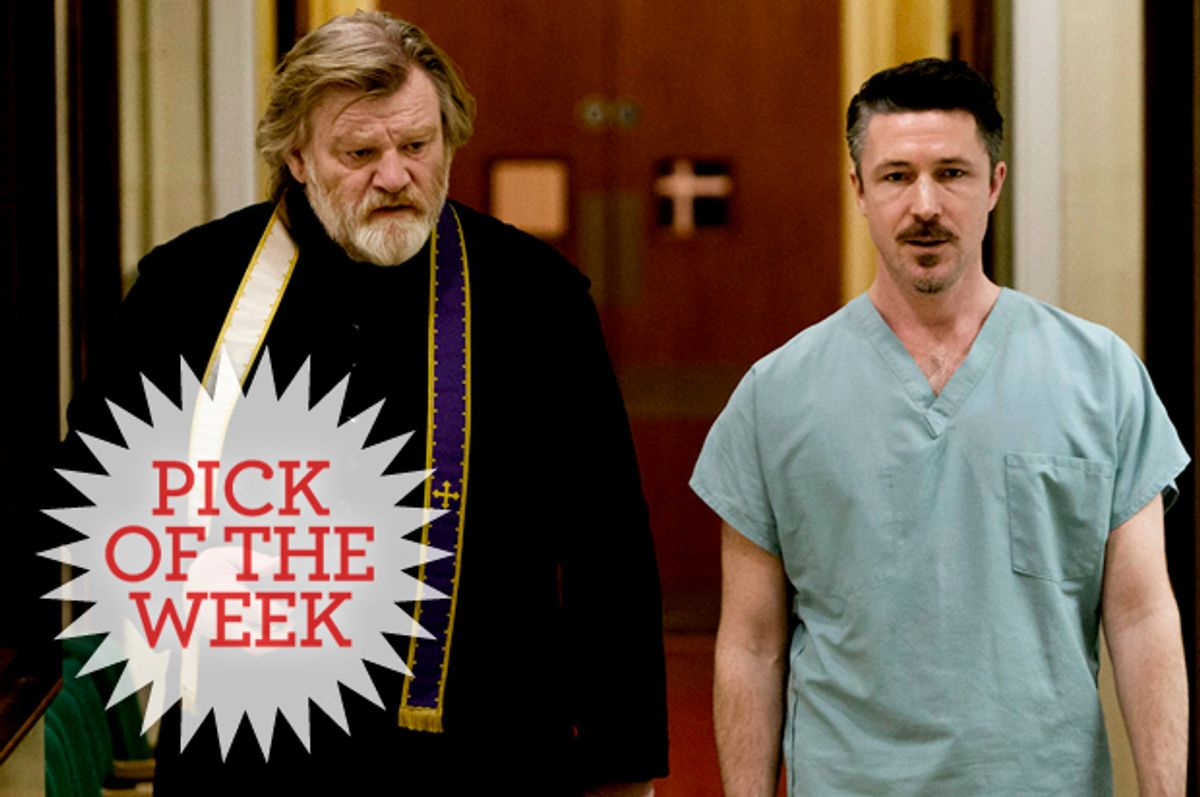 One could argue that the title of John Michael McDonagh’s film “Calvary” is a massive spoiler, all by itself. That depends, of course, on people grasping the reference, and also making sense of the way the Irish writer-director deploys it in this tragicomic parable about an honorable small-town priest facing both a fallen world and the demise of his own institution. If you saw McDonagh’s earlier collaboration with the tremendous Irish actor Brendan Gleeson, “The Guard,” you’ll have some sense of the setting and context: a remote and undeniably picturesque village in the west of Ireland, suggestive of fairy tale or old-fashioned wind-blown rural romance, but injected with the startling force of modernity. But while the tone of “Calvary” is initially similar, mixing mordant black comedy with notes of genuine human anguish, the destination is a different and much darker one.

McDonagh certainly wants “Calvary” to have some thematic resonance beyond the specific context of Ireland, but he can’t escape the fact that this thorny parable involves a double-edged view of morality, religion, human freedom and even drama that is distinctively Irish. When Gleeson’s Father James Lavelle goes for a walk on the beach with his adult daughter, Fiona (Kelly Reilly) – yes, this is a priest with a daughter; we’ll get to that – she accuses him of setting up an emotional climax “out of one of those shite plays at the Abbey,” a reference to Ireland’s national theater and its patented variety of sentimental nationalism. McDonagh could also be taking a fraternal dig at his better-known brother Martin, author of numerous plays and director of the films “In Bruges” and “Seven Psychopaths.” (Although even Martin McDonagh’s detractors would not accuse him of peddling Sean O’Casey stereotypes.)

Father James is a decent man caught in a trap not of his own devising, which I suppose is the predicament of every human being. In his case, he may literally be called upon to pay for the sins of others, but the hidden question in this story – as in the story of the person who died on Calvary – is whether we are ever entirely innocent of the sins of others, and how we know for sure. Some viewers have tried to interpret McDonagh’s attitude toward the Catholic Church from the portrayal of Father James as a “good priest,” a person of genuine faith but open mind who has never committed abuse or covered it up, and who is not involved with the corrupt hierarchy. But McDonagh is a dramatist first and foremost, and the “good priest” is a character who cuts against stereotype and a person at odds with the world, which is almost always a fruitful dramatic situation.

In the startling first scene of “Calvary,” before we see Father James’ face or anyone else’s, one of his parishioners tells him in the confessional about enduring many years of childhood rape and abuse, at the hands of a priest who is now dead. He cannot get revenge on his abuser, but he can make a violent public statement, and plans to: He will murder Father James in one week’s time, specifically because he’s a good man who is innocent of those crimes. So from the beginning, Father James faces a difficult moral situation: He has a pretty good idea who the man is (although we don’t), and his rose-sniffing bishop assures him that the seal of the confessional does not apply to a crime that has yet to be committed, and which therefore cannot be absolved. (I’m going to make a wild guess that McDonagh was educated by Jesuits, because that is some high-order theological precision.)

In “The Guard” Gleeson played a wiseass country cop (or guard, in Irish parlance) who wasn’t half as dumb as he pretended to be, and who believed it was at least as important to “take the piss” out of Don Cheadle’s straitlaced FBI agent as to solve a series of gruesome crimes. If it was tough to get to the bottom of Sgt. Gerry Boyle – to figure out where the bullshit and blarney stopped, if they ever did – Father James is exactly the reverse. He is capable of humor, exasperation and finally even rage, but he is never insincere; if anything, he could use more of the Irish talent for bluster, misdirection and embittered bonhomie. Instead, he has the courage or the stupidity to put his faith in God, and as scripture teaches us, that fella has a peculiar sense of humor.

There’s a ready explanation of how Father James could have wound up with an adult daughter – his biological child, conceived in the customary manner – without ever violating his priestly vows. I will rely on the swifter Sunday-school pupils to come up with it. Fiona shows up in Father James’ County Sligo village (I believe the actual locations used are Easkey and Strandhill) after a suicide attempt, perhaps not her first, motivated by some guy in Dublin or London. So he has a wounded bird to nurture, a potential murderer to fend off and/or confront and a variety of other parish dilemmas to wrestle with. He makes an effort to discuss the threat with the town constable (Gary Lydon), but that worthy is entertaining the town’s resident rent boy (Owen Sharpe), who affects a hilariously awful dese-and-dose New York accent, apparently absorbed from repeated viewings of “West Side Story.”

It’s not that Father James is horrified or particularly judgmental about the rampant sinfulness to be found in this tiny town set between the horizontal green land and gray seas of Ireland’s northwestern coast. I don’t know when “Calvary” was written or whether McDonagh had the example of Pope Francis in view, but this is a priest trying to deal with the world as he finds it, not stuff it back into some imaginary 1950s bottle. So the town cop patronizes a male prostitute and the cheerful local butcher, Jack (Chris O’Dowd, who was actually born in Sligo and for once gets to act with his native accent), apparently has no problem sharing his wife with Simon (Isaach De Bankolé), the African immigrant who runs the town garage. Father James doesn’t even try to untangle this adulterous knot, only to figure out whether it’s Simon or Jack who’s been beating up Veronica (Orla O’Rourke), the aforementioned wife who announces herself with suspicious enthusiasm as the town slut and cokehead.

As the week proceeds toward Sunday, when Father James’ would-be killer has made an appointment to meet him on the beach, the journey toward Calvary slides slightly – but only slightly – into the terrain of allegory, through the Garden of Gethsemane and the Stations of the Cross. If Father James were the sort of priest who looked for the devil’s handiwork, it’s all around him, and not in the form of minor sexual peccadilloes. The town’s richest man (prominent Irish comedian Dylan Moran), a sharp-suited faux-aristocrat who may be prison-bound for his role in the financial scandals that brought the “Celtic tiger” boom to a crashing halt, wants to make amends by giving money to the church, but it’s all form. He’s as soulless as a caged lizard, and neither money nor possessions nor the church nor his family nor anything else actually mean anything to him. The town doctor (Aidan Gillen) is a bitter, drug-abusing atheist who jokes to Father James that his own part in the local drama is a cliché and that the “good priest” gets all the best lines.

McDonagh walks a hazardous tightrope from scene to scene, from amiable comedy to black-hearted farce to heartbreaking tragedy, often trying to strike all those notes within seconds. It doesn’t all work equally well, but the cumulative effect is powerful. For example, a deadly serious sequence in which Father James must give last rites to an Italian tourist fatally injured in a car crash, and then provide such comfort as he can to the man’s French wife (Marie-Josée Croze), felt a bit awkward to me while I was watching it. But it grew in memory, as I realized that this newly bereaved widow, a foreigner he’s never met before and will never see again, is the only person in the story who actually wants Father James to do his job. Everybody else just wants him to shut up and go away (if not to literally die), and given what Ireland and the church have been through together, you can’t entirely blame them.

Father James has his faith sorely tested long before he gets to that Sunday date with destiny on the strand. The village publican wants to know why the priests want to talk so much about abortion and sex. In one scene, he makes small talk with a young girl on her way to the beach, and then must confront her father’s outraged reaction: “What were you saying to her?” Father James breaks down in tears, as if he has noticed for the first time that no parent will ever view him as trustworthy (and probably shouldn’t). Then he visits a convicted serial killer in prison (a brilliant cameo for Domhnall Gleeson, Brendan’s son) who yearns for penitence and salvation, and there it’s as if he is facing for the first time the human impossibility of the Christian doctrine that all sins, no matter how heinous or how often repeated, can be forgiven. None of us actually believes that, but the moral force of religion – when it had any – was to compel us to aspire toward the impossible.

You could read “Calvary” as an argument that the world, whether signified by an Irish village or the actual world, still needs some version of what Father James had to offer, but that his specific version has passed its expiration date. I certainly do not see this wrenching, slow-burning black-comic tragedy as a defense of the Catholic Church or Christianity or religious faith in general or anything even half that specific. But it illustrates a moral or philosophical predicament that has no easy solution. McDonagh begins the film with a passage attributed to St. Augustine, who cautions us against both despair and presumption: One of the thieves executed alongside Christ was saved, while the other was damned. (McDonagh surely borrowed that from Samuel Beckett, who used it in "Waiting for Godot.") Even those who still claim to believe in salvation and damnation risk sounding ridiculous if they talk about them too much; those concepts have lost most of their power even as metaphor. But navigating between despair and arrogance remains the only decent way to live, and Father James, whatever his sins, surrenders to neither.

“Calvary” is now playing at the AMC Lincoln Square and the Angelika Film Center in New York, and the Arclight Hollywood and the Landmark in Los Angeles. It opens Aug. 8 in Boston, Chicago, Dallas, Denver, Philadelphia, Phoenix, San Francisco and Washington, with wider release to follow.