The retailer responds perfectly to a viral rant 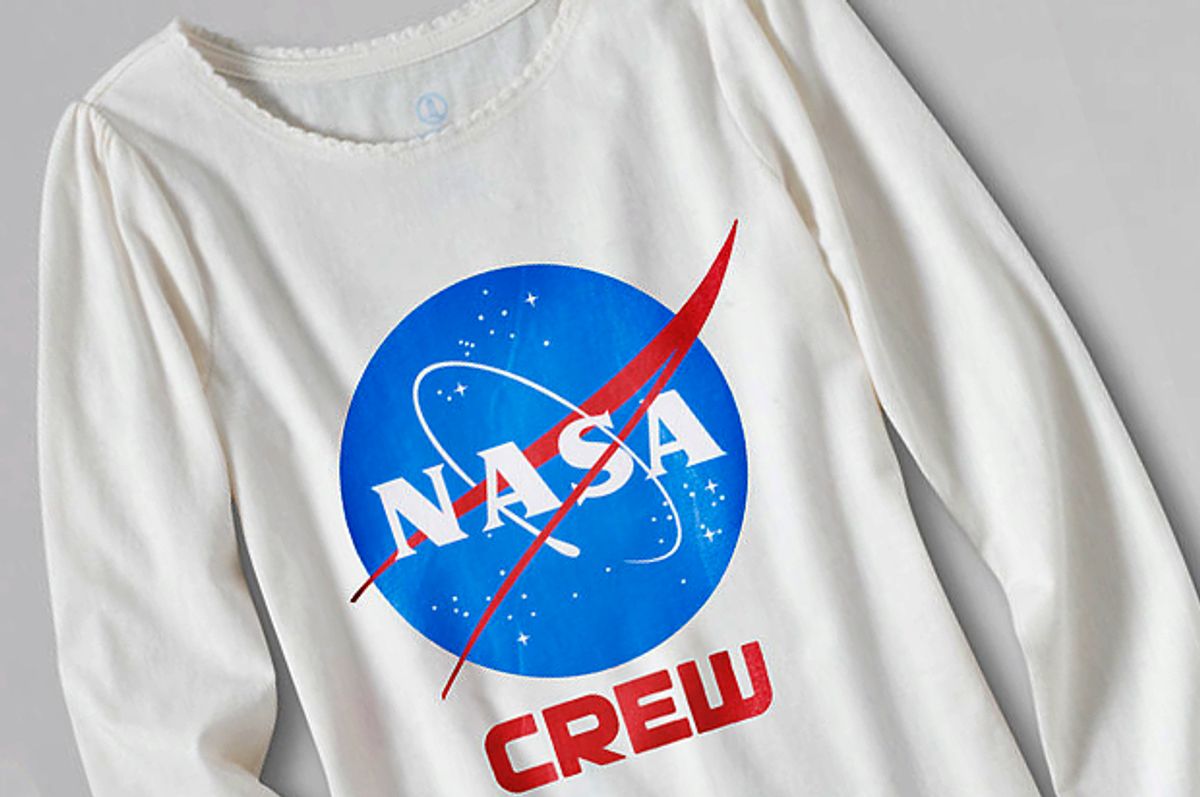 Well done, Lands' End. And nicely played with the quick turnaround too.

Just a few weeks ago, New Jersey mother Lisa Ryder penned an open letter to the retailer -- known best for its sturdy, inoffensive wares – regarding the gender disparity in its products. Her 9-year-old daughter, she explained, loves science, so she was surprised that the boys' options "include realistic images of planets and our solar system, labeled diagrams of sharks and dinosaurs, and a 'NASA Crew' tee design," while the girls' featured "sparkly tees with rhinestones, non-realistic looking stars, and a design featuring a dog dressed like a princess and wearing a tutu." And she asked, "In 2014, why are you selling 'mighty' tees for boys and 'adorable' tees for girls?" This week, she got her answer. A reasonable, respectful answer. The new science shirts are here!

Ryder's question went viral precisely because it's a variant of one parents who'd like their daughters to not view themselves exclusively as princesses grapple with on a constant basis. Three years ago, Peggy Orenstein's "Cinderella Ate My Daughter" lamented the explosion of "girl" versions of traditionally gender neutral toys, and the hazards of confining our daughters to "the pink box." But in recent years, more consumers have been pushing back against it. In 2011, the British retailer Hamleys eradicated gender distinctions for its toys, categorizing them instead by type. Last year, after a Twitter user pointed out that the U.K. retailer Boots was putting its Science Museum brand toys in the "Boy" section, a public outcry led to Boots issuing a vow of "taking immediate steps" to rectify its signage – and a promise from Science Museum that it "is committed to producing products which appeal to both genders." Gymboree was similarly called out after unveiling onesies that let girls be "Pretty Like Mommy" while boys could be "Smart Like Dad." And when Lego was challenged about its girly girl "Friends" line, the company met with members of SPARK (Sexualization Protest Action Resistance Knowledge) to discuss ways of broadening the brand to be more equitable. (Lego does, however, still insistently maintain a separate "Girls" category of shopping malls and catwalks.)

Contrasted against some of the more truly egregious examples of gender segregation in the kid world, Lands' End's original dark-colored, sequin-festooned girl shirts don't seem like that big a problem. But Lands' End still did a few more things to make things even better. First, it replied to Ryder – and all its customers – promptly, saying, "Customer feedback has, and will continue to be, of the utmost importance to us. Please be assured that we are currently sharing your comments with our Catalog Creative and Kids Design Teams." And then, within just days, it announced two new designs, saying, " You asked, we listened — take a look at our brand-new girls’ science tees. Our first two tees are live on the site — pre-order now to reserve her size (due to the quick turnaround, the shirts will ship in August). Based on your response to the tees, we will continue to add new styles moving forward." There's a dark solar system shirt – a slightly more feminine version of its boy's tee – and a simple white "NASA Crew" version. And the accompanying text is all about empowerment, promising that "Whether your girl dreams about landing on Mars, building the first faster-than-light spaceship or discovering new solar systems with a high-powered telescope, she'll agree these space tees are awesome!"

The response so far has been overwhelmingly enthusiastic – summed up by the customer who noted on Facebook, "Thanks for responding to our concern that our girls are multi-dimensional, smart children worthy of options that reflect their diversity of interests. Yay Lands' End!" And that emphasis on diversity is really the point. Should you wish to dress your girl in a pink shirt festooned in butterflies, Lands' End carries one of those too. There are still ballerinas and hearts and tiaras to be had there, and as a mom of two daughters, I am down with ballerinas and hearts and tiaras. But girls shouldn't be limited to just ballerinas and hearts and tiaras. Girls like sports and science and things with wheels on them too. When brands listen to parents and recognize that, it's a supply and demand win for everybody. And with luck, it's just the beginning. As one approving mother commented Thursday on Facebook, "Now PLEASE do some dinosaurs!"