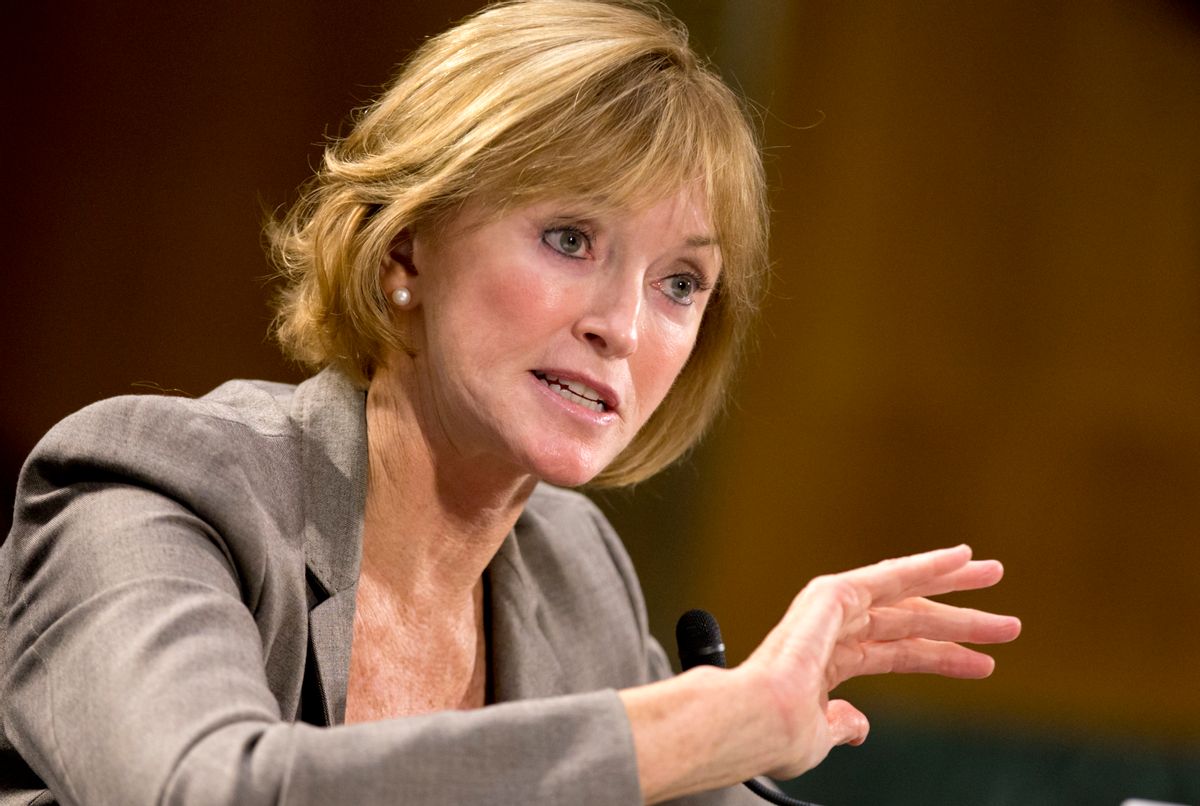 FILE - This Nov. 5, 2013 file photo shows Medicare chief Marilyn Tavenner testifying on Capitol Hill in Washington. Management failures by the Obama administration set the stage for the computer woes that paralyzed the president's new health care program last fall, nonpartisan investigators said in testimony released Wednesday. After a months-long investigation, the Government Accountability Office found that the administration lacked "effective planning or oversight practices" for the development of HealthCare.gov, the online portal to coverage for millions of uninsured Americans. The report faults the Centers for Medicare and Medicaid Services  which is part of the Department of Health and Human Services  for ineffective oversight of contracts for HealthCare.gov's computerized sign-up system and its electronic back office. (AP Photo/J. Scott Applewhite, File) (AP)
--

While the administration was publicly assuring consumers that they would soon have seamless online access to health insurance, a chaotic procurement process was about to deliver a stumbling start.

After a months-long investigation, the Government Accountability Office found that the administration lacked "effective planning or oversight practices" for the development of HealthCare.gov, the portal for millions of uninsured Americans.

As a result the government incurred "significant cost increases, schedule slips and delayed system functionality," William Woods, a GAO contracting expert, said in testimony prepared for a hearing Thursday by the House Energy and Commerce Committee. The GAO is the nonpartisan investigative agency of Congress.

Spokesman Aaron Albright said the administration takes its responsibility for contract oversight seriously and has already started carrying out improvements that go beyond GAO's recommendations. The congressional investigators recommended a cost-control plan and other changes to establish clear procedures and improve oversight.

But Sen. Orrin Hatch, R-Utah, one of the lawmakers who requested the investigation, said, "Millions of taxpayer dollars were wasted to build a website that didn't work, all because of bureaucratic incompetence."

Investigators found that the administration kept changing the contractors' marching orders for the HealthCare.gov website, creating widespread confusion and adding tens of millions of dollars in costs. Changes were ordered seemingly willy-nilly, including 40 times when government officials did not have the initial authority to incur additional costs.

The report faults the Centers for Medicare and Medicaid Service for ineffective oversight. Known as CMS, the agency is part of the Health and Human Services Department and was designated to administer Obama's health care law.

— Contractors were not given a coherent plan, and instead jumped around from issue to issue.

— The cost of a glitchy computerized sign-up system for consumers ballooned from $56 million to more than $209 million from September 2011 to February 2014. The cost of the electronic backroom for verifying applicants' information jumped from $30 million to almost $85 million.

— CMS, representing the administration, failed to follow up on how well the contractors performed.

— A third contract, for fixes to the website, grew from $91 million in January to $175 million as of last month.

Virginia-based CGI Federal built HealthCare.gov, the consumer-facing portal to subsidized private coverage for the uninsured. The site serves 36 states, while the remaining states built their own systems, with mixed results.

QSSI, based in Maryland, was responsible for an electronic back office that helps verify personal and financial information to determine whether consumers are eligible for tax credits to help pay their premiums.

The consumer end of the system locked up the day it was launched, Oct. 1, and was down most of that initial month. The electronic back office had fewer problems.

A few months before the launch, the CMS agency notified CGI it was so dissatisfied that it would start withholding payments. Then it rescinded that decision.

CMS ultimately paid nearly all of CGI's $12.5 million in fees, withholding only $267,000, the report said. The agency later ended its contract with CGI. Another contractor, Accenture, was brought in to make website fixes.

Confronted with a public relations disaster, the White House sent in a troubleshooter, management consultant Jeff Zients. He removed CMS as project leader, relegating it to a supporting role.

CMS administrator Marilyn Tavenner later personally apologized to Congress, saying, "The website has not worked as well as it should."

Nonetheless, Health and Human Services Secretary Kathleen Sebelius stepped down amid complaints by White House officials that the president was blindsided by the problems.

The original contractors testified to Congress that they did not have nearly enough time to test the system before it went live.

Indeed, Tavenner took the unusual step of signing the operational security certificate for HealthCare.gov herself, after CMS security professionals balked. The site has since passed full security testing.

The GAO's findings added to earlier conclusions in a report by Zients after his team got the website to work.

Beyond a maze of technical problems, Zients said he found "inadequate management oversight and coordination" that "prevented real-time decision making and efficient responses."

Obama has already weathered the worst storms from the bungled health care launch, so the report is unlikely to create major political problems for the White House and Democrats generally.

But it does shine a light on what was going on behind the scenes even as administration officials fostered the impression that signing up for health care would be simple, like shopping online.