The USDA is now letting poultry plants conduct their own inspections

Can putting the onus on the industry really make food safer? 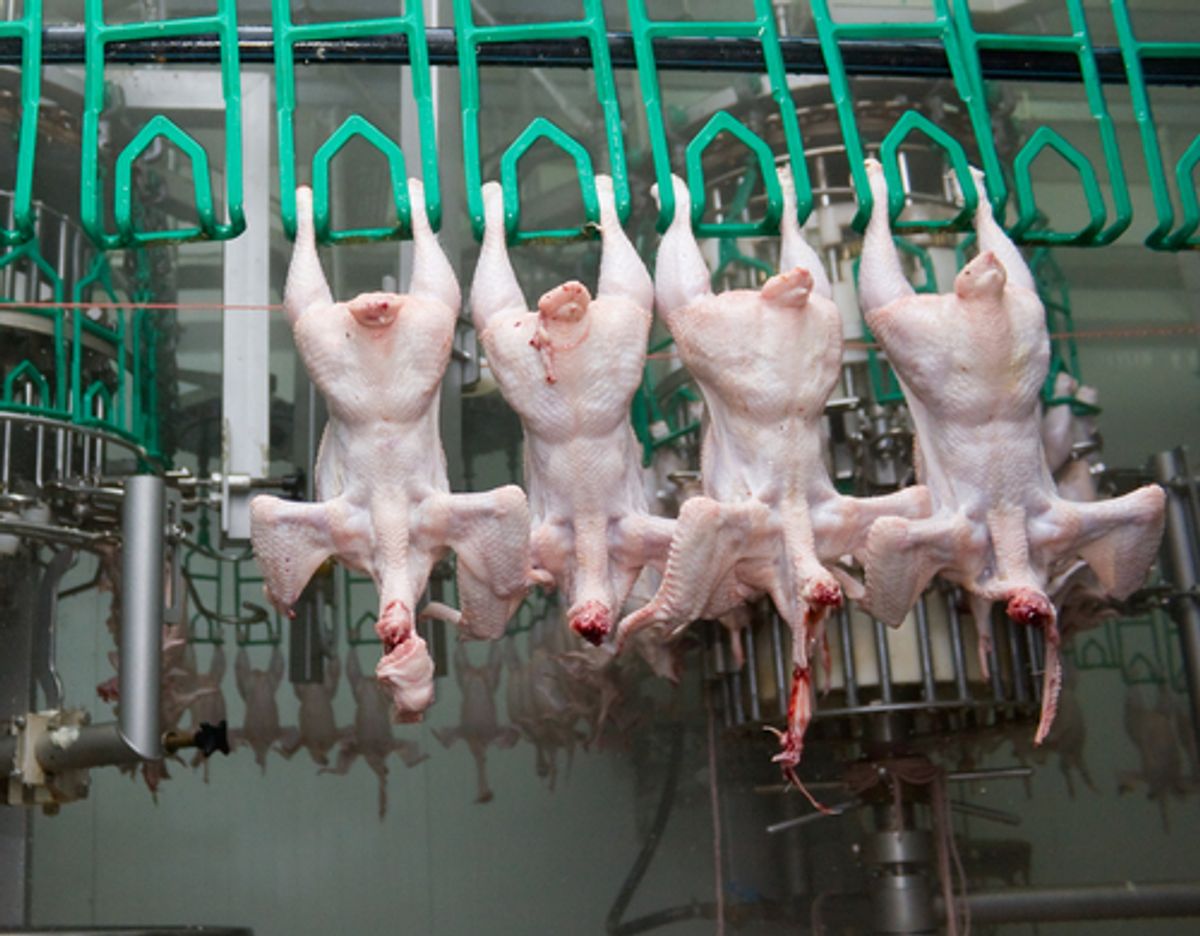 Poultry inspection, prepare to be modernized. Or, if you prefer, privatized. The USDA late Thursday released its revamped poultry inspection rules, an overhaul to the 60-year-old system which, by allowing plants to self-inspect, it claims will simultaneously reduce the number of federal inspectors on site and incidences of foodborne illness.

In the old system, Food Safety and Inspection Service (FSIS) officials were stationed on poultry processing lines to check birds for visible problems, like abscesses and sores, as well as for feces they may have carried over from the factory farms (or as the USDA calls it, "quality assurance"). Now, that responsibility is being (voluntarily) handed over to the plant operators, as the agency plans to phase out 770 USDA inspectors, a move that will save it an estimated $90 million over three years. The move represents a shift in focus, from those visible defects to pathogens like Salmonella and Campylobacter, which can't be spotted with the naked eye. It's for that reason that the USDA boasts the rules will prevent up to 5,000 foodborne illnesses each year.

To the relief of just about everyone (industry excluded) the USDA decided to do away with the most controversial part of the rule: its plan to speed up inspection lines from the already rapid clip of 140 birds per minute to an even quicker 175. The increase, argued unions, watchdog groups and members of Congress, would've had catastrophic consequences for food and worker safety, as well as increased animal abuse.

So at the very least, the USDA won't be making a bad problem worse. But poultry production remains dangerous ("one of  the most dangerous occupations in the U.S." an organizer with Interfaith Worker Justice told Salon's Josh Eidelson last year) and about one million chickens and turkeys are already painfully boiled alive every year, often because lines move too quickly for them to be properly slaughtered (FSIS and the National Chicken Council contend that the number is much lower; according to a USDA spokesperson, the new system further corrects for this problem  by allowing more inspectors to freely move around the plant and observe live birds). Some groups expressed misgivings about the announcement for those very reasons: the National Council of La Raza, the country's largest Hispanic advocacy group, for example, "praised" the USDA for stopping short of making the industry even more dangerous, but they and others criticized the agency for not doing more to drive reform. “It is not a victory for consumers, workers or animals,” Daisy Freund, senior manager of farm animal welfare at the American Society for the Prevention of Cruelty to Animals, told the New York Times.  “They maintained the status quo of line speeds that already move too fast.”

Meanwhile, whether the new system will make poultry safer remains to be seen. A report issued last year by the Government Accountability Office saw fit to raise “questions about the validity” of the USDA's assertion that replacing government inspectors with company employees would help prevent Salmonella's spread. Rep. Rosa L. DeLauro (D-Conn.) maintains it won't: the reduction of USDA inspectors, she said, is a “recipe for more food-borne illness and more people in the hospital.”

And there's still that whole issue of allowing the industry to self-police. Christopher Leonard, who's written the book on poultry industry abuses, told Salon that he thinks shifting the USDA's limited resources toward pathogen testing, along with the decision to back down on line speeds, is a good thing. Still, he said, the decision to put the onus on the industry leaves him with a bad taste in his mouth. After all, just as the economic incentives for speeding up the production line were significant -- about 3 cents per bird times 8.64 billion -- the consequences for shutting the line down to deal with a problem are prohibitively negative. Negative enough, perhaps, to make someone look the other way when abscesses, sores or feces zip by. As Leonard put it, “I wouldn’t want to be Tyson Foods employee tasked with pressing the red button."

“This is an industry that needs to be policed," Leonard added. And unless we can trust that they'll do so on their own, and against their interest, consumers could still be at risk.

8/4/2014 12:45 PM: This post has been updated with comments from the USDA. In addition, a USDA spokesperson notes that it is FSIS inspectors with the ultimate power to stop or slow processing lines if companies are not sorting birds to their requirements.